Dinar crisis goes on in Tunisia

As general elections approach, the government struggles with its committments to the IMF and the safeguard of social welfare.

At the moment, currencies in North Africa look relatively stable. In this context, the depreciation of Tunisian Dinar stands out. 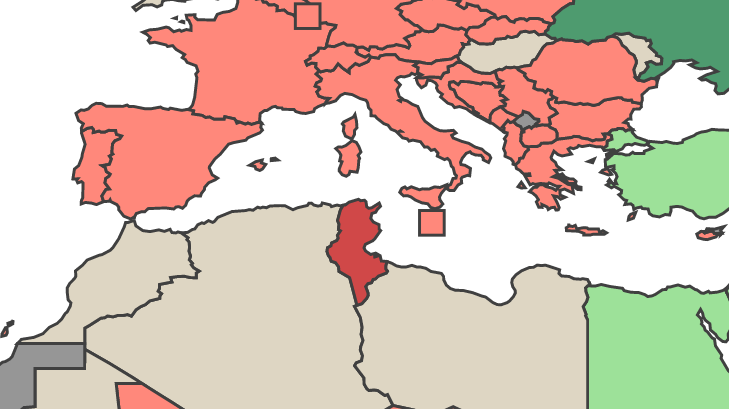 As you can see in the following graph, the currency depreciated by 26.4% against the dollar in the last 12 months. Today the USD/TND exchange rate exceeds 3 dinars per dollar.

Tunisia’s economic hardship is not recent: the economy faces structural problems, that do not show signs of improvement. The currency measures these imbalances.

The present situation is the result of the crisis started in the country in 2011, after the Jasmine Revolution. In Tunisia the revolution has been less violent compared to the other countries in the area, and now the country is transitioning towards democracy; on the economic front, the scenario is more problematic instead.

One of the main factors that contribute to the depreciation is the trade deficit, that has worsened during 2018 compared to the previous year. Therefore, foreign currency demand is relevant, weakening the Dinar. 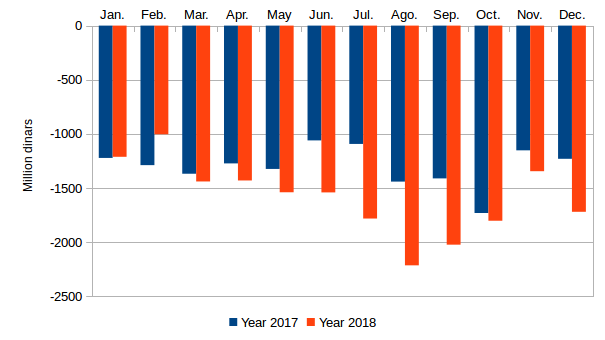 Tunisia and the IMF

In the economic context just described, the relationship with the IMF – started in 2016 to heal and support the economy – looks particularly meaningful. According to the Fund, the country needs to carry out spending cuts and keep a market exchange rate: in other words, let the Dinar depreciate to help restore balance of payments equilibrium.
So, the depreciation is both a natural reaction in the problematic context described above and a policy choice suggested by the country’s creditors. As a matter of fact, the Central Bank of Tunisia (CBT) is not intervening firmly to hold back the weakening of the currency: in the face of a depreciation close to 30% against the dollar in 2018, the CBT rate hike has been lower than 2% (from 5 to 6.75%).
Anyways, letting the Dinar depreciate too much poses a threat: trade deficit could widen even more and import costs could soar. A wider trade deficit, in turn, negatively impacts on the currency.

In this vicious circle, the population ends up suffering the erosion of its purchasing power due to inflation, as it is already happening: inflation amounts to 7.1% y-o-y in January.
Yesterday the UGTT, Tunisian major trade union, obtained from the government a wage increase for a share of civil servants; this has partially calmed social tensions that have been spreading across the country in the last few months. These events show how austerity is weighing on poorer classes, and how the government is struggling with the fulfillment of its committments to the IMF and the safeguard of social welfare.

Accord to StudiaBo pre-estimates for 2018, Italy is the world’s major exporter to Tunisia, followed by France. For companies exporting to Tunisia, exchange rate risk management becomes crucial not only in the short term, but also in the medium to long term. If the current trend is going to be confirmed in the future, this could inevitably reduce Tunisian purchasing power, thus reducing export opportunities in this market.