The growing attention of Italian institutions towards China leads us to focus on the risk of depreciation associated with the Yuan.
Through the analytical model of the factors at play in the dynamics of a currency, used to study the case of Indian Rupee, in this article we analyze the case of Chinese Yuan (Renminbi).
As you can see in the chart below, which shows Yuan’s effective exchange rate from January 2008 to February 2019, the currency showed a general tendency towards appreciation during the decade, except for sporadic periods of weakening. 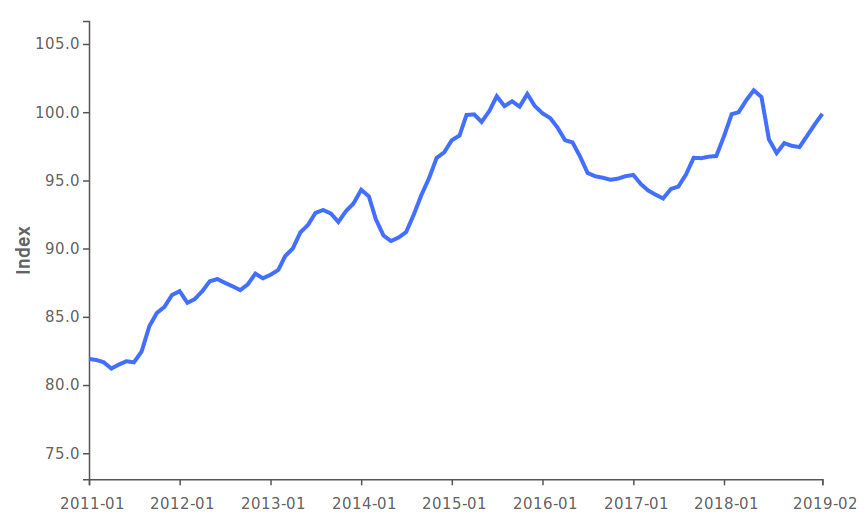 The phases of weakening took place during 3 cyclical periods of lower growth in the Chinese economy: 2014, 2016 and 2018. We can infer these slowdowns from Chinese import data, which showed a contraction, as well as other indicators, such as Industrial Production and Purchasing Managers Indices.
These phases cannot be defined as proper crises but, in the Chinese context of very high growth, a slowdown in the pace of economic growth below 6% stands out: as a matter of fact, such values are much lower than the average ones recorded in recent years.

The dynamic graph shown below allows to analyze the different phases the currency has gone through over the last decade. It also helps identify the influence that macro-factors that impact on exchange rates - such as trade, investments and monetary policy - have had in every period.

Summarizing the dynamics observed in the animated chart, during the phases in which the Yuan appreciated (between mid-2011 and early 2014, in the first half of 2015 and in the second half of 2017), the driving factors were exports and foreign direct investment inflows.
On the other hand, when the Yuan weakened (2014, 2016 and 2018), it has been penalized by lower net exports and portfolio investment outflows, which are attributable either to an increase in Chinese investments abroad or to a reduction in foreign investments in China. In both cases, this means that investors fled Chinese market, given the "crisis" experienced by the economy.

In this context, the action of the central bank (People’s Bank of China) aimed at the contrast of excessive appreciation until 2014, while it moved to the support of the currency between 2014 and 2016. Finally, from 2017 the movements of Chinese foreign exchange reserves indicate neutrality of the monetary policy action, at least through the instrument of the sale of reserves.

Given the enormous production and export potential of the Chinese economy, as well as its significant growth that inevitably attracts investments, we can argue that the currency can maintain its appreciation trend in the near future. Nevertheless, two key variables could cause upheavals in this process: on the one hand, the growing consumption of the Chinese population, which will progressively reduce the country's current account surplus and, on the other hand, the theme of financial markets liberalization, that will cause greater uncertainty in capital flows.