Technical recession and fall in FX reserves, on the eve of local elections

After the crisis experienced in 2018, which reached its peak in September, Turkish Lira has been looking quite "stable" since December: as you can see from the graph below, the currency has no longer shown signs of collapse, helped by a high reference interest rate (24% from mid-September).
Nevertheless, the weakening trend remains: in the last 2 months, the Lira lost more than 8% of its value against the dollar. 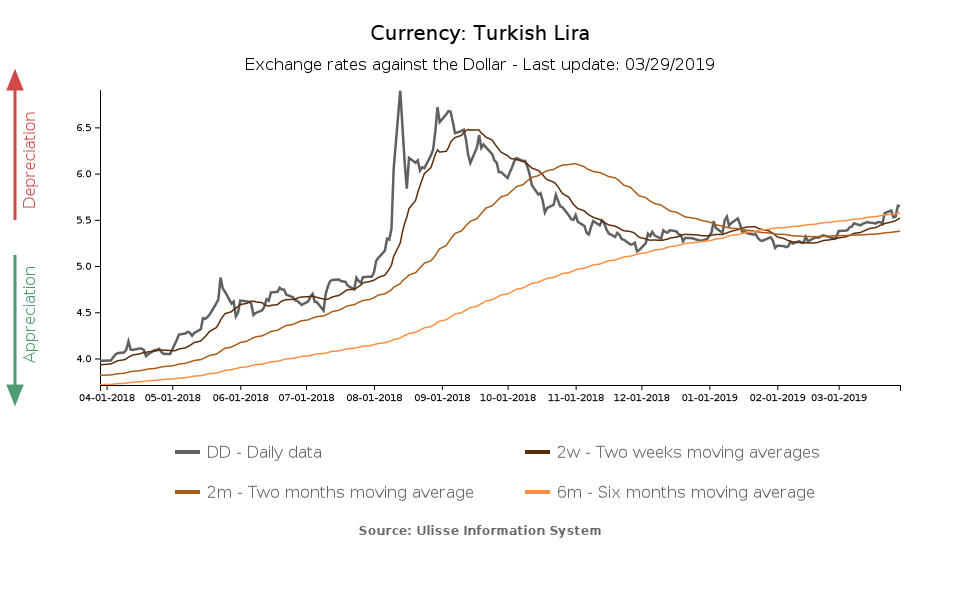 In particular, in recent days the Lira got back in the spotlight for a sharp decrease in central bank's foreign exchange reserves and consequent currency tensions.
Turkish international reserves suffered a significant reduction during the 2018 currency crisis, and then partially recovered. At the end of February the amount of reserves was close to 78 billion dollars; nonetheless, the value is still insufficient according to IMF requirements.
In March, Turkish FX reserves fell again: 71 billion dollars on March 22, according to the data released by the Central Bank of the Republic of Turkey. A 6 billion collapse caused inevitable tensions on the markets and on the Lira.

According to central bank statements, the recent fluctuations in reserves would be driven by ordinary transactions and periodic factors. However, many analysts do not seem to agree: according to them, the collapse in FX reserves would be due to the action of the central bank which, under government influence, could be actively supporting the Lira, since local elections approach. They are due to be held this Sunday, and their outcome could influence Erdogan's leadership, confirming or weakening it.

Given the general economic situation, the government would have good reasons to fear the outcome of the elections. According to the latest Turkstat data, annual inflation remained at 20% in February, after the 25% peak reached in September and October 2018.
At the same time, industrial production is slowing: the index released by Turkey central statistics office shows a collapse in 2019-Q1 (-14% compared to the previous quarter, almost -10% compared to the same quarter of the previous year).
In addition, Turkey has just entered a technical recession: both in Q3 and Q4-2018 the economy recorded a quarter-on-quarter contraction (-1.6% and -2.4% according to the OECD).

Rush to the dollar?

The outlook for Turkey therefore remains bleak. The Turkish population is feeling it firsthand and taking countermeasures. As you can see from the chart below, since this summer the amount of foreign currency deposits held by natural persons has grown steadily, indicating the willingness of savers to protect themselves from depreciation.

Source: StudiaBo elaborations on Central Bank of the Republic of Turkey data.


The greatest risk linked to a rush to the dollar is to exacerbate the depreciation of the Lira.
As long as Turkish government and central bank will fail to tame inflation and restore confidence in the Lira, actions to contain depreciation could therefore prove ineffective.