How Germany has conquered China

Why is Germany the first European exporter to China?

Germany represents China's first European trading partner: around 44% of total European exports to the "country of the Dragon" are German, making Germany the leading European player on the Chinese market.
In 2018 Germany exported goods to China for a total value of 95 billion euros, preceding France (21 billion), United Kingdom (23 billion), Italy (13 billion) and Holland (10 billion). As the following graph shows, the Chinese market share held by German business is far superior to the main European partners, it is around 6% and shows a constant growth.

A macro-industries analysis suggests that the most imported goods from China are those at the base of German production specialization. In fact, 70% of Chinese imports from Germany belong to four macro-sectors: Automotive, Industrial Equipment , Electrical and Electronic Engineering and Pharmaceuticals. 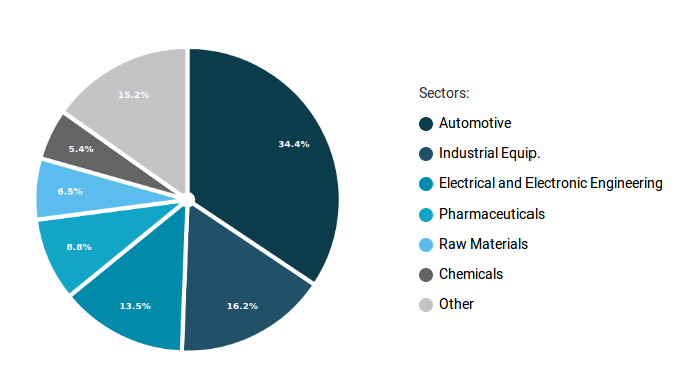 What are the factors behind the German success on the Chinese market?

The explosion of Berlin's export business to Asia takes place at the beginning of 2000, supported by a political class that had seen China as a destination market with high potential. The heavy costs of territorial reunification and the boost for competitiveness of the industrial structure have led Germany to focus heavily on its export activity. Before the European monetary unification, for German ruling class China therefore represented a highly strategic market.
The reported animation traces the historical evolution of German exports on the Chinese market, allowing detailed analysis for types of industry.

At the beginning of the century the penetration of the Chinese market takes place through the export of Machinery and Motor vehicles. With the intensification of trade, between the two economies there emerges a growing integration of value chains, increasing the weight on the total exports of components and intermediate goods. Furthermore, in the last few years German exports of pharmaceutical products have increased significantly.

The analysis suggests that the growth of German exports on the Chinese market is supported by two important drivers: on the one hand a demand factor, on the other a development factor. Thanks to the strong differentiation of their products, German companies have been able to benefit from a rapidly growing export target market: the growing industrialization of the Chinese market and the emergence of a new middle class have indeed sustained the demand for made in Germany products. Furthermore, the growing integration of the two production structures has led to a growth of dedicated investments, as join venture, not only of a productive nature but also for research and development purposes.

However, the growing synergy has led to a greater awareness of the dangers of the Chinese industry, particularly in reference to the discipline of intellectual property theft and the risk that China may become a threat to local industry. In particular, the Federation of German Industries is increasingly expressing itself in favor of a compacted Europe that can sit at the bargaining table with China (read more here).