After the tariffs on steel and aluminum entering into force last June and the tariff threat to American imports of European motor vehicles, the tensions between Washington and Brussels seem to be intensified. The Trump administration has threatened to introduce tariffs on a total EU export value of about $ 21 billion and over 300 customs codes, to which Europe has responded with a punitive countermeasure against $ 12 billion of US export.

Behind the new tensions there is a legal battle conducted within the WTO for more than 14 years and involving the American company Boeing and the European company Airbus, both leaders in the production of aircraft. The judicial conflicts began in 2004 after the accusation brought by Washington against the EU and the United Kingdom, France, Germany and Spain of having provided state subsidies to the Airbus company, causing economic damage to the American competitor and violating the rules in force in the WTO system. This first dispute was joined in 2005 by a second trial initiated by Brussels against the Boeing company, accused of having received illegitimate funding from 1989 to 2006 from various sections of the US government.

The first legal clash led the WTO in 2010 to partially express itself in favor of the United States, giving rise to a mechanism of appeals of various kinds, up to the decision of the Appellate Body of the WTO of May 2018 which had condemned Brussels for not having canceled billions of subsidies paid to Airbus, and which invited the parties to submit to arbitration to decide the extent of countermeasures in favor of the United States.
The second process, initiated by Brussels, resulted in the recognition in 2012 of the legitimacy of the European appeal, and forced the US to modify the state regulation that provides for aid to the US aircraft manufacturer. However, in a recent provision of March 28, the Appellate Body of the WTO recognized the mechanism for total removal of subsidies in favor of the sector as incomplete, recognizing to EU the right to impose countervailing duties on imports from the US.

US tariff threat towards EU products

It is precisely these two decisions issued by the same organization, one in favor of Boeing and the other in favor of Airbus, which gives rise to the new transatlantic tension. The intricate judicial story has given rise to the American tariff offensive and the European counteroffensive; both actions, in fact, claim to compensate for lost sales and damages related to the offenses suffered.

The preliminary list of products targeting by US administration concerns European agri-food exports of wine, oil and cheese, the fashion export of leather goods and clothing, precious metals, earth moving machines, essential oils and also the export of aircraft and aerospace components from France, Germany, the United Kingdom and Spain, as shown in the graph below.

Products targeting by US administration (bln $) 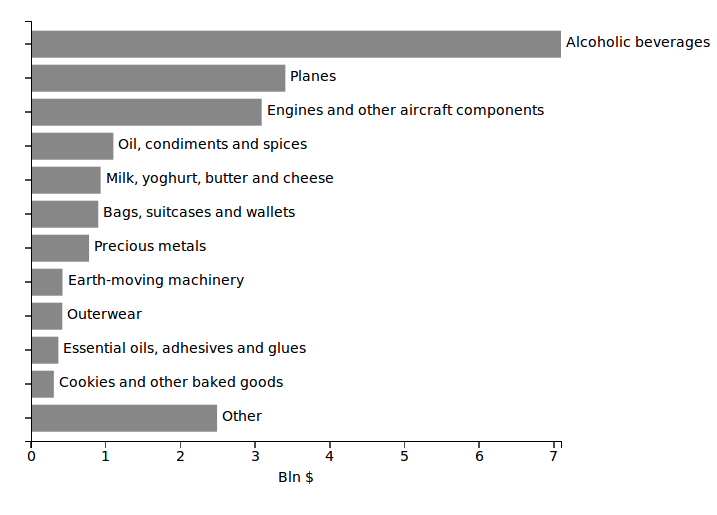 Comparing the weight of Italian exports to those of other EU countries, Italy's high burden emerges in the leather and outerwear products; in US imports of the product codes bearing the threat of an increase in tariffs, the weight of Italian exports exceeds 60%.
The second category of affected products is represented by oil and wine exports: Italian exports of products threatened by tariffs represent 48% and 30% respectively of EU exports to the USA. In other sectors, the burden on Italy is limited. Moreover, the Belpaese is completely exempt from the tariffs imposed on the export of aircraft and aerospace components, to be applied exclusively to the United Kingdom, France, Germany and Spain.

Weight of Italian and other EU countries export for tariff codes 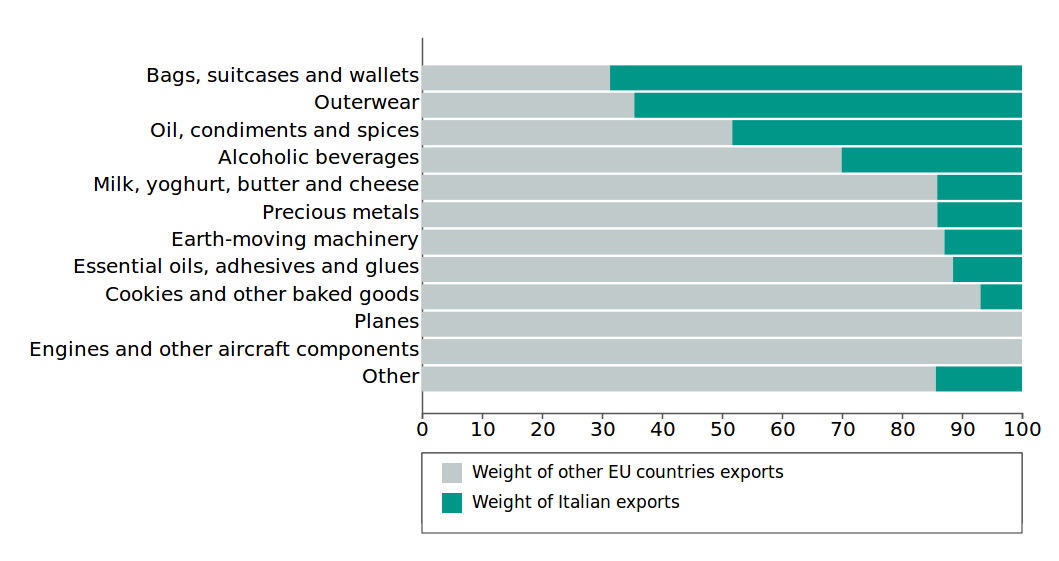 Moreover, the most significant danger is that the "feud" feeds transatlantic trade tensions during the initial phase of negotiations between the United States and the European Union, which have the function of averting US car duties and auto parts made in the EU.
The threatened duties on the automotive sector, in fact, unlike the tariff action just described, are outside the WTO mandate and could lead to a trade war. The fear is in fact that the US, after reaching an agreement with China, can maintain a tight front against Europe by shifting the main focus of the trade war to the Old Continent.