Uncertainty and pessimism reign supreme over the pound. After recovery phase during the first three months of 2019 that was driven by growing expectations of reaching an agreement with the EU, at the beginning of May the British currency entered a new phase of weakening leading the pound to lose approximately five percent of its value against the euro.
The main reasons for this movement essentially lie in the following three factors: 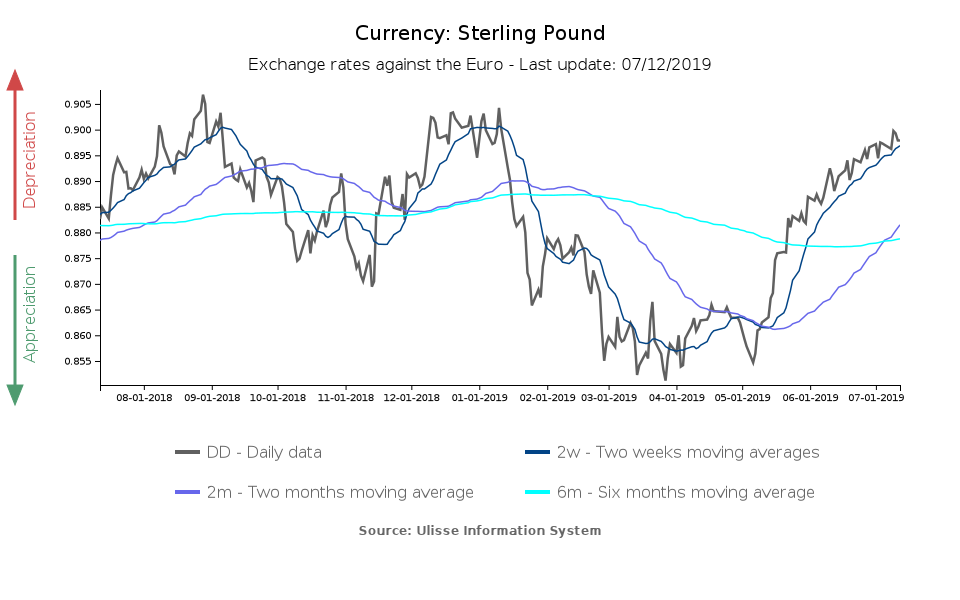 After May: Greater uncertainty and a hard Brexit?

Recent events in British politics present a scenario of increased uncertainty. After postponement of the 29 March deadline for Brexit and agreement of a new date (31 October 2019), on 24 May, Prime Minister Theresa May announced her intention to resign. Consequently, since 7 June the UK has effectively lacked a PM and the race to find a new one has begun.
Competition to replace Theresa May has now narrowed to a clash of two candidates: one is the former mayor of London Boris Johnson, and the other is Secretary of State for Foreign and Commonwealth Affairs Jeremy Hunt. The outcome of a vote will be announced on 23 July; currently, the front-runner is Johnson, which makes the prospect of a hard Brexit more likely.

A further element weighing on the pound is the recent weak performance shown by the British economy, which has suffered from the ongoing stalemate over Brexit, tensions related to the US-China trade war and to the global economic slowdown.
In Q4-2018 and Q1-2019 the economy grew by 0.2% and 0.5% respectively (Y-o-Y). Furthermore, the Bank of England (BoE) expects flat growth in Q2-2019. The relatively high growth rate recorded in Q1-2019 could actually be positively “biased”, because of a stockpiling effect caused by the previously expected 29 March Brexit deadline.
Data for the whole of Q2 are still to be announced, but monthly figures released by the Office for National Statistics (ONS) show that the British economy returned to growth in May, registering + 0.3% compared to the previous month; this followed a contraction of 0.4% in April. The growth recorded in May exceeded the expectations of many analysts, who anticipated a further contraction and were already raising the spectre of technical recession.

Retail sales data recently released by the ONS have also contributed to the current climate of uncertainty. In May, British retail sales contracted both in terms of volume and value, compared to the previous month.

In this context, a rate hike to support the currency would seem possible. But in contrast, BoE president Mark Carney recently stated that the BoE might cut rates in the near future, if it proved necessary to soften the economic impact of a hard Brexit.

Thus, for the time being, market sentiment points towards a weakness of the pound, which could worsen if a no-deal Brexit were actually to be realised.