Shadow of Recession over German economy?

An analysis of external trade data

The worsening of commercial tensions and the consequent slowdown in global trade are increasing international uncertainty. These factors, together with the persistent risk of a no-deal Brexit, are weighing down the Eurozone’s economic situation, already suffering from the industrial reorganization of the automotive sector.
The most recent publication of the ifo Business Climate Index, which records a further decline of German CEO's expectations about the national economic outlook, has raised signs of concern regarding a possible German recession and a Eurozone slowdown.
The index rates the current German business climate and measures expectations for the next six months: for these reasons, it is considered a leading indicator of the performance of German and European production.

Due to the imminent risks on the Eurozone economy, it is important to have reliable data to analyze market potential. International trade data available on ExportPlanning allow us to map German slowdown through consistent data about German imports. 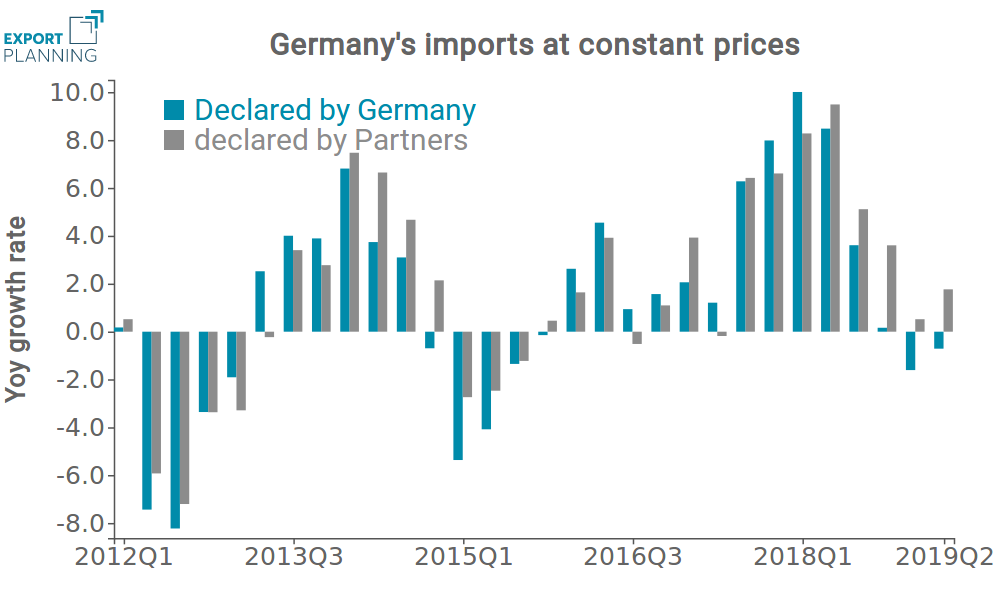 The two series suggest a basically coincident dynamics, signaling the robustness of the statistical measure. Although the signals regarding the first six months of 2019 are not coincident, it is clear that both measurements show a slowing down in German imports. The result supports the hypothesis of a sharp industry slowdown in Germany, in line with the expectations of economic operators and analysts' estimates.

It is possible to obtain a more detailed analysis of the main industrial sectors in the following graph: the figure shows the German imports by product, positioned according to the growth rate recorded in 2018 (x axis) and in the first half of 2019 (y axis). In this way, it is possible to observe the sectors that have suffered of a sharp deceleration in the lower right area of the graph.

German economy is affected by a generalized slowdown, which involves almost all categories of traded goods. The most significant slowdown has been shown by Intermediate goods; among them, particularly noteworthy is the negative performance recorded in the following sectors: components for the means of transport, electronic components and intermediate metal goods. This result signals the difficulties of German manufacturing industry, especially in the automotive industry.

Consumer goods recorded a sharp slowdown, as well; the slowdown is particularly marked for Fashion, while Agrifood and the Household goods don't lose ground (y-o-y).
Also symptomatic of the current low economic situation is the performance of Capital goods. Indeed, the bearish expectations of economic agents have determined a substantial slowdown in the demand for investment goods. In this context, the dynamic signaled by German imports of means of transport is an exception; anyway, this is due to a very dynamic trend recorded in the import of aircrafts and ships.