Latest data confirm what has been known for months: the automotive industry is experiencing a phase of slowdown, not only in Europe but worldwide. As document in previous articles, the factors behind the slowdown can be summarized as follows:

The availability of complete data on production and sales in 2018 for more than 100 countries (see the Automotive database in the Analytics section of the platform) makes it possible to analyze the current phase of slowdown and evaluate the performance of the automotive industry in 2018 compared to the previous year.

2018 data suggest that the car sector has been experiencing more difficulties compared to the commercial vehicles segment.

Globally, car production declined by almost 3% in 2018 (in terms of units).
Although the ranking of top producers has remained unchanged - featuring China, Japan, Germany, India, South Korea and the United States - major car manufacturers registered a decrease in the number of cars produced in 2018, compared to 2017. With the exception of India (+2.6 %) and Japan (almost zero growth), figures range from the disappointing -9.3% variation recorded for Germany to a smaller 2% contraction in South Korea; production decreased by 7.8% in the USA and by 5.1% in China.
On the contrary, Russia, Romania, Portugal and India showed the most relevant positive variations in the number of cars produced.

Foreign trade data further confirm the ongoing slowdown. Global demand for cars (in units) showed a slight slowdown in 2018, after reaching a peak in 2017. 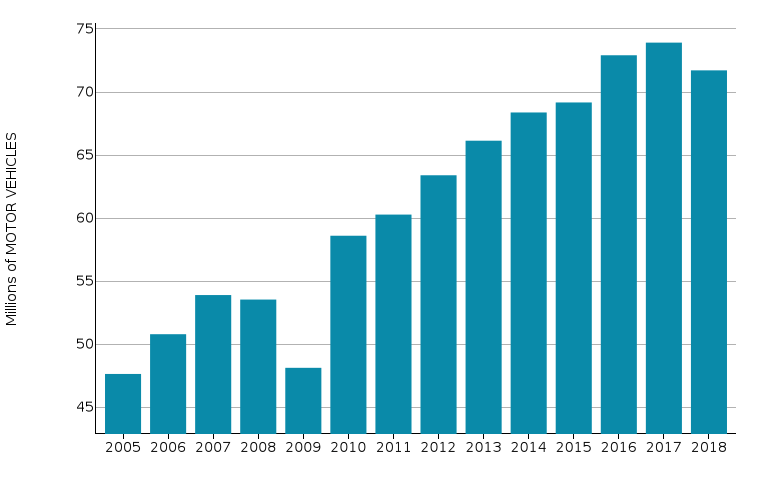 Unlike the negative trend shown for the car sector, estimates available for the commercial vehicles segment show a dynamic growth in 2018, both in terms of production (+4.2%) and sales (+5.6%).
Major producers showed generalized growth in terms of number of vehicles: +4.4% for the US, +1.7% for China, +15.4% for Mexico and +2% for Japan.
In addition to being the major commercial vehicles producer, the United States also ranked as major market in 2018 and recorded a significant expansion of sales (+8% in terms of units); significant growth for China, Canada and India, as well. Sales also expanded in relatively smaller markets, such as Brazil (+16%) and Spain (+21%).

Graphs shown below summarize the dynamics described so far, as regards production (Graph 2) and sales (Graph 3), focusing on the top 10 global players. The percentage shown on the right indicates, for each country, the variation in the number of vehicles produced (Graph 2) or sold (Graph 3) in 2018 compared to 2017. 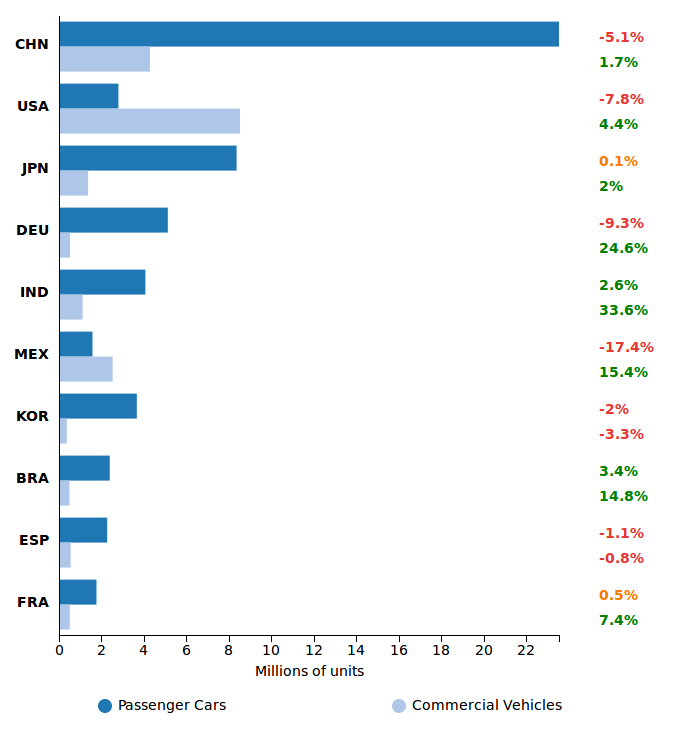 The overall production picture suggests that a positive growth trend for both cars and commercial vehicles is quite rare (see India and Brazil). Decreases in production or stagnation prevail, especially for the car sector. On the contrary, the commercial vehicles segment shows positive variations for all the top manufacturers, but South Korea and Spain. 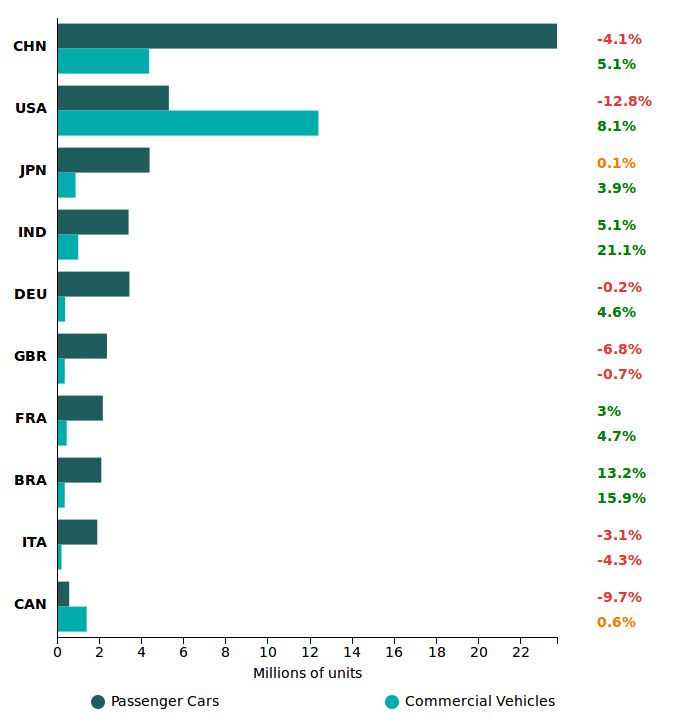 Quite similar scenario on the sales front. In the ranking of the 10 largest markets for motor vehicles, only two of them showed sustained growth in registrations in 2018, namely India and Brazil; smaller positive increase for France, while Italy and the UK showed a contraction in both sales of cars and commercial vehicles.

The analysis therefore confirms that, in the last year, the automotive industry found itself among the victims of the global economic context, characterized by uncertainty and commercial tensions that do not favor corporate investment. This has combined with the sector's own challenges, first of all sustainable mobility, and the shift in consumer needs: consumers are now starting to demand a service - mobility - instead of a product - cars.
For the automotive industry, critical challenges therefore extend over several fronts: on the one hand, the great challenge of innovation, about which companies can directly intervene; on the other hand, the unfavourable general economic context, against which companies do not have any leeway. It is therefore likely that a sustained recovery of the industry will be achieved only by overcoming both these sources of tensions.