The WTO Decision could exacerbate transatlantic and intra-European tensions

This article was written in collaboration with Massimo Ortolani, International Consultant.

On 2 October, the World Trade Organization (WTO) authorized the US to impose duties on EU exports for a total value of 7.5 billion $, as compensation for the subsidies considered illegal that some European states have provided to the European Airbus aircraft manufacturer. The ruling is the resolution of a legal dispute conducted at the WTO for more than 14 years, which saw the European company oppose the American company Boeing; for additional details see the article USA-EU: new front of the trade war?. Duties will come into effect from October 18, however the last meeting between the US and EU delegations is set for October 14, aimed at limiting in extremis the tariff application.

The final list of American duties on European export, in addition to introducing a 10% rate on aircraft exports from France, Germany, Spain and United Kingdom, founding countries of the Airbus consortium, envisages an action aimed at the exports of others EU member countries, mainly affecting agri-business products with 25% tariffs.
American tariff action, in fact, on the one hand has limited the tariff application only to some specific categories of commercial aircraft, on the other hand it has affected different categories of products exported with different treatment to different Member States. In terms of value, the European countries most affected are France and Germany, with an affected value of $3 billion and $2.3 billion respectively, followed by United Kingdom ($1.8 billion).

The graph below shows the differential tariff treatment among EU Countries by sector: the Engineering exports are the most affected in the case of Germany and France, while the tariffs are almost entirely due to Agri-food exports in the case of Spain, United Kingdom and Italy .

Fig 1: US tariff on EU exports, by sector 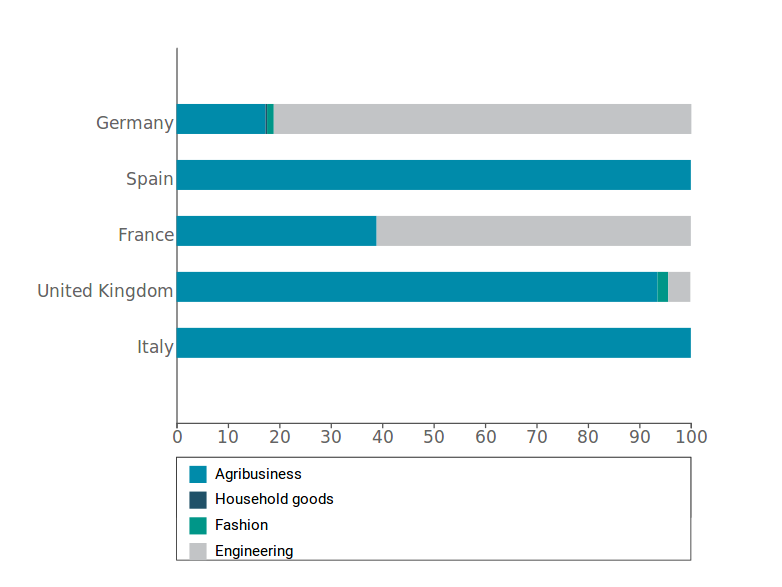 Furthermore, focusing the analysis on some agri-food products, the differentiation of treatment for the purposes of US tariff taxation is further articulated.
The following table allows you to compare the tariff treatment of agri-food products considered "commercially comparable", which means we consider food products distinguished by similar characteristics, perishability and consumption. The table shows both the total value of EU Countries export to the US and the export share hit by tariffs, based on the final list.

In the case of cheeses and dairy products (milk and yogurt), it is clear that France is completely exempt from tariffs, despite having considerable export values on US market; on the contrary, about 70% of Italian cheese exports and almost all of the English, German and Spanish exports are affected.
By contrast, in the case of alcoholic beverages, Italian exports of wine have been completely exempted, while the tariff coverage of French exports is around 90%.
However, France is exempt from spirits tariffs, which instead hit Germany, Italy and above all England. For olive oil exports, the hardest hit country is Spain, while Italy is completely exempt from tariffs.

As shown by the analysis developed, the US administration has used a highly differentiated tariff strategy on European exports, which is a potential threat to the competitive balance of EU member countries. This strategy might put EU member countries producing competing products into serious competition (think for example of Italian and French wine), and might intensify intra-EU tensions.
Furthermore, some Member States, individually or through the EU, may require the US to take into account their "specific weight" within the Airbus Consortium; Italy, for example, had already proceeded in July, in isolation, to plead its laws in the USA to defend Made in Italy products.