Argentina is Still in the Grip of the Crisis, while Turkey shows Signs of Improvement

This week, most of currency discussion focused on Argentine peso and Turkish lira; both currencies experienced dramatic crises in 2018 and are now back at the center of media attention for different reasons.

Argentina is heading to the polls, facing the chance of a Peronist comeback

This Sunday, October 27, Argentina will hold its presidential elections. The outcome looks quite predictable, on the basis of the outcome of August primary elections that, in Argentina’s electoral system, precede presidential elections, therefore mapping voting intentions: according to the results emerged in August, most observers consider it unlikely for the incumbent president Macri (center-right, business-friendly approach and appreciated by the markets) to be reelected. Instead, the victory of the Peronist Alberto Fernández is almost taken for granted.
Based on this scenario, Argentina's investors and creditors expect increased market volatility and a likely continuation of the current weakness of the peso, given that the challenger's policy proposals look quite devoted to spending, in a context of already deep economic crisis and indebtedness.

Mauricio Macri has been in power since 2015, after 8 years of Peronist government led by Cristina Fernández de Kirchner. He was supposed to restore the Argentinian economy, but he has clearly failed to deliver on his promises, in a context of galloping inflation and record depreciation, both in 2018 and 2019. From the beginning of 2018 to present, the peso has depreciated by more than 200%; monthly inflation (yoy) has been hovering around 50% for a year now. 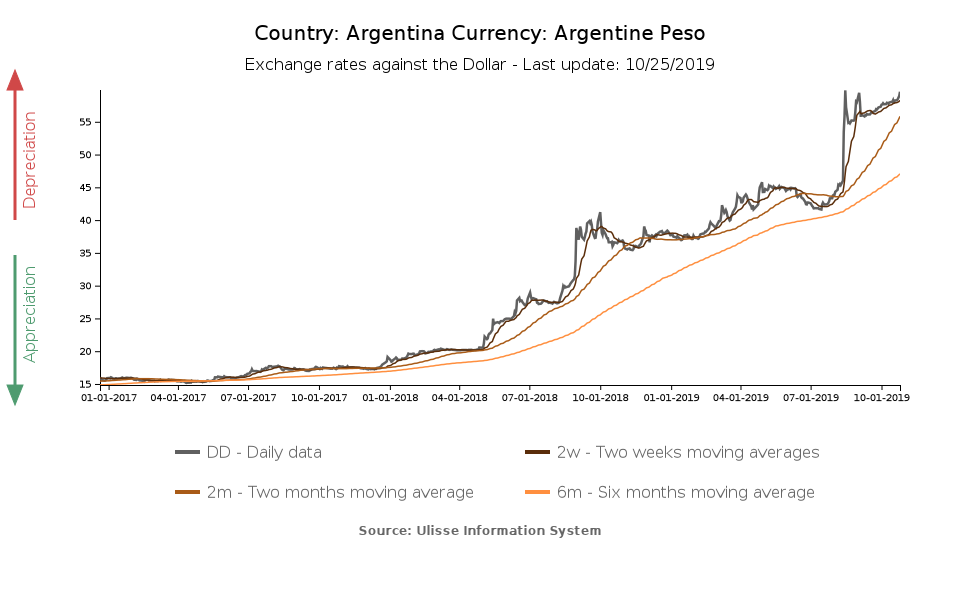 The deep crisis that the Argentine economy is experiencing is recorded by macroeconomic indicators: in 2018, GDP at constant prices contracted by 2.5%; IMF forecasts for 2019 signal a further drop, -3.1%.

As regards Turkey, analysts were surprised by the recent monetary policy decision of the Central Bank of the Republic of Turkey (CBRT) to cut the reference interest rate (1-week repo rate) beyond expectations (-250 basis points), bringing it to 14%.
Multiple reasons lie behind this choice: 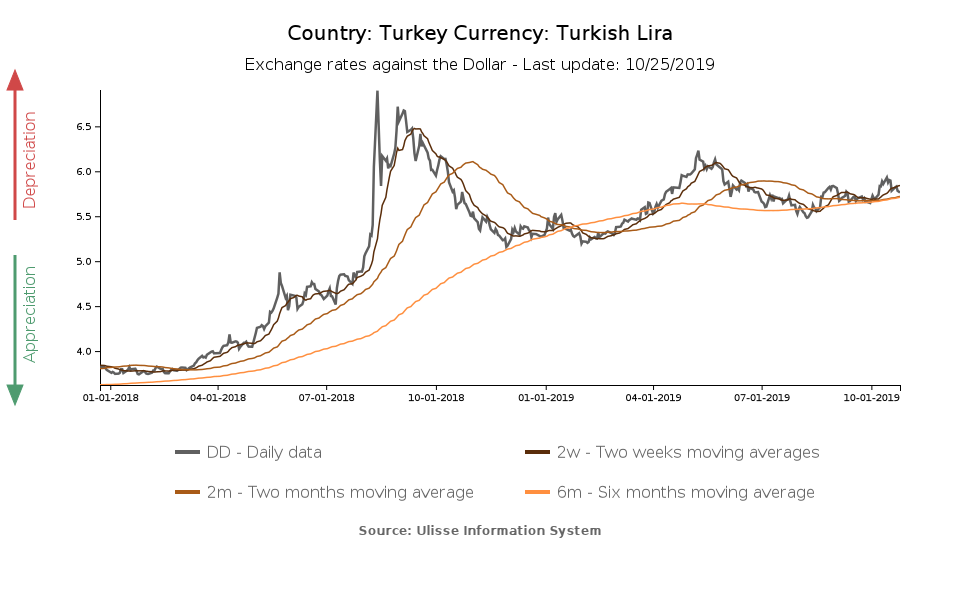 The recent easing of geopolitical tensions might have contributed to the CBRT decision, as well. In the second week of October, Turkey invaded Syria; international condemnation followed, together with the threat of sanctions by US President Trump. The threat was later withdrawn, following a ceasefire agreement. It is therefore likely that the easing of tensions led the central bank to consider its room for manoeuvre as increased, thus contributing to the decision of a significant rate cut.