Protectionism and Weaknesses in Global Economy: Evidence from International Trade

CPB and ExportPlanning indexes report a decrease in global demand

Global economic weakness marks out the current international situation. One of the key indicators of economic performance is the Purchasing Managers’ Index (PMI) which summarizes the prospects regarding the levels of industrial activities based on business purchases. As shown in the chart below, Manufacturing PMI experienced a gradual decrease during 2018, falling below the threshold of 50 in recent months. This is the sign of a significant slowdown, since it indicates that most of the purchasing managers interviewed expressed bearish prospects for global manufacturing activities.


Establishing how much of the current slowdown is attributable to the US-China trade war or, more generally, to President Trump's protectionist measures, is trivial, but expectations of international economic operators have been abruptly worsened by the trade war uncertainty.
The list of threats and protectionist actions carried out by the Trump administration is particularly long and begins precisely in the early months of 2018 when, after the imposition of tariffs on solar panels and washing machines, the American administration hit steel and aluminum. The threats against Mexico and Canada for the renewal of the NAFTA, together with the actions against China, have represented two further developments of the American protectionist path, up to the open battle against the EU.
Under this set of events, business expectations about future output has experienced a significant reduction, but what were the effects on international trade?

The effects on international trade From the second half of 2018, the growth of international trade flows - measured in current US Dollars - experienced a downward trend.
As reported by the CPB index and the ExportPlanning index, the Y-o-Y growth rate of international trade started to slow down since mid-2018, to turn negative in early 2019 due to the intensification of the US-China trade war.
However, these indexes reflect not only world trade changes in terms of volume, but also the effects of exchange rate and price adjustments, particularly clear during the 2015-2016 period, when the US Dollar experienced a phase of appreciation.

To extract from this indicator the component that only measures the growth of international trade in terms of volume, it is necessary to deflate international trade index with a price index in US Dollars. Various methods exist to carry out this deflation.
The CPB Netherlands Bureau for Economic Policy Analysis deflates the trade flows through a price index obtained by considering the exchange rates of the various currencies and the inflation rate in the various countries, derived from consumer, wholesale and production price surveys. ExportPlanning deflates the trade flows at single Harmonized System code (over 5000 product codes) level using the relative average unit value and then re-aggregating.
The following graph shows the dynamics of world demand at constant prices calculated by CPB and ExportPlanning (the 2019 figure is calculated based on the first 7 months of the year). The two measurements, despite being result of different methodologies, are very similar to each other and lead to consider them as reliable measurement methods to analyze world trade performance. 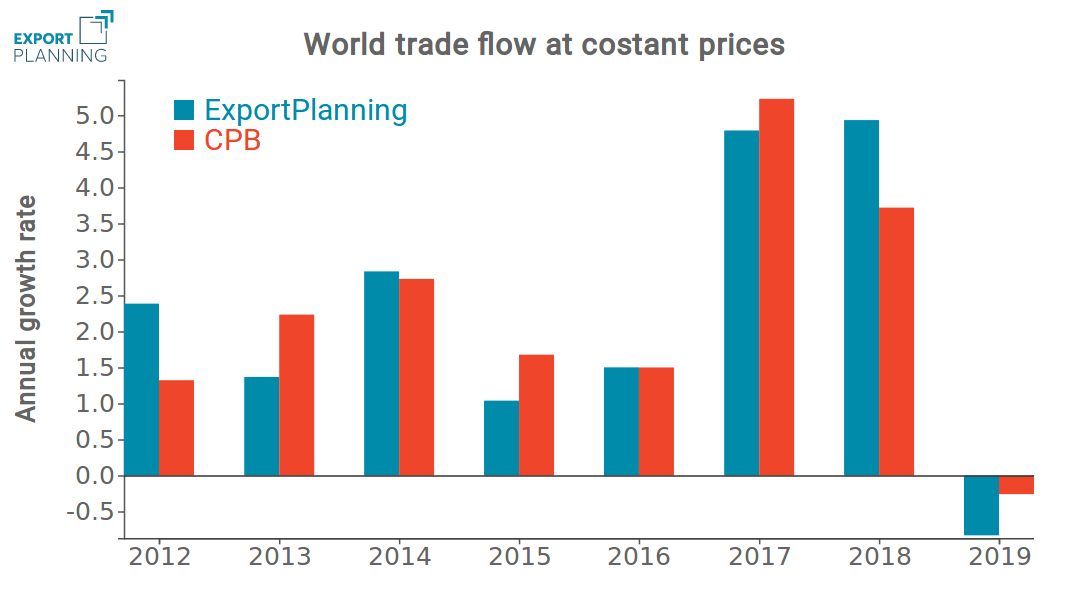 World trade has entered a phase of substantially zero growth, if not contraction in terms of volume. The trend is particularly negative, especially compared to the growth experienced during 2017 and 2018. Although the contraction is not wide, in this century world trade growth entered negative territory only during the Great Recession in 2009 and the bursting of the dot-com bubble in 2001.

The weakness of the current economic situation seems to be deeply linked to the stagnant dynamics of international trade, caused by the protectionist turn of the American administration.
In an increasingly globalized world and internationally integrated value chains, a reduction in international trade has materialized into a significant threat to global production levels. In fact, trade seems to be one of the main drivers of the growth of the world economy, whose loss shifts the weight of growth to the services sector, which seems to show a greater degree of resilience compared to the weakness of the manufacturing industry. The presence of fiscal policies aimed at keeping the world economy on a growth path is becoming more and more relevant, in order to amplify the effects of monetary policies, which would otherwise have a limited effect in most cases.
Based on the forecast scenario of the International Monetary Fund, global growth - measured by aggregating the values of the different countries measured in $ - in 2019 is estimated close to 2.5% . In the years ahead it should show a slight acceleration, remaining within the 2.5%-3.0% range. The hypothesis of this scenario, however, necessarily presupposes that the Trump administration begins to acknowledge that the trade war is not giving significant results in terms of rebalancing the US trade deficit.