The currency shows resilience, thanks to its peg to the US dollar.

For months now, the Hong Kong Special Administrative Region (SAR) has been the focus of media attention for its violent street protests, which started to oppose an extradition bill and then reached broader issues relating to democratic freedoms. The effects of the ongoing unrest are starting to weigh on the country's economy, while the currency - the Hong Kong dollar - has not shown dramatic reactions, thanks to its peg to the US dollar.

A former British colony, Hong Kong gained its independence and became a SAR of China in 1997. A few years earlier, following the start of dialogues between the UK and China over the handover of Hong Kong, the currency suffered a confidence crisis and a consequent sharp depreciation. In 1983, the currency was pegged to the US dollar (Linked Exchange Rate System, LERS). In the following years, the peg has granted stability and development to the economy of the country, which now constitutes one of the largest global financial centers.

Following the street protests that started in early 2019, one of the issues raised by economists and international observers was the possibility that the dollar peg could be questioned, in the face of a situation now critical on several fronts. As a matter of fact, Hong Kong's economy is suffering as a result of the unrests, trade war and the slowdown of Chinese economy.

As you can see from the chart, the Hong Kong LERS system allows the currency to fluctuate in the range of 7.75-7.85 HKD for 1 USD. The dynamics of the last 5 years shows a relative stability before 2017, followed by a depreciation in 2017 - simple consequence of the large amount of cheap liquidity available in the economy. Since 2018, when the trade war began, and then in 2019, when unrest started, the HKD exchange rate has constantly remained at the top of the fluctuation band.

Several factors seem to threaten the stability of the peg; nonetheless, most analysts agree that an unpegging is extremely unlikely. The reasons can be summarized as follows: 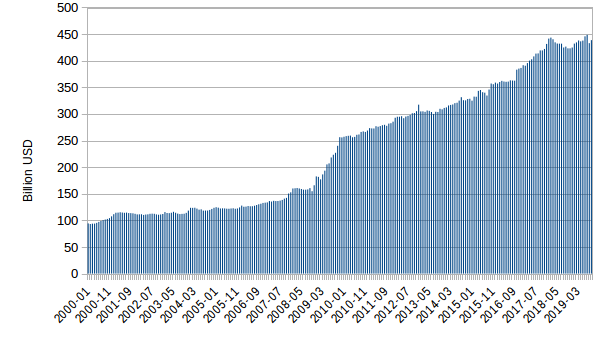 While on the currency front the situations look, all in all, under control, Hong Kong is beginning to suffer blows at the economic level.

Although macroeconomic fundamentals are sound, the concurrent effect of domestic chaos and a weak international economy is weighing on the Hong Kong's economy. If the context of global uncertainty and weak growth is now becoming a new normal, the resolution of the discontent at the root of social unrest emerges as a priority for an effective improvement in the country's short-term economic prospects.