Central Banks Take the Field: Will it be Enough?

The past week has been characterized by two main trends on currency markets: the persistence of tensions on emerging markets' currencies (as discussed last week in this article), and the first central banks' response to the Coronavirus emergency, aimed at supporting national economies.

With regard to the performance of emerging markets assets, the MSCI Emerging Markets Index showed a slight rebound this week (+3.2%), compared to last week's 3-month low. As regards to exchange rates dynamics, on the other hand, the main currencies of the EM cluster confirmed the depreciation trend reported last week, as can be seen in the graph below.

As you can see from the graph, the Coronavirus effect is still there, and is still strong. From a mere financial shock, driving a mass flight from risky assets, investors' fears are now becoming more and more entrenched: there are fears of a serious damage to global economic growth, due to reductions on the demand side, especially for the services sector.
In this context, emerging countries' currencies are the most exposed to external shocks, due to less robust economies that prove to be more vulnerable to external shocks.

Concerns about the serious impact of the epidemic on economic growth have prompted the central banks of several Western countries to act this week; emerging countries’ institutions may soon follow their steps.
The US Federal Reserve led the way: with a surprise meeting on March 3, the Federal Open Market Committee cut the target range for the federal funds rate by 0.5% to 1/1.25%, in order to address the risks posed by the Coronavirus to American economic activity. The FED has also hinted that it is ready to make other cuts, if deemed necessary:


"The Committee is closely monitoring developments and their implications for the economic outlook and will use its tools and act as appropriate to support the economy."

The following day, the main Wall Street indices showed a slight increase; however, the rebound was lower than expected. The general opinion is that rate cuts will not significantly limit the damage to aggregate demand; it is hoped, however, that they will provide minimal support to financial system and market sentiment.

The effect of the reduction in interest rates on the dollar exchange rate was immediate, accentuating the dynamic already highlighted last week. On Friday, also due to fears of a possible health emergency in the US, the greenback fell to $1.13 per euro. 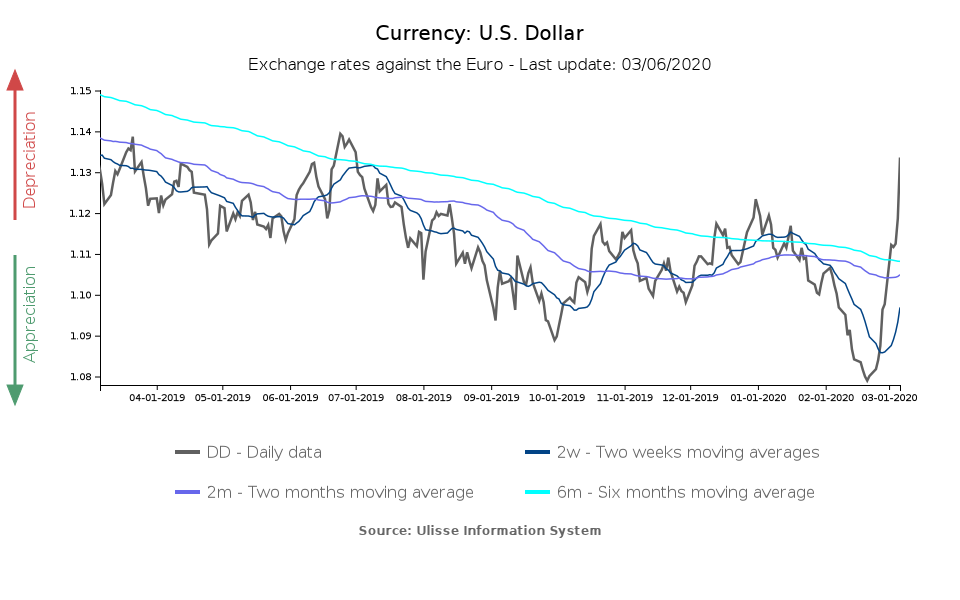 On March 3, the Reserve Bank of Australia took action as well, cutting the reference rate by 25 basis points to 0.5%.
The next day the Bank of Canada acted in the same direction, lowering its reference interest rate by 50 basis points to 1.25%, in order to respond to the "material negative shock to the Canadian and global outlooks" caused by COVID-19. For Canada, moreover, this rate cut is part of a bigger picture of pre-existing weakening of the economic activity, which the epidemic could clearly worsen: in Q4-2019 Canadian GDP growth slowed to 0.1% QoQ (constant prices), from 0.3% in the previous period.

A “bazooka” out of ammo

In the cases just described, central banks have acted in a context where there is still room for manoeuvre in terms for monetary policy. This is not the case for the European Central Bank (ECB) and the Bank of Japan (BoJ), which operate in a context of zero or negative rates, but from which, however, markets now expect action, following the intervention of the FED. The next few days will disclose what measures will be taken, since both the ECB and the BoJ have stated that they are ready to take appropriate and targeted measures.
In addition to that, uncertainty hovers over the issue of the effectiveness of monetary policy which, according to many analysts, may be limited in this context: since it is not a financial crisis but a health crisis, the opening of central bank taps may not be effective in containing markets tensions, failing to act on their root causes.