The baseline case studies of euro, dollar and pound

A major risk to be considered when drafting an internationalization project, in particular during the market research phase, is exchange rate risk.
Exchange rate risk can be analyzed from different points of view: in the short term, it is relevant for exporters when they are collecting a payment in foreign currency, and they may find themselves collecting a smaller amount than agreed, due to a weakening of the currency involved in the transaction.
ExportPlanning Exchange Rate Risk Index (access the database) is intended as long-term risk, as it is calculated taking into account structural elements related to countries and their economies. The indicator can therefore provide support in assessing the potential of a foreign market, together with other risk indicators (country risk, credit risk etc.), with a view to developing a medium-to-long term internationalisation project. A long-term exchange rate risk index also allows to assess the degree of risk associated with the possibility of a loss of consumer purchasing power in a foreign market, in the face of a weakening of its currency.

On the basis of these pillars, an exchange rate risk world map can be drawn as follows.

As can be seen from the map, the index proves to be generally in line with other risk indicators, being relatively low for developed countries, higher for Africa, Asia and Latin America.

For a better understanding of the exchange rate risk index, we proceed to analyse and compare some use cases.

The graph above compares the cases of Great Britain, the United States and Germany, therefore the exchange rate risk respectively associated with the pound, the dollar and the single currency1. As can be seen, the exchange rate risk associated with the sterling is significantly higher compared to the other two currencies, with an index (IDX) of 46.9/100 (22.1/100 for the dollar, 10.6/100 for the euro).

Starting from the pillar "Currency overvaluation and inflation forecast" (PPP), the dollar shows the highest score, closely followed by the euro and the pound; all three currencies present a relatively low risk in this respect.
This pillar is based on the Purchasing Power Parity theory, according to which the exchange rate should equalize the prices of the same basket of goods, expressed in two different currencies; otherwise, the presence of an arbitrage would eventually lead to the same result. According to this theory, if a number of assumptions are verified, exchange rates should then converge towards an “equilibrium” value. If the currency is overvalued compared to the supposed equilibrium, the risk of depreciation is therefore considered high, and vice versa.
Inflation forecasts for the coming years are also taken into account in the computation of this pillar: in the face of high expected inflation, the risk of currency depreciation is high. This is not the case for the countries considered here, where inflation tends to be low and stable (around 2% in 2019 for the United States and Great Britain, lower for the Eurozone).

With regard to the "Monetary resources" (RES) dimension of the exchange rate risk, the radar graph shows a risk for both the pound and the dollar. This can be attributed to their current account deficits (-2.5% of GDP for the US and -3.5% for the UK in 2019, according to IMF data). The presence of a large current account deficit, especially if not offset by adequate FX reserves, can in fact constitute a cause for depreciation.
The presence of foreign direct investment and portfolio investment inflows can mitigate the risk: this is the case for both the US and the UK, which tend to be net beneficiaries of foreign investment. 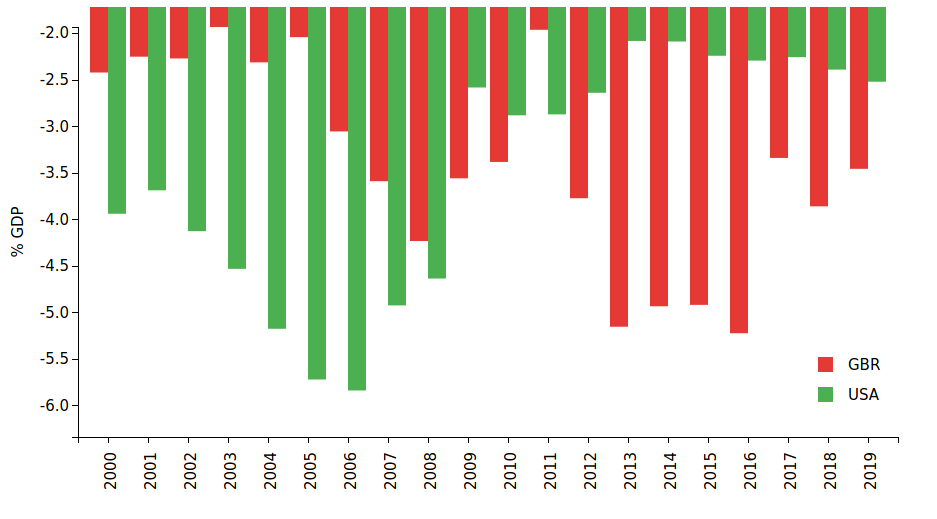 In this respect, the risk associated with the Eurozone is lower, due to its overall current account surplus.

Key elements that guide the decisions of global financial actors include intangible factors, such as trust and market sentiment; credibility (CRED) in their eyes, both of the currency itself and of the country where it is used, is therefore a relevant factor in the definition of exchange rate risk.
A country that shows, for example, a high risk of war or political unrest would not be considered reliable in effectively supporting its currency in the event of a depreciation; the exchange rate risk associated with it would therefore be higher compared to a politically stable country.
With regard to the concept of credibility strictly linked to the currency, we refer here to the historical dynamics of the exchange rate: if there have been few or minor depreciations in the past, the "history" of stability of the currency would grant it credibility and, consequently, a low depreciation risk.

For all three cases analyzed here, the credibility of the country is clearly high (low political risk, high institutional quality); on the other hand, the countries differ in terms of exchange rate dynamics in recent years. Looking at the data from 2016, we can see a slow strengthening for the euro and the dollar over time, while the pound, after the blow suffered with the Brexit referendum, has never returned to its previous levels. The currency has also been subject to market fluctuations linked to Brexit news: in particular, weakening has been periodically observed whenever the risk of a no-deal Brexit seemed to become more concrete.
According to our model, this recent history of negative fluctuations penalizes the currency in terms of the exchange rate risk.

1. Germany is taken as an example for the whole Eurozone. As part of a monetary union, the exchange rate risk calculated by ExportPlanning is the same for all Eurozone countries.