Central Banks to the Rescue, Again

Monetary policy easing by the Federal Reserve accelerates: this week, the bank launched what analysts have called "unlimited QE". After announcing a plan to purchase $700 billion worth of securities last week, on March 23 the FED basically removed the quantitative constraint:

“The Federal Reserve will continue to purchase Treasury securities and agency mortgage-backed securities in the amounts needed to support smooth market functioning and effective transmission of monetary policy to broader financial conditions.”

This adds up the Trump administration's $2 trillion fiscal stimulus package, approved by the Senate on Wednesday and by the House of Representatives today. The combined effect of these measures consitutes a significant support for the US economy, in order to alleviate the economic effects of the Covid-19 pandemic, which has escalated in the US in recent days, bringing the States on top of the world ranking in terms of confirmed cases.

The European Central Bank has moved in a similar direction: on March 24, the ECB decreed that, under the Pandemic Emergency Purchase Programme, the self-imposed limits of "50% of the outstanding securities of an issuer which is an international organisation or a multilateral development bank" and 33% for other issuers shall not apply.
At the same time, EU countries are moving forward with their fiscal stimulus packages.

Major central banks’ and governments’ moves are therefore broadly in line with the course of action suggested by Mario Draghi, ECB former president, in an article in the Financial Times a few days ago. According to Draghi, in these exceptional circumstances, as in a war, the state should bear the costs of the crisis, through a structural increase in public debt. This path is considered as the least harmful, aiming to avoid business crises, as well as a consequent contraction of production capacity and tax base. Draghi suggests not only to support people who have lost their jobs, but above all to prevent them from losing them, by granting zero-cost liquidity to companies. The cost of this liquidity should not be borne by the financial system, but ultimately by the state.
It is therefore the state, in the vision of the former President of the ECB, which must bear the cost of the crisis in order to avoid irreversible damage to economies.

The strong support of monetary and fiscal policy is having an impact on stock exchanges and currencies. Wall Street breathed a sigh of relief this week, only to return into negative territory today, probably in relation to the news of the acceleration of the epidemic in the US, that has penalized investors’ sentiment.
The increase in the number of confirmed cases in the United States may also have contributed to the weakening of the dollar observed this week. However, the greenback has not only suffered a "Covid effect": in order to ease strains in global funding markets, new Federal Reserve measures have expanded the supply of US dollar liquidity to foreign central banks through existing currency swap lines. As a result, the strong demand for dollars seen in recent weeks has partially subsided, as has the anomalous currency appreciation trend. In the last week, the dollar lost 1.8% of its value in terms of effective exchange rate. 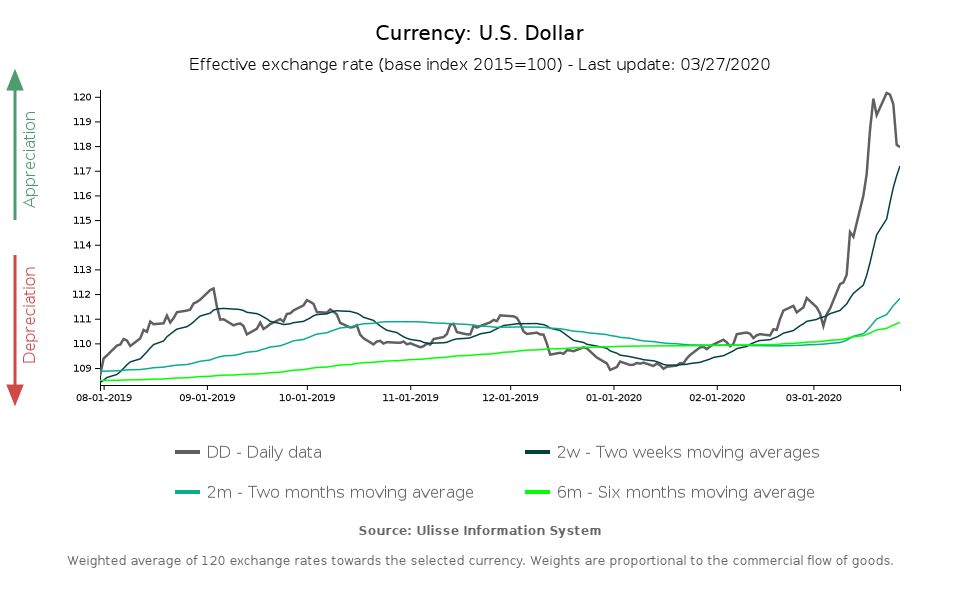 The strong appreciation trend shown by the dollar in recent weeks appears to be on hold, for the time being. Because of this setback, several emerging markets’ currencies - under pressure since the beginning of the health emergency - have gained ground against the dollar. Mexican peso strengthened by 4.6%, Chilean peso by 4%; Polish zloty strengthened by about 3%, as well as Colombian peso and Czech koruna. Indonesian rupee and Malaysian ringgit appreciation exceeded 2%; the Russian rouble strengthened by more than 1%.

The recovery of EM currencies can therefore be indirectly attributable to the monetary and fiscal support measures launched by major central banks and governments involved in the Covid emergency, which are calming the markets, reducing the flight from risk and the strong demand for dollars.
It is too early to say whether, financially speaking, we are at the beginning of a new phase of the pandemic, marked by a lower volatility. For the time being, stock exchanges and currencies are just breathing a sigh of relief; but this phase could undergo a sudden reversal, should the dynamics of the pandemic evolve unfavourably.