The theme of the week in FX discussion was the dynamics of the single currency which, thanks to the agreement reached on the Recovery Fund front earlier this week, celebrated with a significant leap against the dollar. As can be seen from the chart below, the euro-dollar exchange rate rose from 1.14 to 1.16 over the course of a week, a strengthening of about 1.8%. Considering the whole month of July, the single currency strengthened by 3.6% against the greenback.

Long-term data shown in the graph highlight that the EUR-USD exchange rate is on a two-year high, back to its late 2018 value. The euro is therefore benefiting from positive market sentiment and the consequent demand for EUR denominated assets, thanks to the Next Generation EU agreement, reached even earlier than expected. This agreement in fact represents a strong and cohesive response that will help the EU economy to recover from the effects of the pandemic.
According to some analysts, there would be further scope for strengthening for the single currency, if the pandemic continues to be contained and the recovery of the EU economy gains pace. The July flash PMI for the Eurozone, released today, bodes well for a recovery. The composite production PMI shows a value of 54.8, indicating a clear improvement from the previous month; this is the highest value in 25 months.

Positive signals come from Eastern European currencies, as well, which are in turn celebrating the agreement on the Next Generation EU plan. The graph below show the change in the effective exchange rates of some currencies in the CEE (Central and Eastern Europe) cluster, compared to their 6-month, 2-month and 2-week moving averages. 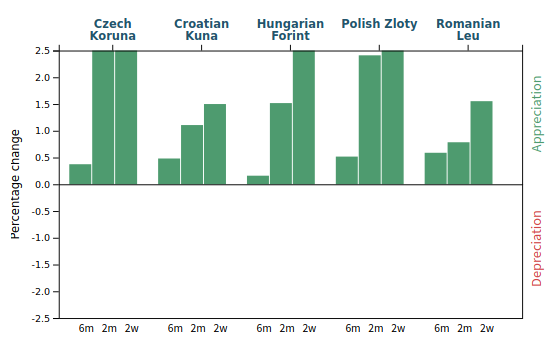 According to analysts, Eastern European currencies have also benefited, especially in the last week, from the risk-on sentiment linked to the Recovery Fund and the EU budget 2021-27, which also includes significant transfers for CEE countries. The increased chances of recovery of the EU economy linked to the agreement represent a positive factor for CEE economies, as well, since the Union is the largest export market for the CEE countries considered in the graph: according to ExportPlanning data, 75% of exports of goods from the area were directed, in 2019, to the Union.

On the other side of the ocean, the dollar confirms its trend of weakness. In the face of a decreasing safe-haven appeal, thanks to signs of improvement in the global economic situation, the dollar lost almost 5% of its value in terms of effective exchange rate from late March highs. The epidemic is still putting a lot of pressure on the economic recovery and the currency. Approximately since the beginning of July, the US epidemic is in fact going through a new phase of acceleration: these days, new confirmed cases in the US are around the order of 70,000 per day.

World trade Figures: the performance of major importers in 2020

Opportunities and Accessibility for the Agricultural Machinery Sector: Focus on Mexico and Vietnam Markets