Lockdown and Foreign Trade: a Focus on Competitiveness

In the second quarter of 2020, while the health crisis was heavily weighing on the international scenario, Italian exports contracted by 28.8% in EUR, according to our estimates, compared to a 21.6% overall reduction in terms of world trade. This fall, deeper compared to one experienced by the general world trade dynamics, reflects a reduction in the Italian global market share, as documented in the graph below: in particular, between Q1 and Q2-2020, it is estimated that Italy's market share fell from 3.27% to 3.07%.

As can be seen from the graph, in Q1-2020 the effects of the pandemic - that had just begun - in terms of reduction in market shares are yet to be felt: the loss of market share compared to the previous quarter was in fact limited to 0.02%. The stop to non-essential production activities, made necessary to counter the spread of the epidemic, extended to the national territory from the end of March to the beginning of May, represented a game changer, drastically reducing the competitiveness of Italian companies in the international arena. However, this reduction in the Italian market share, in addition to a pure competitiveness effect, could be due to structural factors.

First, it could depend on the nature of the market portfolio held by Italian companies, which could turn out to be unfavourable in this context, compared to the one held by its competitors: as documented in the article "World Trade: Covid-19 effect on International Trade Areas ", the dynamics of world demand in the second quarter of 2020 was relatively differentiated between the different areas of the world. Competitors with high market shares in Asian countries were favoured, given the greater resilience of demand in that area, compared to companies, such as the Italian ones, which have larger market shares in European markets.
Secondly, the reduction in quotas at the aggregate level could be due to the composition of exports by product. In the recent article "Large changes in the world demand structure", it has been pointed out that world trade, in the current phase of crisis, is presenting very different dynamics by sector, favouring countries that export health and food products, while penalizing, instead, countries that are more specialized in the production of means of transport and machinery.

We therefore used the Constant Market Share Analysis (CMSA) technique to break down the effects of the different factors on the dynamics of the world trade share held by Italian exports and their main competitors countries.
CMSA is a statistical method that breaks down the variation in a country's market share between two successive periods with respect to its main determinants, labelled in the economic literature as competitiveness effect and structural effects. Among structural effects, we here mainly take into account the product effect and the regional effect. The former has a positive impact on the change in market share if world demand grows more for products for which the exporting country holds larger market shares; the latter has a positive impact if the markets in which the exporter has larger market shares grow more than the others in terms of demand.

The following graph shows the CMS analysis for Italy. 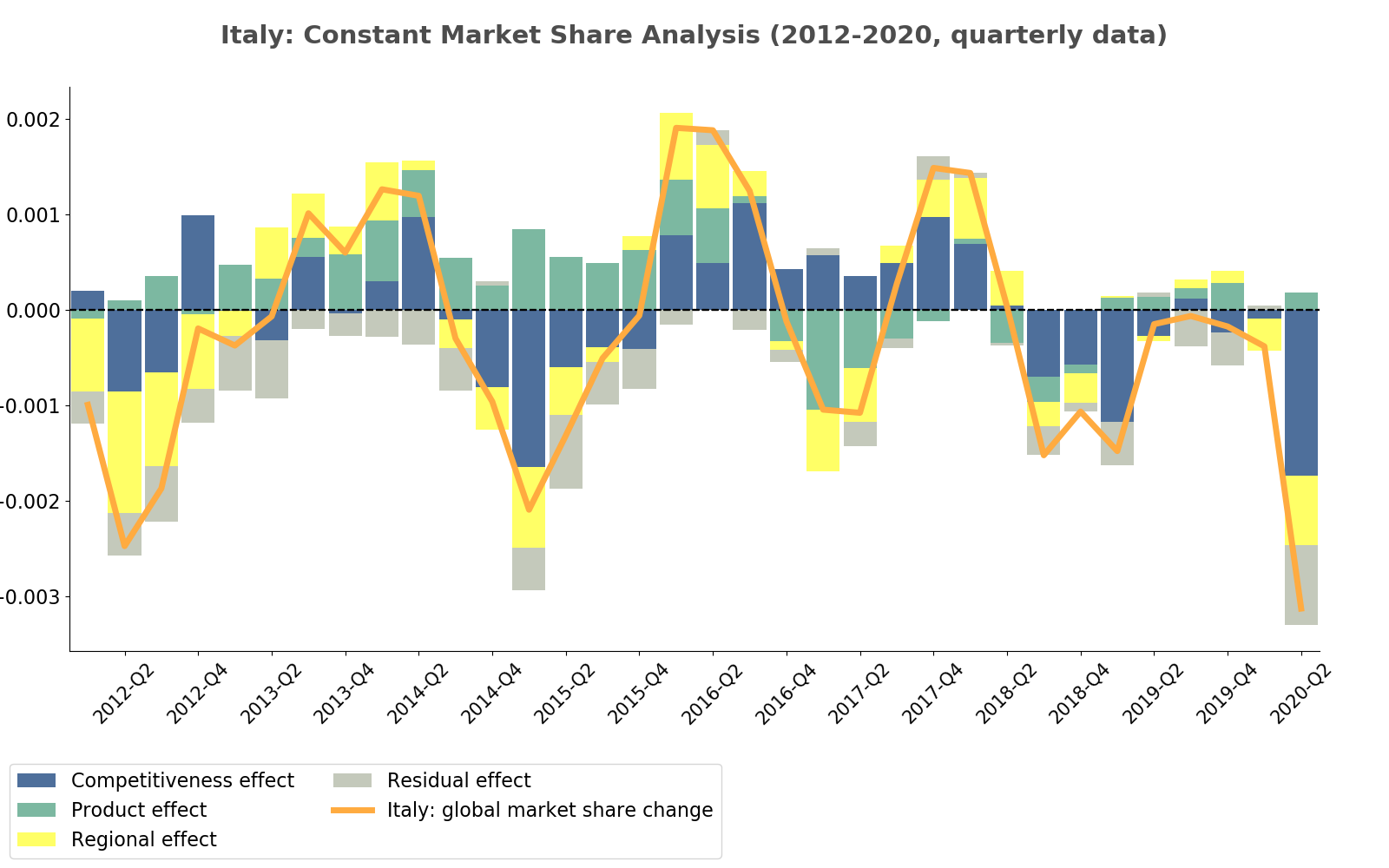 The negative effect of the geographical structure of Italian exports and the competitiveness effect, reflecting the closure of non-essential activities, is evident. In fact, Italian exports in the second quarter were mainly directed towards markets that significantly reduced their demand: first of all Germany (-25% YoY), followed by the United States (-20.6%) and France (-32%). On the other hand, thanks to exports of pharmaceuticals and agri-foodstuffs, the product effect proves to be positive, offsetting to a small extent the reduction in quotas caused by the joint action of the other two factors. In particular, the macro-sector of Healthcare Products is the only one in Italy to have recorded a significant year-over-year increase in exports in the second quarter, with a 4% increase in EUR. Within the agri-food sector, on the other hand, increases in national exports are estimated for Rice, pasta and flour (+21.4% in Q2-2020 YoY), Pet food (+20.9%), Oil, condiments and spices (+7.8%), Vegetables and legumes (+3%).

In the following graph the same analysis is reported for China. In this case, all the components of the change in market share are, instead, strongly positive: overall the country gained, in the second quarter of 2020, more than 4 percentage points in terms of market share. 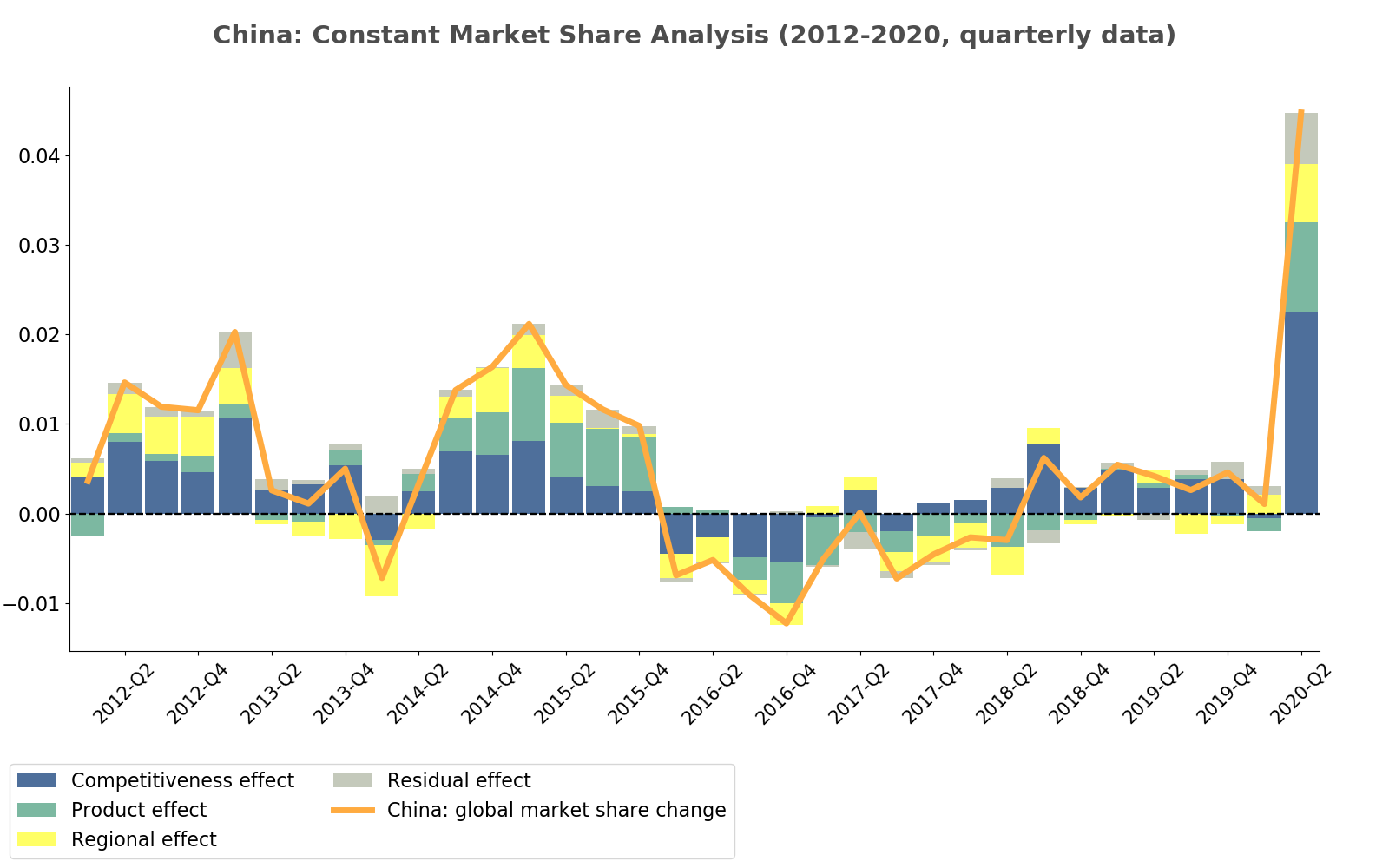 It is clear that the situation in China, which was already starting to emerge from the Covid crisis in Q2, is very different from that in Italy and many other countries that found themselves facing the hardest phase of the lockdown during spring. In the face of a reduced export capacity from other countries, whose production activities were blocked by the lockdown, China was able to gain in terms of market share in the second quarter.

To conclude, the following graph shows the competitiveness effect calculated for the 10 largest European exporters in the second quarter of 2020.

As can be seen from the graph, the biggest drop in terms of competitiveness effect is recorded for France, followed by Great Britain, Spain and Italy. Among the major European exporters, these countries have adopted severe restrictions on production activities during the lockdown phase; restrictions on economic activities have been relatively less severe for countries such as Germany, the Czech Republic and Poland, which actually show smaller contractions (or, in the case of Poland, even an increase) in terms of competitiveness effect1.
It should however be pointed out that restrictions on productive activities are only one of the factors that contribute to explain a country's competitive performance, a multidimensional and complex concept, all the more so in circumstances out of the ordinary as the current health crisis.

This analysis tries to provide an initial explanation of the changes in the balance of power in international markets in the quarter second of 2020, but it would not be correct to infer whether or not it was appropriate to have implemented restrictive lockdowns, a choice based on the severity of the epidemic at the country level, as well as political preferences.
The evolution of world trade quotas in the coming months could help express such a judgement: a health situation hopefully under control at a national level will allow companies to express their full competitive potential, compared to companies in countries such as the United States and Brazil, where a less decisive management of the health emergency is forcing economic operators to act for a longer period of time in a context of emergency and uncertainty. This could have relatively limited effects in the short term, but a potentially long-lasting impact.