A weakening consensus to the Thai regime

The prospect of a violent response to youth protests in Thailand weighs on the baht.

After closing 2019 with a value of less than 30 baht per dollar, since the beginning of 2020 the Thai currency has started a different path compared to the one recorded in the previous three years. Between the beginning of 2016 and the end of 2019, it strengthened from 36 to 30 Baht per dollar, so much so that it became a possible safe-haven currency (see the article "Baht's Paradise"). During the current year, however, the Baht has experienced a depreciation trend originating from different factors. 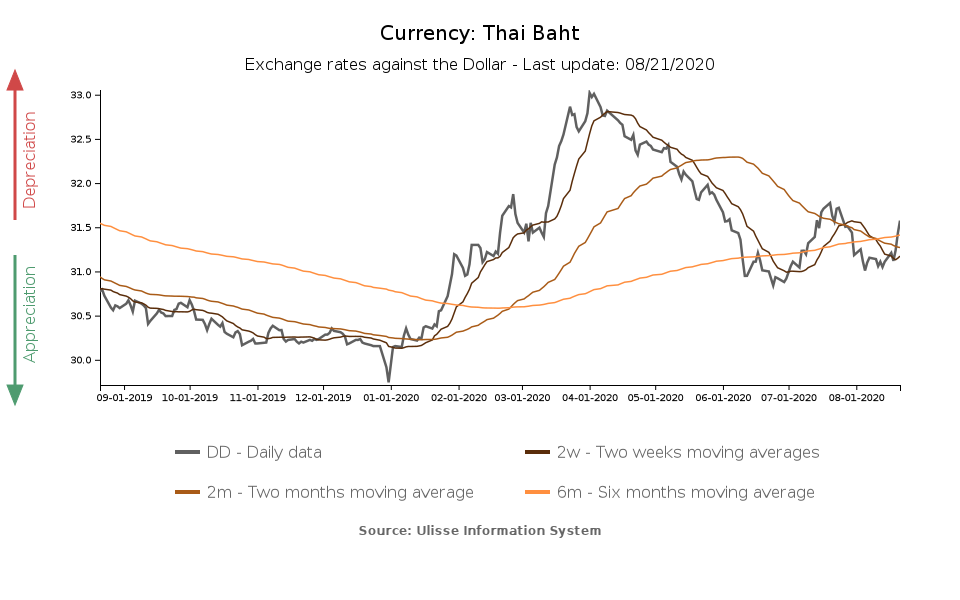 In January 2020, the outbreak of the Covid-19 epidemic in China and the blockade of Chinese tourism led to fears of a collapse in Thailand's tourism revenues in 2020. At the end of January, Thailand's Tourism Authority estimated a possible reduction from 11 to 9 million Chinese tourists during 2020. As a result of this forecast, the Baht exchange rate fell from 30 to 33 baht per dollar in two months. The Thai government's effective response to the pandemic subsequently restored confidence in a rapid tourism recovery, once the Covid-19 emergency was over. Already in early May, Thailand had managed to reduce the number of new daily cases below ten, with only four deaths in the four months between May and August. At the same time, foreign exchange reserves, after falling slightly between January and March, started to increase again and reached a new record of $233 billion in June 2020. The exchange rate benefited from this situation, until it fell below 31 baht per dollar at the end of June.

The factor that is currently weighing on the baht is the youth protest that is leading more and more people to demand the dissolution of parliament (so as to organize new elections), amendments to the constitution and an investigation into the cases of kidnapping and killing of Thai dissidents outside the kingdom. Demonstrations began in mid-July and have grown to become the largest protests since the coup that took place six years ago, with some ten thousand protesters gathered around Bangkok's Democracy Monument. Now protests and criticisms also concern the king, challenging Thailand's strict laws on lese majesty. So far, the government and the palace have shown no sign of listening to the demands of the protesters. It is unlikely that the government, or even the king, will give in to the demands. Given Thailand's history, the strong opinions of Thai monarchists and the power of the military, the prospect of violence in Bangkok is therefore very concrete.
In the face of these dangers, the Thai currency was back above 31.5 baht per dollar this week.

New Twist in Turkey (and Tailwind for Safe Haven Currencies)

Once again this week, Turkey takes center stage in the currency scene. Broadening our view, strong currencies capture the attention of analysts as well as investors' preferences. [ Read all ]