Financial markets reward the consolidation of the Chinese recovery

The strengthening of the Chinese yuan, that we reported in a September article ("The Ascent of the Yuan: a Change of Strategy?"), keeps going. Looking at the exchange rate against the dollar, which has been strengthening since early summer, we can see that it is now back to mid-2018 levels. Today, the exchange rate closed at 6.58 yuan per dollar, a slight decline from last week's 6.56 yuan per dollar. 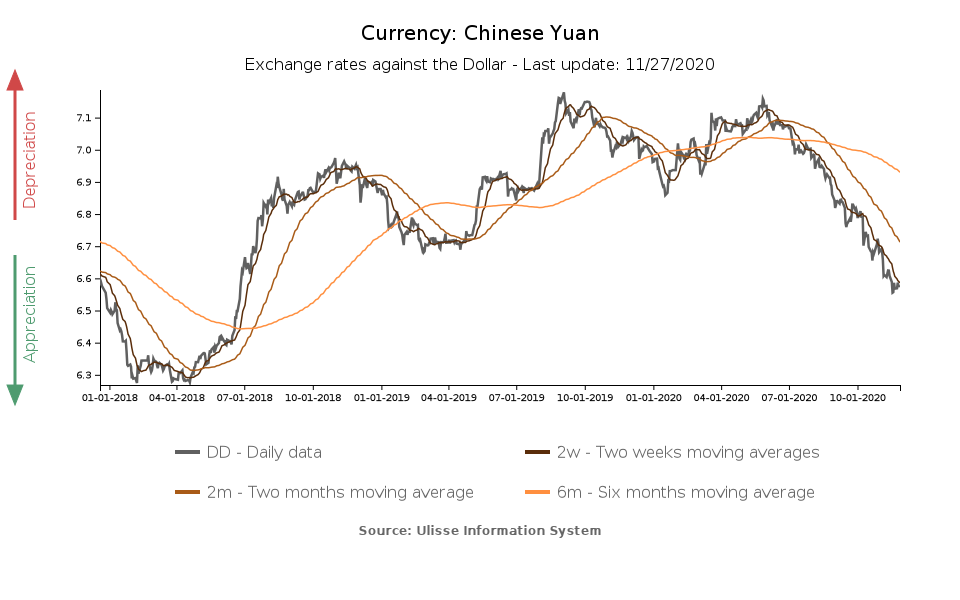 The factors identified in September continue to support the dynamics of the Asian currency: in fact, the Chinese economic recovery is consolidating, unlike other major economies which are now struggling with the new wave of Covid-19 infections; the weakness of the greenback is also confirmed.

Economic recovery. In the eyes of investors, China is proving particularly attractive for the recovery of economic activity and growth levels, while the West is still struggling with Covid-19.
One of the main factors driving the Asian country's recovery is foreign trade: data from the National Bureau of Statistics of China show that, in the first 10 months of 2020, Chinese exports grew by 2.4% YoY. In October, China's exports marked a remarkable +7.6% compared to October 2019.
The domestic market has also consolidated the recovery trend already noticed in the previous months: retail sales of consumer goods increased in October by 4.3% YoY, with a positive YoY variations since August. Even more solid is the rebound of the industrial production, which has shown positive YoY variations since April (+6.9% in October) and accumulates, for the first 10 months of the year, a 1.8% growth rate compared to the same period of the previous year.
Looking at macroeconomic data, China's GDP shows a YoY growth of 4.9% in Q3, bringing overall economic growth in the first three quarters to positive territory (+0.7% YoY). The West, on the other hand, continues to falter: the European Union's GDP fell by 4.3% in Q3-2020 YoY (source: Eurostat), while a lower fall of 2.9% was recorded for the United States, according to the last estimates of the U.S. Bureau of Economic Analysis.

Financial markets' enthusiasm. The figures for the third quarter therefore seem, for the moment, to confirm the direction indicated by the International Monetary Fund in its October scenario: China will likely be the only one among the major economies to record a positive GDP growth rate already in the current year. These prospects, brighter than those faced by most countries, are therefore inevitably influencing investors' enthusiasm for the Asian Dragon, and thus indirectly supporting the yuan. In the same direction go the expectations of more relaxed trade relations with the United States during the Biden administration, as well as the higher yields offered by Chinese securities compared, for example, to the American counterparts.
Financial markets' mood has also been particularly euphoric in recent weeks, thanks to several announcements of potential vaccines against Covid-19 (Pfizer, Moderna, AstraZeneca-Oxford), thus supporting risk aversion. This mood has touched stock markets as well as the price of oil that, after an uncertain autumn, has recorded an increase of more than 15% in the last two weeks, supported by the hope that the return to normality linked to the distribution of vaccines may bring, in the medium term, the demand for oil back to pre-pandemic levels.

Weakness of the dollar. Lastly, let us not forget that the bilateral yuan-dollar exchange rate inevitably benefits from a dollar that continues to be weak: the greenback's exchange rate against the euro is, in fact, once again approaching the threshold of 1.20, as it happened in early September.

Car registrations have been diminishing for the fifth consecutive month in the EU market: in November, they decreased by 20.5% compared to 2020 [ Read all ]