The Trump Administration's Latest Move on Trade and FX Policy

Switzerland and Vietnam have been labelled as "currency manipulators"

This week saw the release of the US Treasury Department's report on the "Macroeconomic and Foreign Exchange Policies of Major Trading Partners of the United States". Under a 1988 law, the US Treasury Secretary is required to submit semi-annual reports to Congress on the subject; the latest edition of the report led to the designation of Vietnam and Switzerland as "currency manipulators". So let us explore the meaning and implications of this label.

Key criteria. The concept of currency manipulator requires that the country in question, through persistent interventions in the forex market, may have limited the appreciation of its currency against the dollar during the period under review (in this case June 2019 to June 2020), in order to "prevent effective balance of payments adjustments or gain an unfair competitive advantage in terms of international trade."
Under the requirements adopted by the US Treasury, a country may be designated as a currency manipulator if, during the relevant period:

As you can see from the charts below, the two countries fall well within the criteria indicated.

Trade. Specifically on the trade front, historical data available on ExportPlanning also confirm a gradual deterioration in the US bilateral deficit with these countries in recent years, exacerbated in the latest quarters by the Covid crisis.

Exchange rates. Looking instead at exchange rates, we can see that the franc appreciated by 4.9% against the dollar between the beginning of June 2019 and early June 2020; in particular, we note a strengthening starting in late 2019.
On the other hand the Vietnamese currency, the dong, recorded an overall appreciation of less than 1% over the same period, thanks to the recovery started after the sharp spring weakening, during the most acute phase of the health emergency. Overall, compared to June 2019, the dong is therefore only slightly stronger in June 2020. 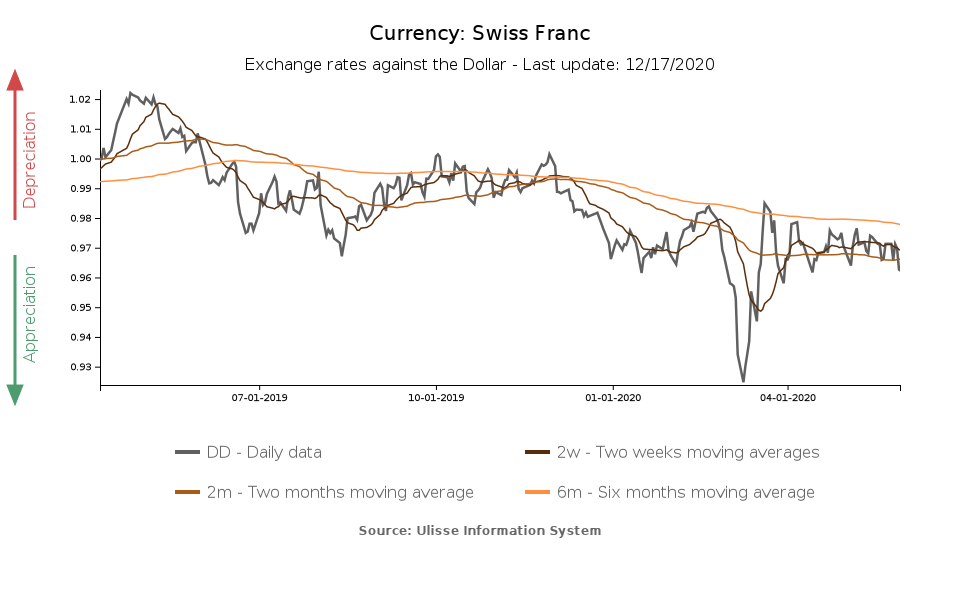 Reactions. In the face of appreciations towards the dollar deemed insufficient, the fear of the American administration is therefore the potential competitive advantage of the countries in question on international markets, which would in turn make American goods less competitive.
The two countries accused of seeking illegitimate advantages have obviously rejected the allegations. The Swiss National Bank (SNB) has stated that interventions in the forex markets are necessary for price stability, in relation to the safe-haven role of the franc and the risk of disinflation. In fact, in its latest monetary policy report released on Thursday, the SNB said that it will not change its expansionary monetary policy approach, but will leave the benchmark rate at -0.75%, while also remaining intent on intervening significantly in forex markets.
The State Bank of Vietnam (SBV), on the other hand, said its monetary policy strategy is tied to the peculiarities of the country's economy, and is aimed at macroeconomic stabilization and inflation control.

Consequences. At this point, the next step after the designation of currency manipulators is the start of bilateral confrontations between the authorities of the respective countries. In the absence of an agreement, the greatest risk is that of sanctions or other penalties by the US against the designated countries.
The important element of discontinuity that will be introduced from January, however, is the change at the top of the US administration. The position of the Biden administration on the question of currency manipulation could therefore be a first test to evaluate the possibility of a change in the US approach to trade policy and international relations.