The exchange rate of the Thai baht has returned to pre-Covid levels, back to early 2020 values. The currency closes the week at 30.51 baht per dollar: the peak of maximum weakening of over 33 baht per dollar, touched at the height of the Covid shock, therefore seems far. 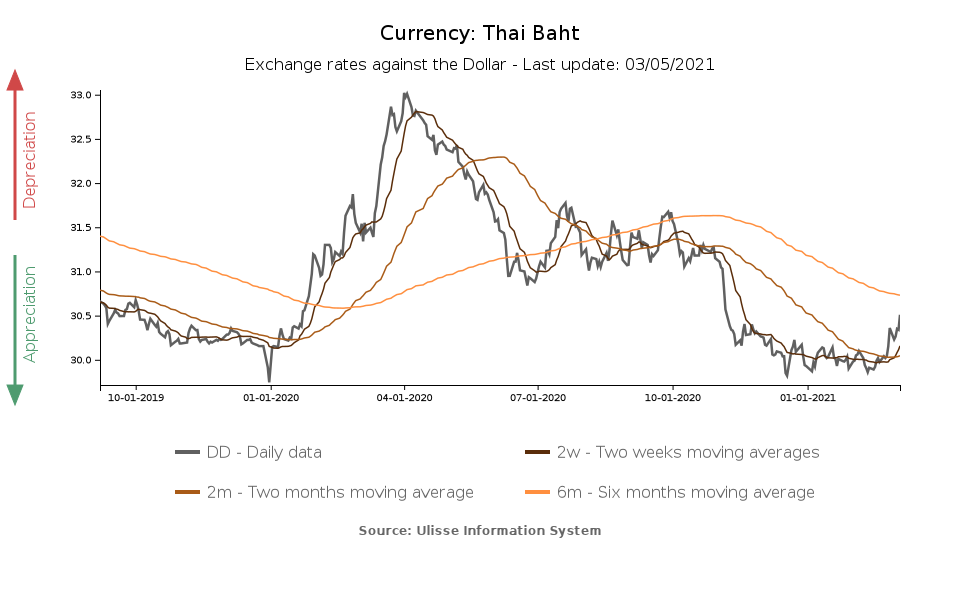 How is the recovery of the Thai economy progressing? Does the return of the exchange rate to sustained levels reflect a significant economic rebound? The answer that emerges by analyzing some key data is, for the moment, negative.
The latest information released by the country's authorities (Office of the National Economic and Social Development Council) report a lower-than-expected, but nonetheless deep, fourth quarter GDP contraction (-4.2% YoY). While the V-shaped recovery is underway, as can be seen in the chart below, the economy is currently still below pre-crisis levels. For the whole of 2020, the country's GDP fell by 6.1%, the deepest contraction since the -7.6% recorded in '98, during Asian financial crisis. 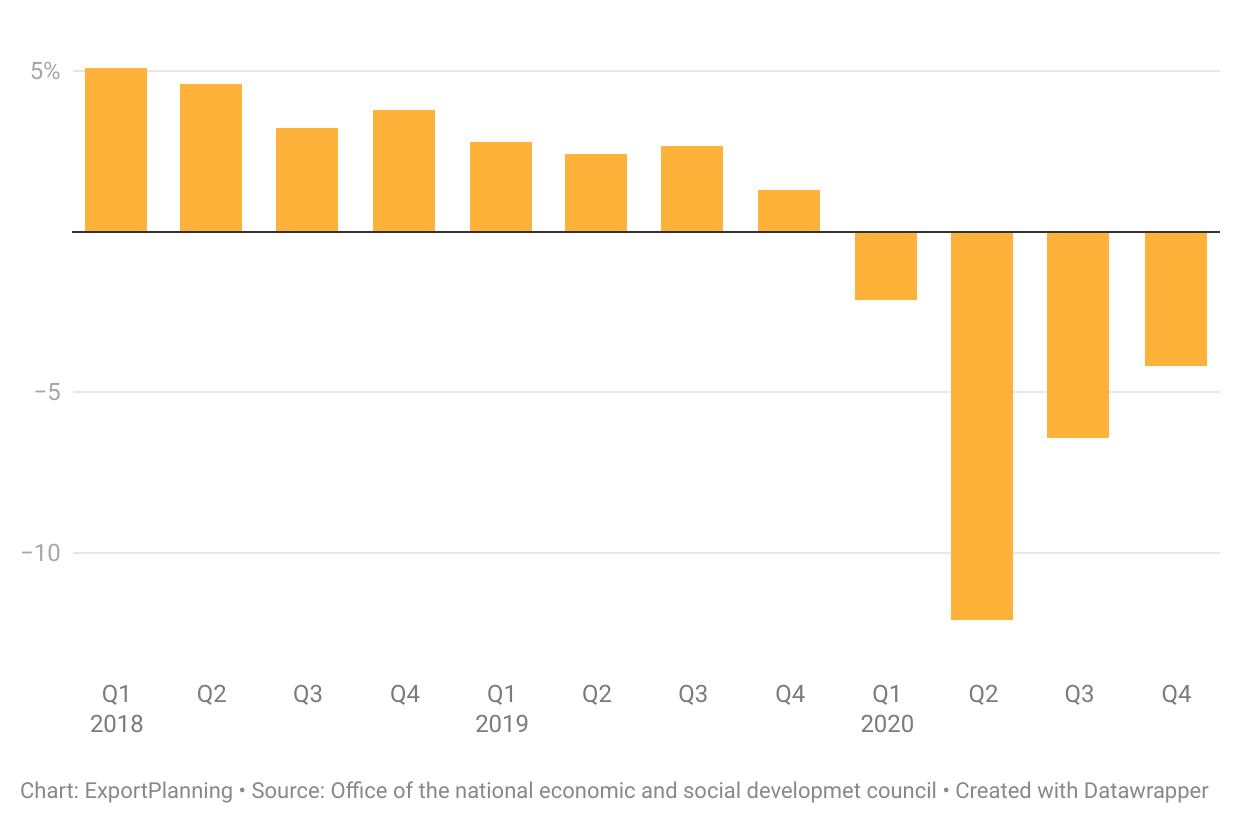 Around the world, the impact of the pandemic has strongly exerted its economic effects by crippling the services sector; in the case of Thailand, this emerges very clearly in relation to the strong role of the tourism industry in the country. For Thailand, tourism revenues are a structurally important component of GDP: in 2019 they exceeded 11.3%. Thailand's Ministry of Tourism and Sports estimated that, in the year of the great pandemic, tourist arrivals in the country fell by 83% compared to the previous year - from nearly 40 million tourists in 2019 to 6.7 million in 2020.
Against a backdrop of stalled tourism, the current account balance was affected: although the goods balance remained in positive territory - indeed even increased - during 2020, due to a drop in imports (-13.5% year-on-year) that more than offset that of exports (-6.6%), the balance of services and primary/secondary income entered sharply into negative territory, as shown in the chart below. The overall effect on the current account balance was a fall of more than 50% compared to the previous year. 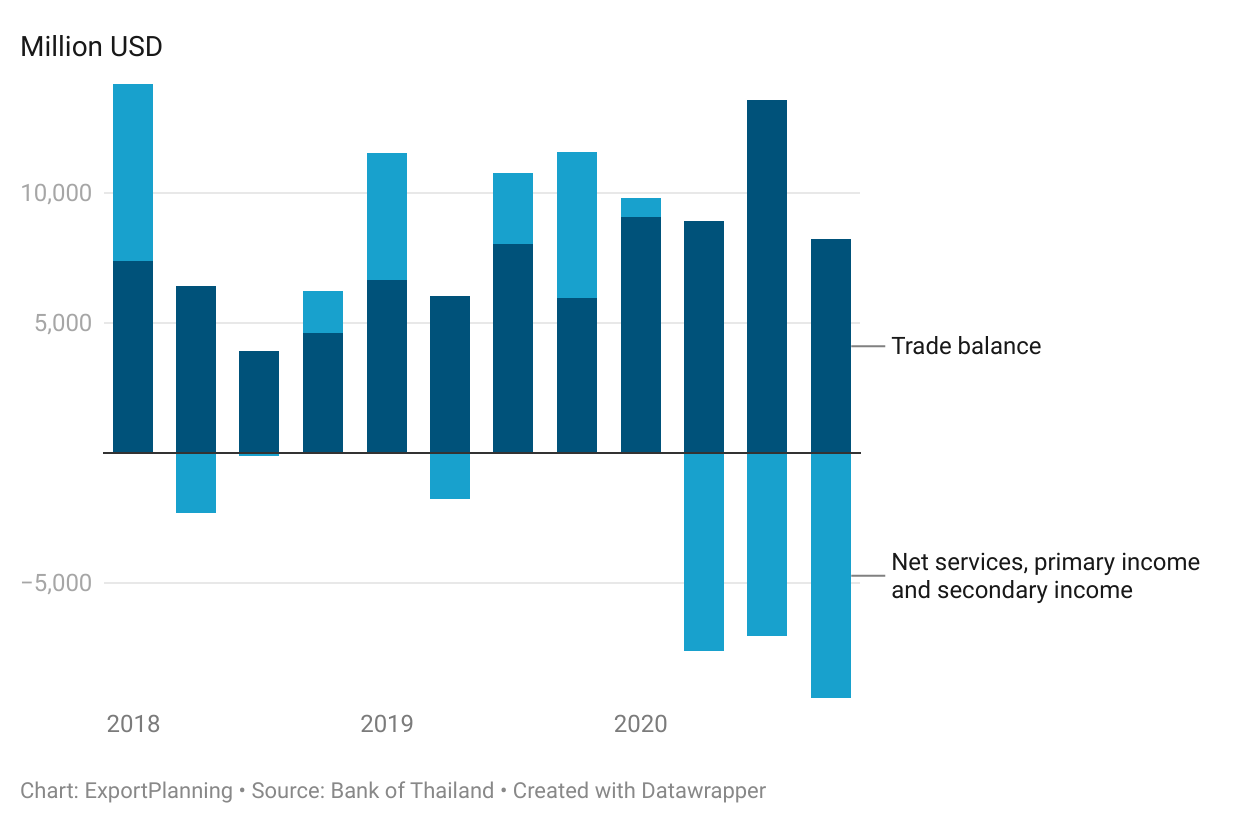 Although the fall in the current account balance in 2020 dented a historic source of support for the currency, the baht exchange rate has been relatively resilient. A phase of stability between summer and autumn was followed by a new phase of strengthening against the dollar in the last months of 2020. 2021 opened under the banner of stability, with some signs of weakening starting in February.
The currency has certainly benefited from the general phase of market appetite for risk, although the willingness of the central bank to avoid excessive appreciation - so as not to undermine the competitiveness of exports and tourism - is always present.

According to recent statements by the Bank of Thailand, the outlook for the country's economic recovery remains largely uncertain: it is linked, in the short term, to the second wave of Covid-19 infections, which has affected Thailand since late December but seems to be now under control. On a broader horizon, the recovery is dependent on the return of tourists (as reported by Swissinfo.ch, the Thai Prime Minister has commissioned a study on the so-called "vaccination passports" for international tourists, to encourage the resumption of tourism), the effectiveness of the vaccination campaign (just started) and the continuation of fiscal support by the government.