EU exports continue to recover, especially for Central and Eastern Europe, although slowing slightly in early 2021

The latest update of the foreign trade statistics of European countries offers a more robust estimate of the growth that characterised the old continent in the first quarter of 2021.
Europe as a whole was one of the geographic areas most affected by the pandemic crisis and since the second quarter of 2020 has been characterised by export dynamics below the global average.
As shown in the graph below, after the strong rebound in Q4-2020, the relative stability in Q1-2021 prevented EU exports from reaching pre-pandemic trade levels. 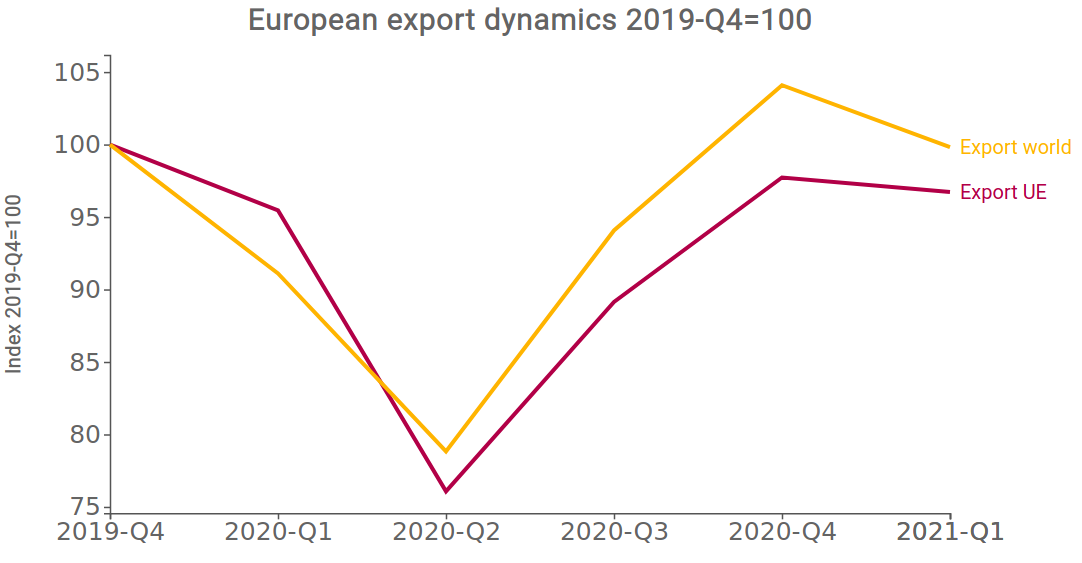 In the analysis of exports, the destination market is often of particular importance.
The graph below shows the quarterly trend change (compared to the corresponding quarter of the previous year) of European exports in euros, distinguishing between Intra-EU, Extra-EU and Total exports. 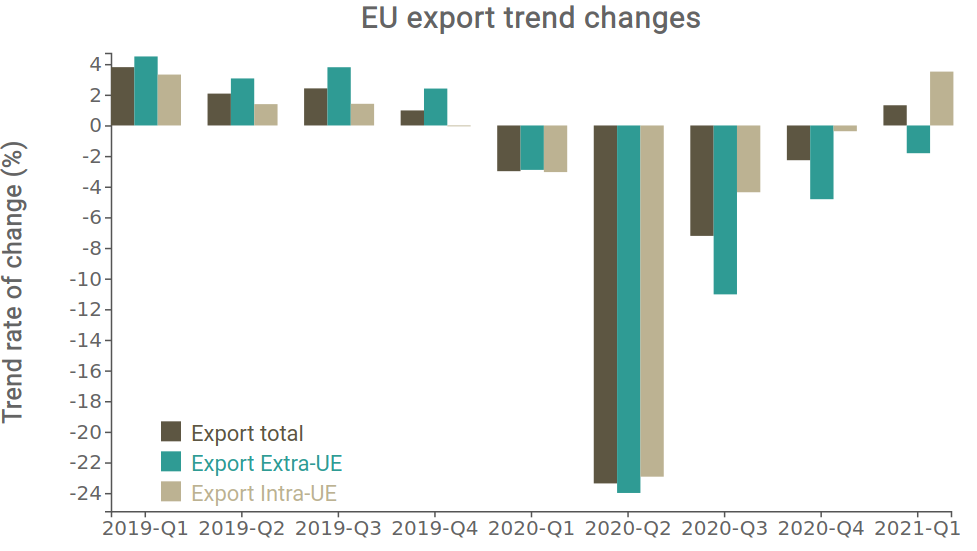 The graph shows that in recent months there has been a substantial difference between Intra-EU and Extra-EU exports. The former recorded a slightly negative change in Q4-2020 (-0.4%), while in Q1-2021 they exceeded the pre-pandemic levels of early 2020, with +3.5% on a trend basis. The latter are still negative, reaching -1.8% in the first months of 2021.

This phenomenon is due to the effects of the SARS-CoV-2 outbreak, as despite the dramatic increase in the availability of vaccines and the many expansionary monetary policies implemented by countries, travel is still impaired and consequently exports to more distant geographical areas have suffered more.

Over the last 12 months, the dynamics of EU exports have been very heterogeneous, mainly due to the different degree of spread of the virus and the different results of the vaccination campaigns in the member countries.

The map below positions the countries according to the annual rate of change in 2020 (X-axis) and the rate of change of the first quarter of 2021 on the corresponding quarter of 2019 (Y-axis); the width of each ball is proportional to the value of exports in 2019.

Firstly, we can see that all European countries are positioned above the bisector, reflecting the growth that has characterised the entire continent in recent months.
Among the two types of clusters highlighted, the countries of Central and Eastern Europe stand out, most of which occupy the top right-hand side of the graph, or rather those characterised by superior resilience during the economic crisis and a greater ability to quickly recover pre-pandemic export levels.
Poland and Latvia in particular, but also Estonia and Slovenia stood out for greater resilience and faster recovery to pre-crisis levels. Conversely, most of Europe's largest economies in the first quarter of 2021 still recorded export levels significantly lower than in the corresponding period of 2019. Germany, by far the continent's leading exporter, with a level that had exceeded 1,300 billion euros in 2019, is the emblem of a Western Europe that is struggling to return to pre-Covid-19 standards.

In contrast to the substantial recovery in the last half of the year, the analysis of EU exports shows a rather heterogeneous export recovery situation, in which the countries of Central and Eastern Europe excel. For the immediate future, it will be important for all member states to take full advantage of the European funds allocated with the Recovery Fund, also to increase their export capacity to non-EU areas currently experiencing a strong recovery, such as South-East Asia.