From safe-haven currency to currency at risk

A new Bath depreciation phase has been going on for over a month. In recent days, the exchange rate of the Thai currency has exceeded 32 baht per dollar. This is undermining the image of strong currency that the baht gained in the past years: between the beginning of 2016 and the end of 2019, the Thai currency had appreciated from 36 to 30 baht per dollar so that it was about to become a safe-haven refuge currency (see The Baht's Paradise). The change taking place in the financial markets' assessment of the potential of the Thai economy is therefore clear. 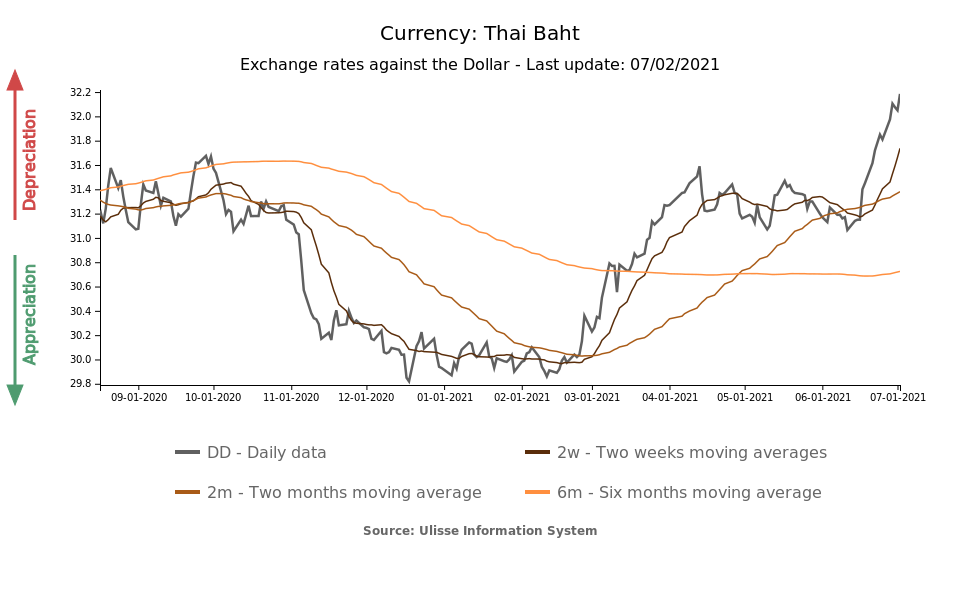 Failure to manage the pandemic without full-scale vaccinations

The reasons of these weakening phases are to be found in the increasing vulnerability that Thailand is showing towards the Covid-19 epidemic. While the Asian country had managed, through containment measures and intensive contact tracing, to remain free of infection during 2020 with a cumulative number of cases at the end of the year of less than 10,000, the country's ability to contain the contagion without resorting to vaccines has been drastically reduced since April, up to exceed 250,000 total cases.

The government took action and in April began a vaccination campaign that began slowly. Only since June has it registered a significant boost. Today, however, only 10% of the population has received at least one dose of vaccine. This percentage drops 4% if we account for the percentage of people vaccinated even with the second dose. The government has concentrated vaccinations in the most touristic areas with the intention of reopening them as soon as possible. On July 1st, the island of Phuket was reopened. Now travelers vaccinated and in possession of a negative test for Covid-19 can visit Phuket without the need to undergo any quarantine. The government's plan is to have Thailand fully reopened to international visitors by early 2022.

Only in 2023 will GDP return to pre-pandemic levels

This situation severely harms the recovery of the tourism sector, one of the country's main development factors and main source of foreign exchange. Recently, the Monetary Policy Committee of Thailand's central bank revised GDP growth downward to 1.8% and 3.9% for 2021 and 2022. Considering that Thailand's GDP slump in 2020 was 6.1%, it seems that Thailand will only be able to recover to pre-pandemic activity levels in 2023, lagging far behind many other emerging economies.

As Bath depreciates, the dollar strengthens, supported by FED's optimism on American recovery. Like many other emerging economies, U.S. rate hikes would force the Thai central bank to do the same to counter capital outflows. While a U.S. hike would be countered by the strength of the U.S. economy, Thailand's rate hike would bring about a further weakening of the economy.

Finally, another factor that is damaging the economy is the crisis of democratic institutions following the 2014 military coup. The contested 2019 elections did not change the situation, as General Prayut Chan-o-cha became prime minister again. Popular dissent against the government, which was very strong in 2020, slowed down in 2021 due to Covid restrictions, though it keeps spreading on social media. On June 24, there was a new demonstration in Bangkok with a few thousand people to ask for a reform of 2017 constitution, sought by the military, and the resignation of Prime Minister Prayuth Chan-ocha.
Without democratic institution-building, it is difficult for Thailand to fulfill its full potential.