The effects of the dollar bull trend on emerging currencies

On currency markets, the summer of 2021 opened with a clear reversal of the dynamics observed in the first months of this year: the catalyst event for this change of course was certainly the last Federal Open Market Committee (FOMC) of the FED held in June. Expectations of a recovery in the US economy, as well as the FED's declaration that it is ready to anticipate the bond selling phase (tapering), contribute to the relatively positive sentiment of international observers towards the greenback. In addition, the spread of the third wave of Covid-19 that has entered into full swing in several countries around the world, with strong accelerations in the number of new daily contagions, are making investors more risk-averse, to the detriment of emerging currencies.
The chart below shows the percentage changes in the exchange rate against the dollar of the main emerging currencies that we analyzed from the beginning of the year until Friday, July 16, using the day of the FED announcement (June 16) as the "watershed time". In this way it is possible to distinguish the currencies that are following a long-term dynamic from those that have reversed in the last month. 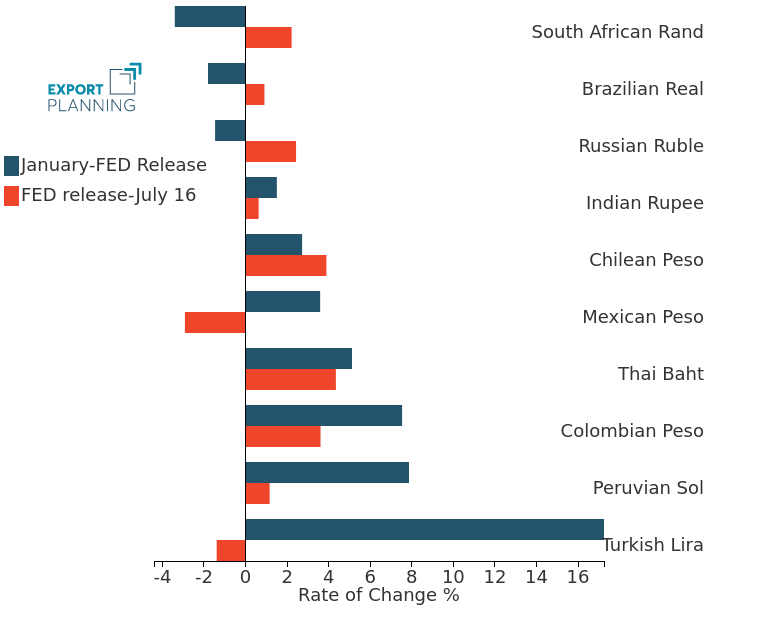 Notwithstanding the Thialandese Bath, Colombian Pesos, Nuevo Sol, Chilean Pesos and Indian Rupee exhibiting long-term weakening dynamics against the dollar, some currencies show a clear change of direction.
In fact, for the South African Rand, the Brazilian Real and the Russian Ruble - i.e., the best performing currencies of the emerging cluster in the period prior to the FED announcement -, a sharp depreciation is reported in the last month. In contrast, the Mexican Pesos and the Turkish Lira are experiencing a surprising phase of appreciation against the dollar.

The case of the South African Rand 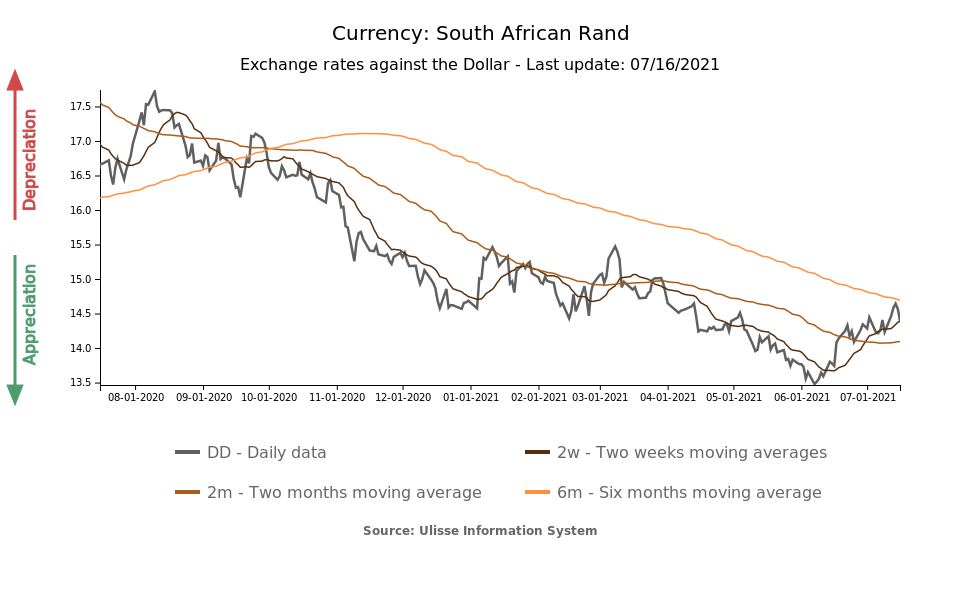 As you can see from the chart here, and as recounted in a previous article, after the depreciation caused by the Covid-19 crisis, the rand exchange rate against the dollar showed a strong recovery in the post-Covid period, reaching below the 14 rand per dollar threshold in early June.

In recent weeks, the prolonged phase of appreciation of the South African rand seems to have halted: in the last month, the currency has lost 4.7% of its value against the dollar, ending the financial week with a depreciation of 1.1%.

However, in addition to the bull trend of the dollar, there are other factors that are driving the reversal of rand exchange rate dynamics and concern, not unlike the Colombia case, both the recent developments in the Covid-19 pandemic and the uprisings in the Country.

In recent days, in fact, South Africa is facing what can probably be called the most serious crisis in the country since the end of apartheid, 25 years ago. The fuse of the revolt was sparked by the imprisonment of former President Jacob Zuma, sentenced to 15 months in prison for contempt of court, after refusing to cooperate in an investigation into corruption during his term of office. Incidents of violence centered in Johannesburg over the past weekend have already left 72 people dead and several thousand injured.

In addition, South Africa is grappling with a surge in cases, linked to the spread of the Delta variant, which, as reported on several occasions, is particularly contagious and resistant to the first dose of vaccine.

In July, more than 20 thousand new cases have been registered and, in this context, the Government has decided to extend the measures to contain the epidemic for another 14 days. To aggravate this situation, following the escalation of violence in the country, the vaccination campaign has been temporarily suspended. The problem is mainly related to the difficulty of transporting drugs to hospitals, being severely hampered transport between the economic capital Johannesburg and the east of the country.According to reports from the site Our World in Data, the vaccination campaign in the country was already proceeding slowly with less than 7% of the population who have been administered the first dose of vaccine.

As has been mentioned several times, the last meeting of the Federal Reserve brought a new wind to financial markets, causing a change in the exchange rate dynamics of the greenback and several emergi}... [ Read all ]