In line with a scenario of general distress for emerging currencies in Latin America, in this week's in-depth currency analysis we focus on the case of the Colombian Peso. As the chart shows, during 2020 the Colombian currency faced the financial, economic and social consequences dictated by the shock of the health crisis, reacting with an initial depreciation, followed by a recovery at the end of 2020. However, after the rebound at the end of the year, the Colombian peso inaugurated 2021 with a new phase of weakening, recording a depreciation against the dollar of 12.2% between January and July. 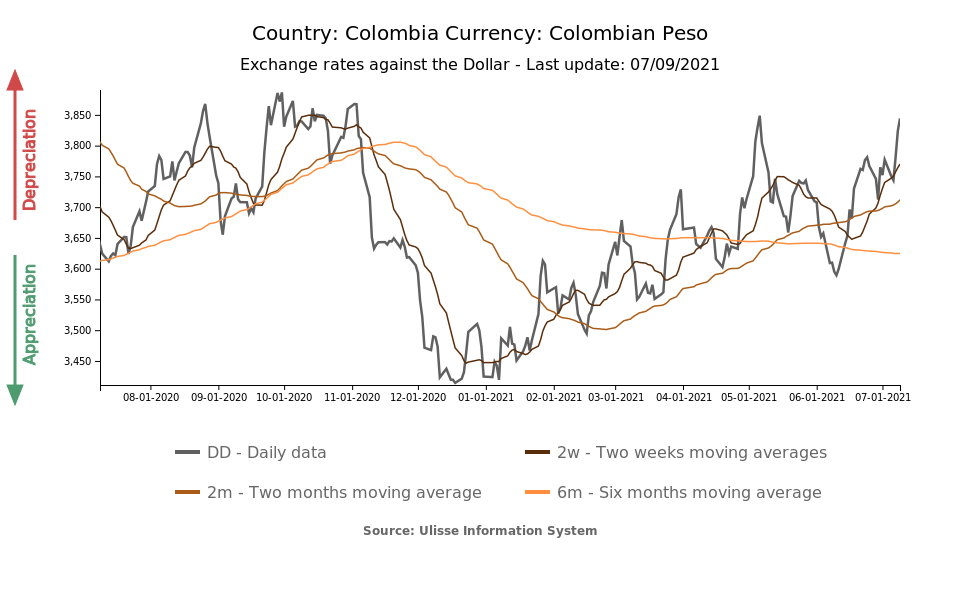 go to the Exchange Rates Tool

Given the wide variety of commodities in the country, the performance of the peso has often been sensitive to fluctuations in commodity prices, especially oil, traditionally considered one of the "locomotives" of the Colombian economy. The chart below, shows data on the effective exchange rate of the Colombian Peso and the spot price of oil, from 2016 to the present.

There is a significant correlation between the dynamics of the two series, which, however, is not being confirmed this year. Starting in 2021, in fact, the two series appear to diverge with the price of oil rising, while the effective exchange rate shows a weakening.
In this context, the nature of the depreciation of the Colombian currency cannot be sought in the dynamics of commodity prices, but, on the contrary, can be read as the effect of the joint action of domestic and international factors.

The new wave of contagion from Covid-19. As is happening in other countries1, infections have resumed a strong upward dynamic in Colombia, which is going through its third wave of Covid-19 and is at all-time highs, currently exceeding 30,000 new cases per day.

In addition to the growing number of cases, also of concern is the slow pace of the vaccination campaign, with only 24.7% of the population vaccinated with the first dose (source: Our world in date). According to some analysts, the fear of a pandemic resurgence in emerging countries is directing investors toward safe-heaven currencies.

The protests in the cities.Protests against President Ivan Duque have been ongoing in several cities in Colombia for more than two months, marked by violent clashes between protesters and law enforcement that have left more than 60 people dead in the country, all civilians. The first anti-government demonstrations were organized on April 28 to contest a proposed fiscal maneuver, which, in order to contain the debt to GDP ratio, included an increase in VAT and the tax base. As the days passed, however, the reasons for discontent have expanded, incorporating the huge inequalities in the country and the increase in poverty, two issues that, according to the protesters, have been exacerbated by the ineffective management of the health crisis. Currently, the situation appears to be completely out of control, with the epicenter of the revolt having moved to the city of Calì, where repression by local police and the disappearance of dozens of young people are denounced. The Government of Ivan Duque, who in the meantime has decided to abandon the bill, finds itself facing an unprecedented social crisis just one year before the end of its mandate.
The United States, the European Union and the UN have also intervened in the Colombia riots, denouncing the excessive use of force by the local police.

External factors. As an emerging currency, the dynamics of the Colombian peso finally reflect the general level of risk appetite in the markets, which does not seem high at the moment, relative to bull trends in the greenback.

Finally, another element to be taken into account is the increase in yields on 10-year bonds, which rose from 4.8% at the beginning of January to 7% in July, and which show a significant proximity to the Colombian exchange rate against the dollar.

The 10-year bond yields have increased from 4.8% at the beginning of January to 7% in July.

Given the fragility of the Colombian economy, on Thursday July 1 the rating agency Fitch downgraded Colombia's bonds from BBB- to BB+ , which is in the area of "non investment grade".

The scenario of the Country is therefore complex, marked both by the shadow of the third wave of Covid-19 and by the economic and social tensions inside the Country. In this context of strong crisis, the country's central bank at the last monetary policy meeting at the end of June decided to maintain an expansionary policy, leaving the nominal interest rate unchanged at 1.75%. This decision is in contrast to that of other emerging countries such as Brazil and Russia, which are opting for a rate increase.

World trade in goods ended the year with 4% growth on pre-crisis levels, but the slowdown continues [ Read all ]