As we have already reported, the Covid-19 outbreak has had major impacts on international trade as it affected both producers' choices as well as consumers' preferences. The crisis has also had a significant impact on global supply chains, highlighting their main vulnerabilities.

In this context, maritime transport is undoubtedly a relevant issue, given the crucial role that shipping plays in the development of global trade (according to a report by SRM, around 90% of goods travel by sea).

Since the second half of 2020, the main ship freight cost indices have been marked by strong increases, reaching unprecedented peaks. The chart below compares the Baltic Dry Index, which summarises the freight rates of the main dry and bulk carriers, with the World Container Index, which captures charter rates on the main container ship routes.
Both indices (updated to September) show record rates of expansion, registering triple digit percentage changes compared to the corresponding month pf last year. While the BDI rose from $1411 to $4062 per container, the WCI exceeded $1000 (+301% compared to September 2020).


At the root of these tensions there seem to be, in addition to more strictly cyclical phenomena linked to the management of the pandemic, phenomena of a "structural" nature, which along with the former have generated a "perfect storm". In this analysis, our focus is on the latter, the effects of which may be felt over a longer period than the former.

While freight rates appear to be rising significantly, it is important to emphasize that this is not a common trend, but one which mainly affects some of the shipping routes on which sea trade unfolds. These are, in particular, those between Asia and the United States and between Asia and Europe, and, to a lesser extent, between Europe and the United States. According to Drewry data, the cost of transport between Shanghai and Los Angeles is about 9 times the freight rate in the opposite direction; the same applies to the Shanghai-Rotterdam route. 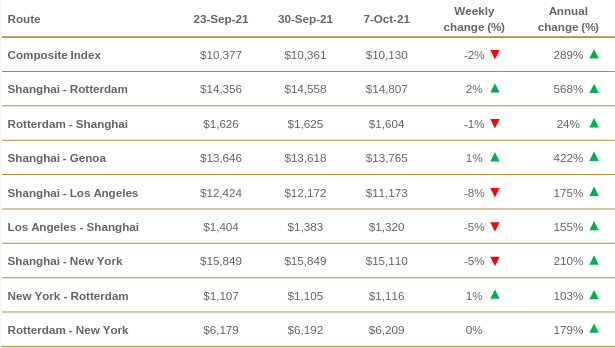 The reasons for this difference have to be found in the higher volumes traded from China to the US and from China to Europe rather than in the opposite direction.
The following chart compares the trends in containerised freight flows, in quantity (excluding bulk), between China and the United States. 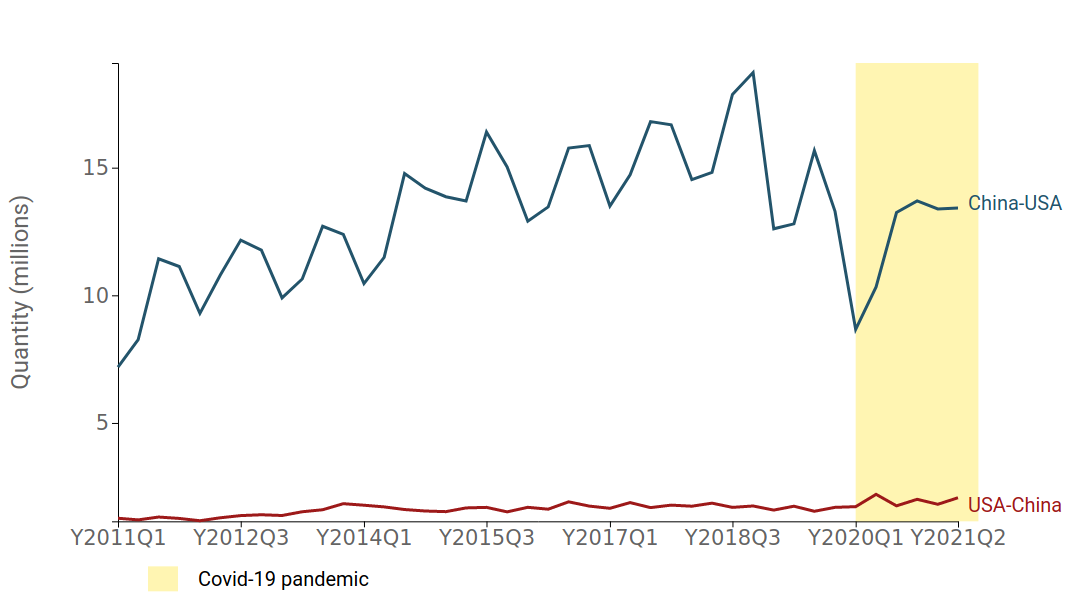 At first glance, we can easily notice the gap between the two flows in terms of the total volume of goods exchanged is considerable, even though it has recorded a slight decrease following the trade dispute between the two countries. This structural element, together with the economic one linked to the pandemic, has drastically altered the delicate balance on which the logistics system is based.

The same analysis can therefore be repeated for other routes affected by the phenomenon of higher freight rates, such as the China-EU and EU-US flows (and vice versa). 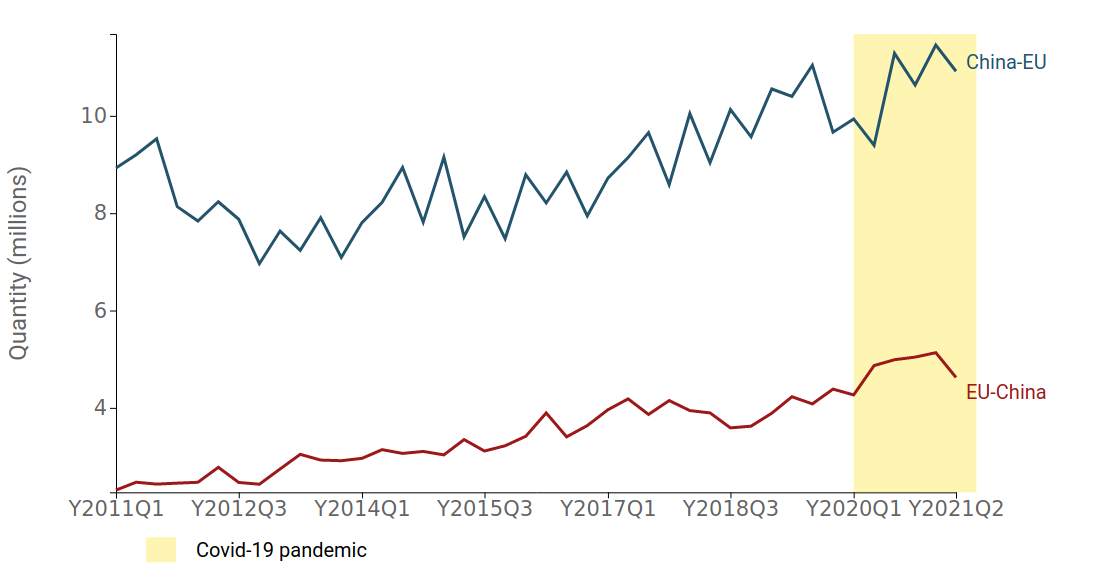 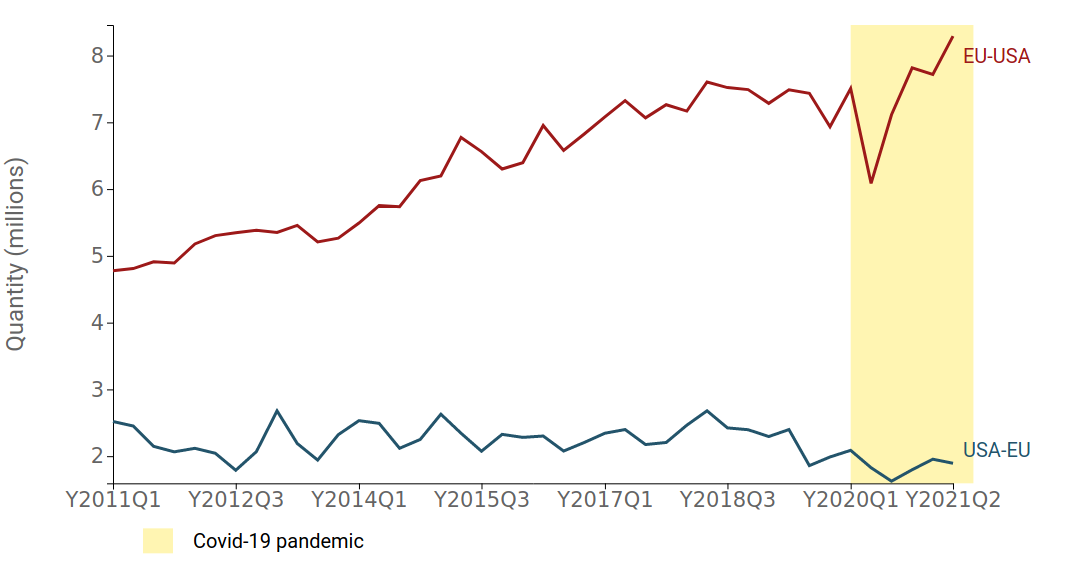 
Here again, we can see the large difference between the two flows, which seems to have widened for the routes between the US and the EU.

Looking at foreign trade data, it would therefore seem clear that the combination of the pandemic shock (such as the infrastructural management of ports and the loading and unloading of goods) with long-term structural factors has breaked down the transport optimisation mechanism.
A direct consequence of this rupture is the accumulation of container ships outside certain ports, causing clear difficulties in carrying out the usual loading and unloading operations and generating a real logistical 'traffic jam' (according to seaexplorer, on 8 October there were more than 571, compared with 362 at the end of August).

The structural imbalances between the different sea routes, together with the different timing of the industrial recovery in the world's economies following the pandemic crisis, have played a major role in the current upward pressure on freight rates. Given the complexity of the elements that make up the current scenario, it is reasonable to expect that, while economic phenomena more specifically linked to the pandemic management could gradually be reabsorbed in the short-to-medium term, bottlenecks on the supply side may last for a longer period. For this reason, trends in transport costs need to be tracked and analysed systematically as they constitute vital information for describing world trade trends.