New Twist in Turkey (and Tailwind for Safe Haven Currencies)

For our exchange rates analysis, Turkey takes center stage again this week. After cutting its benchmark interest rate from 19% to 18% at the end of September, as discussed in a previous article, yesterday the Central Bank of the Republic of Turkey (TCMB) reduced its policy rate by 200 basis points to 16%.
At the moment, the attention of economic analysts is therefore focused on the real interest rate, losing ground after the latest move by the central institution, in a context of solid 19.6% inflation rate in September. For the average of 2021, the latest World Economic Outlook of the International Monetary Fund (IMF) predicts an inflation rate at 17%, and a decrease to 15% for 2022. The Turkish inflationary situation therefore does not seem to be heading towards a short-term resolution.

According to the central bank's statement, the reasons for this choice would lie in combating the shrinking effect of commercial and personal loans exerted by high interest rates, which is proving greater than expected.

The effect of the TCMB's latest move on the national currency's exchange rate has been an inevitable further weakening: in the last two days alone, the lira lost 3.7% of its value against the dollar (and 16.2% since the beginning of September). 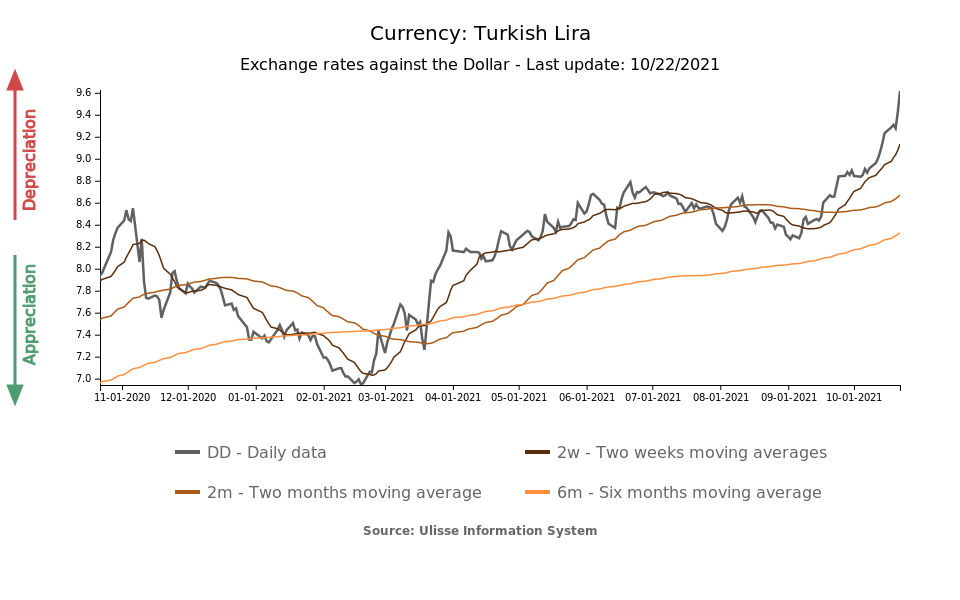 However, it is not only the Turkish lira that has taken center stage in the FX world over the course of the week. Strong currencies indeed seem to be capturing analysts' attention as well as investors' preferences.
Looking at the US dollar, we can see that the currency is currently experiencing its moments of greatest strength over the past year. Specifically, the greenback reached 1.15 USD per EUR in early October, to then close the week at 1.16. 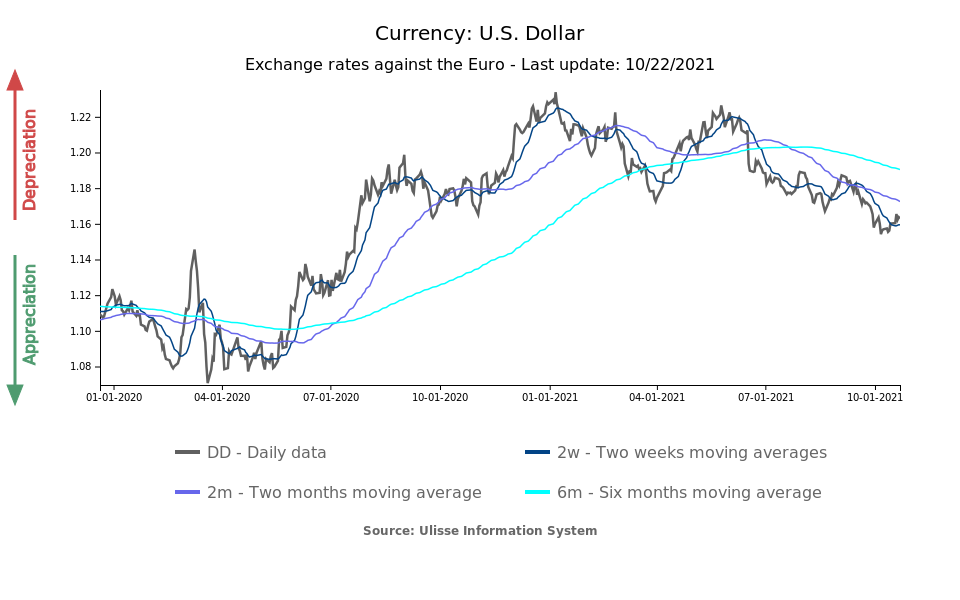 If the dollar trend seems linked to expectations of a tightening cycle for US monetary policy, this dynamics also appears to relate to a widespread sentiment of risk flight. Observing recent exchange rates' dynamics against the dollar, we can see the presence of a weakening in Latin America and in several Eastern European countries (Romania, Hungary, Czech Republic and Poland), while the currencies of the Nordic European countries such as the Swedish krona, Norwegian krone and British pound are appreciating; the same strengthening trend can be noticed for the Canadian and Australian dollar, as well.

Besides, in the strengthening of several currencies of the developed cluster we can see more than the quest for a safe haven: in some cases it is in fact necessary to mention the recent increase in commodity prices, which for some goods have exceeded the pre-Covid levels (see the recent dynamics of oil and natural gas). The case of Russia, a country that is not yet in the cluster of developed countries, but which is one of the largest oil exporters in the world, confirms with the recent strengthening of its currency the contribution of the price factor to exchange rates' dynamics.