Our weekly currency update focuses today on the currencies of Turkey and Thailand, which experienced for different reasons dramatic crises during the pandemic, and that in the last week have recorded diametrically opposite trends.

In recent days, the Turkish lira has once again risen to the center of attention of financial operators, marking a new negative record in terms of exchange rate against the greenback. In an overnight decree signed by President Erdogan on Thursday, October 14, three central bankers were removed from their institutional positions. Overall, in the last financial week the currency reacted negatively, collapsing by about 1.7% against the US dollar, and sinking to an all-time low of 9.15 TRY per USD.

As recounted in a previous article, Erdogan's continued interference in the country's monetary policy has corroded the sentiment of financial operators; at the moment, the value of the lira is falling more significantly than any other emerging market currency.
Moreover, in contrast to other EM currencies1, the recent decision of the monetary policy committee to cut the benchmark interest rate from 19% to 18% has caused surprise among analysts. Most investors expected, at most, an unchanged interest rate in view of the further increase in inflation: in August the consumer price index exceeded the threshold of 19% and was further confirmed in September (+19.6%). 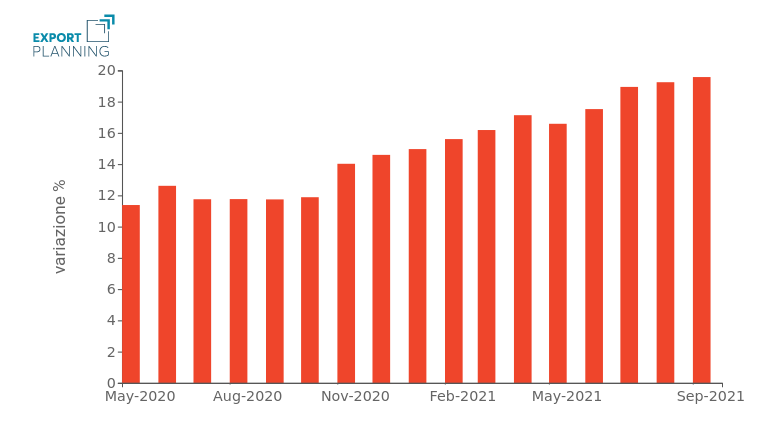 Source: ExportPlanning elaboration on Central Bank of the Republic of Turkey data.


The rate cut has destroyed the credibility that the new central bank governor, Sahap Kavcioglu, has been trying to build for the Central Bank of the Republic of Turkey over the past six months. Against this backdrop, the central bank defended its position by stating that, while the ongoing inflation is only transitory in nature, "the monetary tightening has started to have a greater than expected contractionary effect on commercial lending" and deemed it necessary to revise the monetary policy stance.

Optimism for Thai baht on the wave of reopenings

Moving eastward, we can report an incredible turnaround for the Thai baht, following last Monday's announcement by Prime Minister Prayuth Chan-Ocha: for visitors from countries with low epidemiological risk, there will be a relaxation of travel requirements starting from November.
The positive reaction of the currency is clearly shown in the chart below, which illustrates the exchange rate of the baht against the dollar: the Thai currency closed the week at 33.33 THB against the dollar, recording on Monday, October 11 alone a jump of 1.5 percentage points. 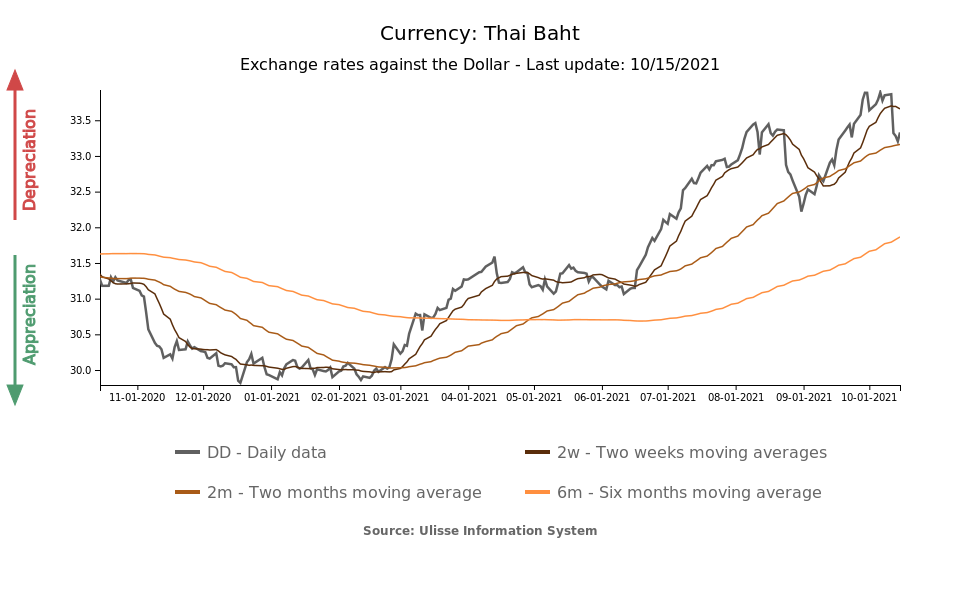 According to Bloomberg, the strategy put in place by the Thai government aims to achieve a forced cohabitation climate with Covid-19, after the heavy slump in foreign tourism experienced during the closures, and the relative erosion of the country's economy. The disadvantage for the Thai economy, which is highly reliant on tourism, was clearly recorded by its currency, which lost 13% of its value between February and October 2021.

1. For a more in-depth look at the subject please see the article "South Korea heading towards monetary policy normalization".