Break into an accelerating foreign market to find your BLue OCean

For over half a century, the strategic analysis of companies has been the subject of growing attention from scholars and analysts. Some studies have turned out to be so important as to be a watershed between a before and an after of the strategic management of companies. One of these studies is certainly the "Blue Ocean Strategy"[1] developed at the French INSEAD by professors W. Chan Kim and Renée Mauborgne.

The "BLue OCean" strategy is based on the idea that market boundaries and industry structure are not a given and can be reconstructed from the actions and beliefs of industry players. It consists in the search on a market for a competitive advantage so high as to make competition irrelevant. This strategy can have different declinations:

The first strategy presents much more risk than the second. In fact, the search for a Blue Ocean through the differentiation of one's offer presents the risk that demand does not recognize the value of the proposed differentiation, making the company's investments in innovation useless.
Conversely, the search for a BLue OCean in a fast-growing foreign market with few competitors, presents few risks, related only to the correct 'localisation' of the company's offer. Localisation activities also follow rules well known to internationalisation experts, the application of which can minimise the risk of failure.

In the search for a BLOC, the biggest problem is to identify, ahead of competitors, a foreign market that can be a BLue OCean for the company.

In this article Measuring demand potential: big data for market selection the stages crossed by a process of development of imports in a foreign market are described, and can be summarized in the following graph. 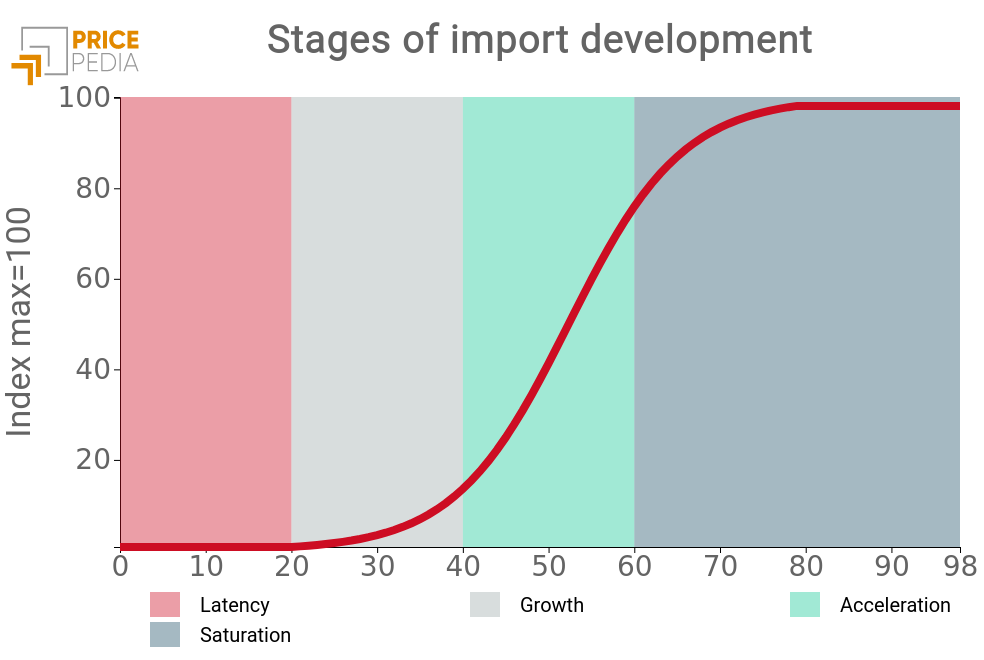 It is evident that the most advantageous stage to enter a market is that of acceleration. In this stage, demand grows faster than the number of competitors, allowing high returns to the companies present in the market, which can be used to compensate for the localization investments made and finance marketing and communication investments, such as to consolidate the company's competitive positioning.

The same article referred to above describes the methodology developed by Export Planning for the identification of foreign markets which may be BLOC. The basic idea consists in hypothesizing that the import development process of a given product follows similar dynamics in the various countries according to the changes in some fundamental aspects of its economy: from the disposable income of consumers, to the degree of development ; from its degree of openness to foreign trade to the industrial specialization of the country. It is therefore possible to study the "form" in which imports of that product have developed in the more advanced countries to obtain a reference model of the possible dynamics in developing countries.

Resilience to the international cycle

One of the advantages of BLOC foreign markets is that they are relatively unaffected by the international cycle. The forces that govern the first stages of the development process of imports of a product in a given country are, in fact, long-term, linked to the country's structural development.
Only the "saturation" phase is more sensitive to the economic cycle: if the economy of a country is slowing down, imports of products already largely present in the country tend to show a high elasticity to the cycle.
Imports that are in the growth phase and, above all, those in the acceleration phase are, on the other hand, more resilient to the cycle. It is necessary for the country to be hit by a significant economic crisis so that the structural processes that fuel the accelerating phase of imports of the various products are interrupted.
The uncertainties about the slowdown/recession that could hit the world economy in 2023 suggest that the search for cycle-resilient BLOC foreign markets could be, at this moment, an optimal solution.

The case of tapware

Taps and fittings is one Italian sector that could be particularly interested in seeking foreign BLOC markets. After an exceptional 2021, in fact, Italian taps and fittings exports in quantity declined significantly in 2022, reaching an all-time low in the third quarter of 2022. Exports in value held up, but only thanks to the strong increase in prices. In this situation, 2023 looks very problematic with export values 'nailed down' to 2021 levels. In this context, it is crucial for Italian companies to identify foreign BLOC markets, towards which they can develop entry projects.

For this reason, we have focused our analysis on the most representative product of Italian tapware:bath and kitchen mixers.
Since the growth of imports of this product is linked to a structural change in a country's housing and distribution of bathroom materials, we looked for those countries with signs of accelerating imports in the following products: bath mixers, sanitary ware, tiles, bathroom furniture.

Among the various potential BLOC markets, Croatia seems interesting to us, of which we report the import dynamics of the four products considered. 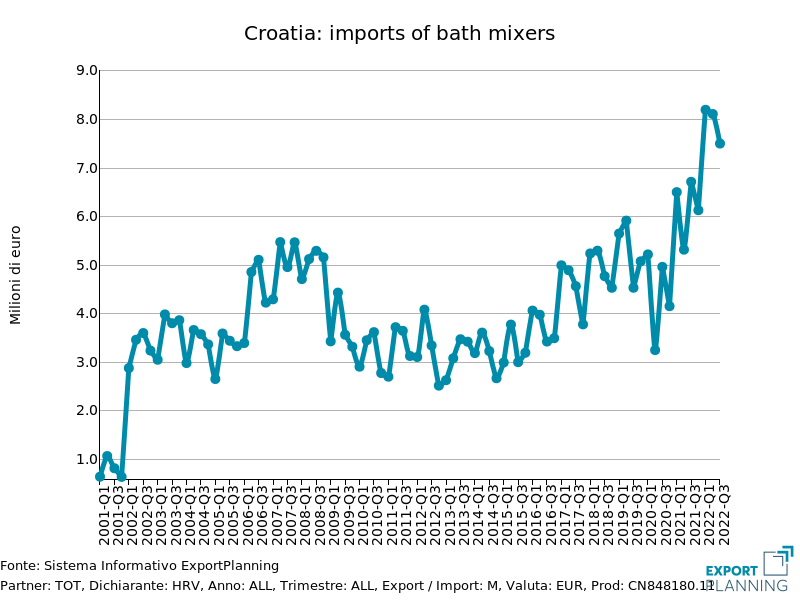 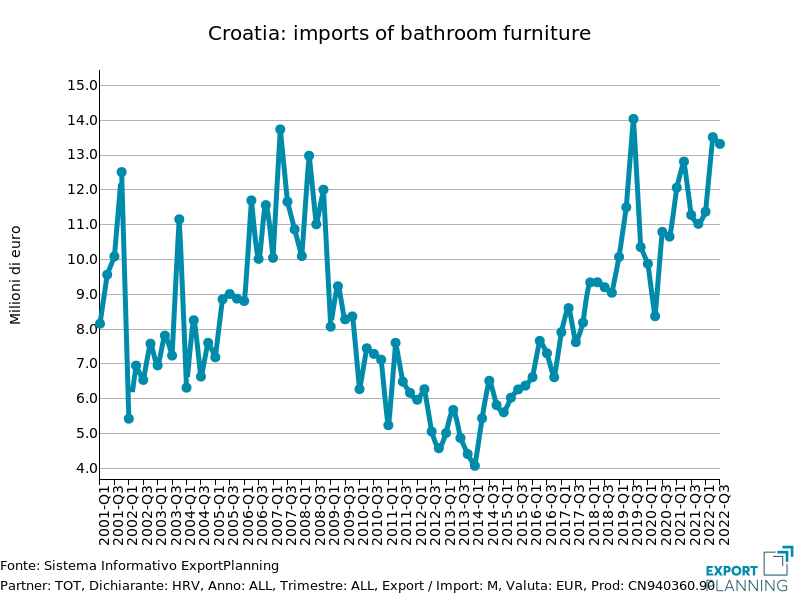 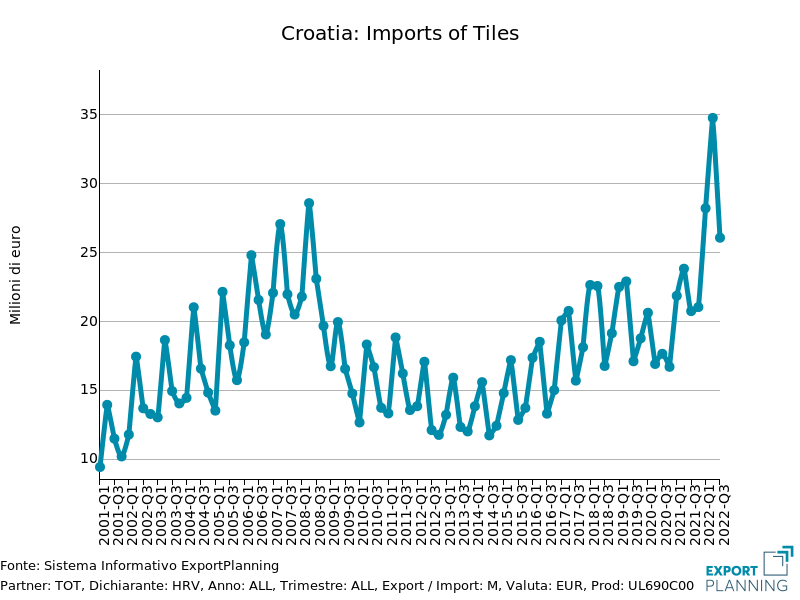 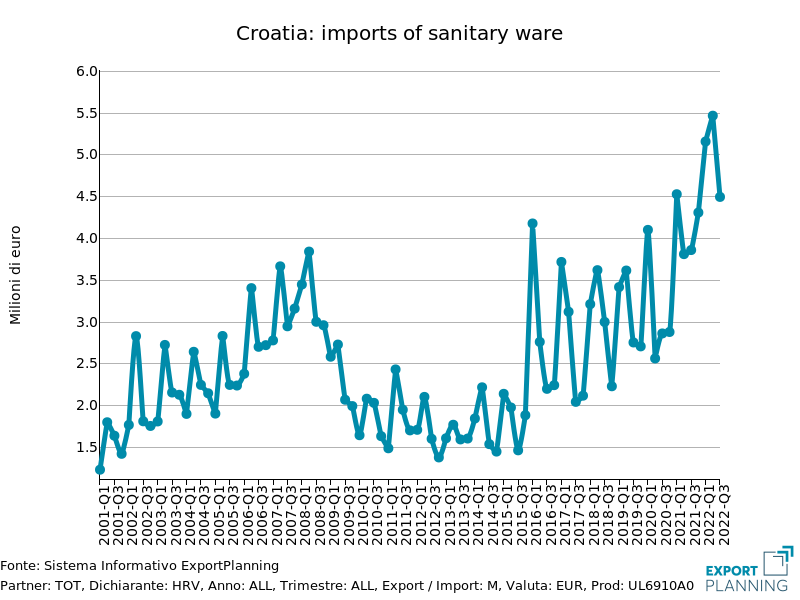 Croatia was hit very hard by the Great Recession of 2009. The country experienced a decrease in Gross Domestic Product (GDP) for six consecutive years. It was only after the country's entry into the EU on 1 January 2013 that the conditions for a return to growth were created, which materialised significantly in the period 2015-2019 with an average annual growth rate of over 3%. After the pandemic crisis of 2020, Croatia saw its GDP grow by 10% and 6% in 2021 and 2022, respectively. The outlook is for a continued GDP growth rate close to 3% in the coming years as well
Thanks to this growth, Croatia's per capita product in dollars increased from $12 thousand in 2015 to $17 thousand in 2022, and is expected to reach $20 thousand in 2024.

On 1 January 2023, Croatia will crown a ten-year reform process by joining the Eurozone. This will only strengthen its economy and economic ties with other European countries

Considering the small economic size of the country (only 4 million inhabitants, slightly less than the inhabitants of Emilia Romagna), Croatia is a candidate as a possible BLOC market for an Italian bath mixer company wishing to invest in a structural entry project in a foreign market.

Go to Market Selection e find out your
"BLOC" market

[1] The first edition of the book Blue Ocean Strategy by W. Chan Kim and Renée Mauborgne is from 2004, published by Harvard Business Review Press.