Central bankers around the world turn to rate cuts

The major events in latest economic news point towards a generalized expansionary monetary policy action, confirming a trend already highlighted in June.
The main reasons for interest rates cuts focus on economic growth slowdown. A few days ago the International Monetary Fund published an update to the April publication of the World Economic Outlook: while global economic growth for 2019 was expected at 3.3% in spring, in July the estimate has been revised downwards, to 3.2%. Among the reasons for the revision, the Fund mentioned a weaker than expected global economic activity, in a context of geopolitical tensions (trade war not yet concluded) and uncertainty (e.g. on the Brexit issue).
A real-time measure of the current weakness of the economic cycle is world trade growth in H1-2019 (see the article "Has the Global Economic Slowdown Stopped?").

The one rate cut that certainly did not go unnoticed was recently carried out by the Federal Reserve. After several months in which the bank repeatedly declared to be ready to intervene, on Wednesday the target range for federal funds rate was finally reduced by 0.25%. The new target is now 2-2.25%.
President Trump had long been calling for a strong Fed action in this direction, and a 0.25% rate cut has not been deemed sufficient.

....As usual, Powell let us down, but at least he is ending quantitative tightening, which shouldn’t have started in the first place - no inflation. We are winning anyway, but I am certainly not getting much help from the Federal Reserve!

Counterintuitively, the dollar appreciated on the day after the announcement (+1.8% against the euro). On August 2 the greenback lost part of its gains, and is now back at 1.11 euro per dollar. 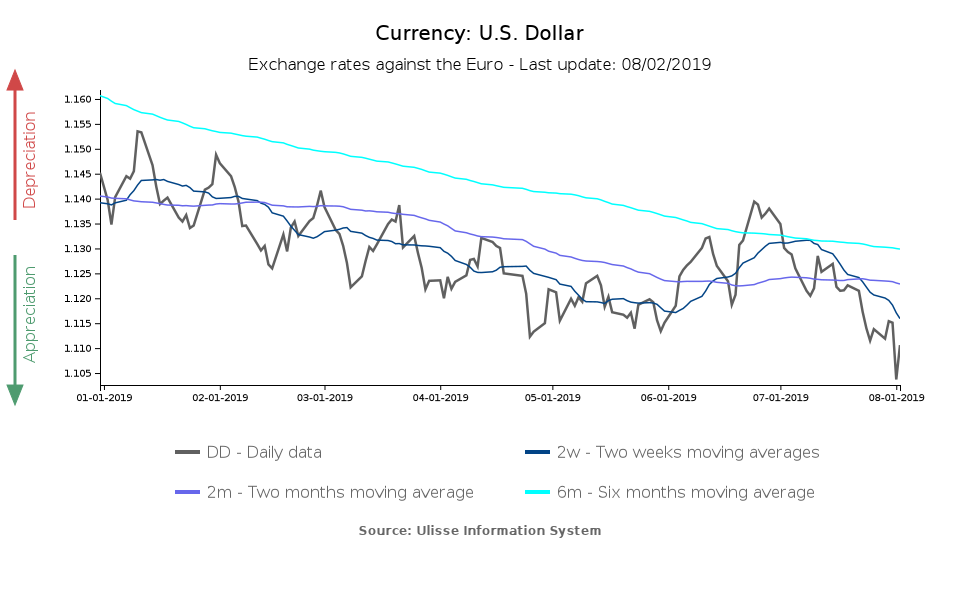 On Wednesday, the Banco Central do Brasil reduced its reference interest rate (Selic) as well, reaching 6%. This is its first cut since March 2018. According to the central bank, the Brazilian economy needs an expansive monetary policy in its cyclical situation, in order to support economic recovery.
The bank took into account internal factors, such as the progress made on the pension reform front, and the inflation situation which is under control. The behavior of foreign central banks and the risks associated with a slowdown in global growth weighed on the choice, as well.

The Russian central bank, in turn, mentioned the slowdown in global growth among the risk factors that weigh on the outlook, and that led it to opt for a rate cut last week. This is its second summer cut: -0.25% in June (from 7.75% to 7.5%) and again another -0.25% in July, reaching 7.25%.
As in the case of Brazil, the reasons behind the choice also lie in the unsatisfactory growth of national economy, below expectations since the beginning of 2019. In line with this framework, the bank left the door open for the possibility of further cuts.

A week ago, Turkey entered a new season of expansionary monetary policy, with a 425 basis points cut, from 24% to 19.75% (see the article "Turkish Lira: Central Bank Cuts Rates, but Exchange Rate Risk is Still High").

Last but not least, the ECB. The Governing Council of the European Central Bank met at the end of July, confirming its willingness to embrace a highly accommodative monetary policy in the next future, since inflation is persistently below the target. Analysts expect monetary easing instruments to take the field in September; for now, rates have been left unchanged.

No shadow of doubt, we are quite in the midst of an easing wave. The common cause for central banks' concern is weak economic growth, both nationally and globally, perceived as a risk factor. International geopolitical tensions constitute a source of uncertainty, as well: until a resolution is reached, it might be quite unlikely to witness sustained economic growth.