How much is the Chinese Economy Growing?

Reliable measures of growth potential are key to choose the right target market.

Doubts about the quality of China's economic statistics

A few days ago, a study published by the Rhodium Group (China's GDP: The Costs of Omertà), claimed that China's official economic data for the last 4 years has been "too smooth to be realistic".
Rhodium Group's own indicator, a weighted average of 103 official Chinese industrial output statistics, showed significant volatility in industrial output between 2015 and 2018. For example, this indicator records an increase in industrial production close to zero in the summer of 2015 and more than two digits in the first quarter of 2017. However, this strong fluctuation was not reflected in the official figures of economic growth of Chinese GDP, which amounted to 6.9% (yoy) in Q3-2015 and 6.8% in Q1-2017. Similarly, the indicator measures a sharp slowdown in the summer of 2018; conversely, GDP slowed only from 6.7% (yoy) in the second quarter to 6.4% in the fourth.
This misalignment between the dynamics of activity levels in industry and economic growth is very strange, because the industry weighs 40% in the Chinese economy and, above all, the services, which account for more than half of the GDP, are considered the most volatile component of the economy.

Doubts about the quality of official Chinese statistics date back to at least the late 1990s. At the time, Thomas Rawski [1] observed that in China, during the Asian financial crisis that began in 1997, electricity production decreased much more than GDP.
Since then, many other studies have cast doubt on the quality of Chinese statistics. Doubts also arise from the observation that the official Chinese data have never been revised (which is normal for other countries). The reason is that, in China, discussions on the accuracy of economic data are seen internally as a possible attack on the legitimacy of the Communist Party. A different measure of economic growth could suggest an alternative political message to that of the Party leadership. If China is growing at a slower pace, it is no longer a country launched to become the world's leading economy in a short time.

A double measurement of Chinese imports

The information available on ExportPlanning (source: Ulisse Information System) makes it possible to contribute to this debate and, above all, to provide reliable information on the potential of China as an export market. As is known, each flow of world trade is declared twice: by the exporting company and by the importing company. These declarations are then collected by the respective statistical institutes and contribute to forming the official statistics of the different countries. China's imports of goods can therefore be measured either by using the Chinese companies' import declarations, or by using the export declarations to China made by the companies from which the flows originate.

The following chart shows the yoy rate of change of quarterly Chinese imports at constant prices, measured by aggregating the declarations of: 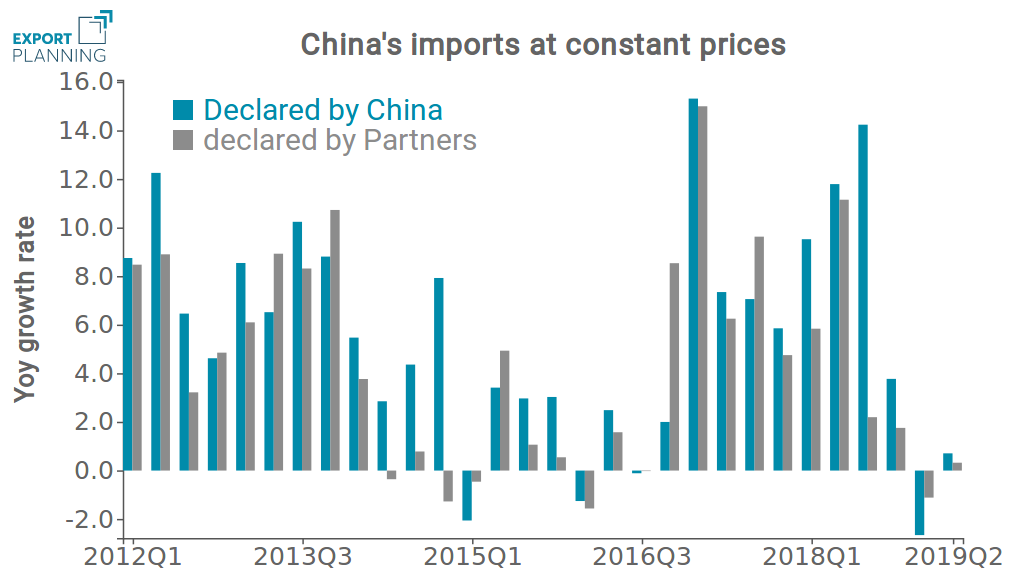 The analysis of this graph reveals the following facts:

This brief analysis supports the hypotesis that the current Chinese economy slowdown could be worse than the one pictured by official Chinese data.
China, as an export market, offers very goods prospects in terms of levels; less certain are the prospects in terms of growth rates. This distinction is important for an assessment of the opportunities offered by the Chinese market: the higher the degree of economic maturity, the greater the degree of competition on the market. Import statistics (better if obtained by aggregating export declarations of partner countries) can be an important indicator to evaluate the opportunities offered by the Chinese market.