Among all currencies, two of them dominated this week’s economic discussion: Argentine peso and British pound.

As already said in previous articles, August has been a tough month for Argentina, marked by political events that rattled financial markets, shifted investors away from the country and negatively impacted on the currency. In mid-August, several rating agencies downgraded Argentina1, while the central bank hemorrhaged its international reserves in the attempt to shore up the peso.

In the face of a progressive deterioration of Argentine economic situation and galloping inflation, in the last week of August Argentina asked its creditors – first of all, the IMF - for a restructuration of its debt. Standard & Poor’s therefore declared a “selective default” for Argentina.

On September 1, the Banco Central de la República Argentina announced capital control measures in order to “Safeguard Exchange Rate Stability and Savers”.
No restrictions have been placed on the purchase of foreign currency for foreign trade purposes; nonetheless, exporters of goods and services are now compelled to “exchange their foreign currency earnings in the domestic market”, within a specific amount of time. “Individuals will have no limitation to buy foreign currency for up to $10,000 a month”, but “No amount in excess of $10,000 a month per person may be transferred abroad”. As regards resident legal persons, they will require the BCRA’s approval to e.g. transfer earnings and dividends abroad. 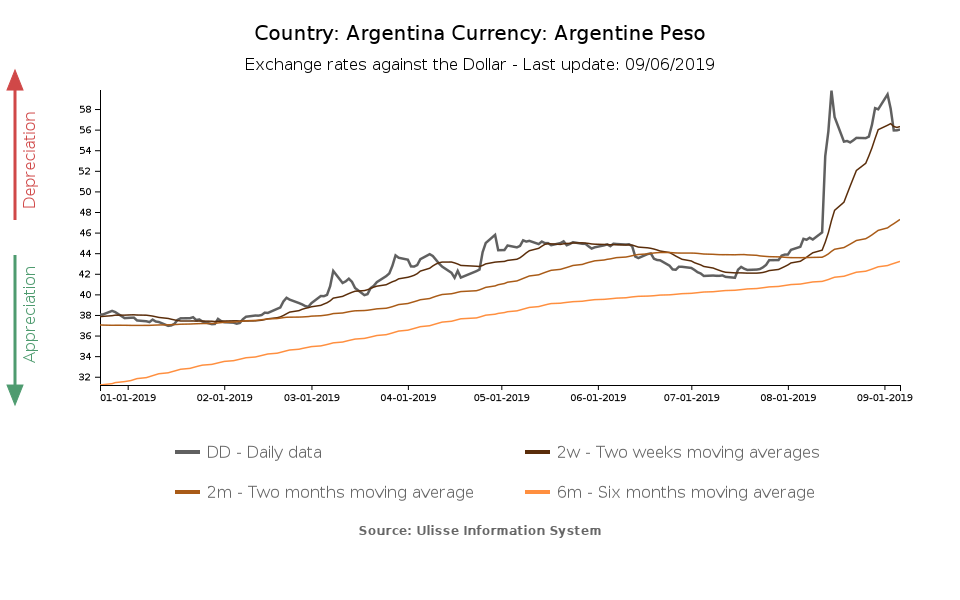 These measures, that have been in place for just a few days, managed to stop the peso’s fall. For the moment, the currency has recovered almost 6% of its value against the dollar.

The other theme that dominated this week’s economic discussion refers to the latest Brexit developments. In the last days, the opposition managed to inflict two major defeats to PM Johnson’s intransigent Brexit-at-any-cost position (current deadline: October 31).

These two events have therefore partially – and at least for now – reduced the risk of a no-deal Brexit. The reaction of the pound has been favorable: as can be seen from the chart below, between September 3 and 6, the British currency recovered more than 2% of its value against the dollar.

The performance of the pound thus shows a clear market approval when the risk of a no-deal Brexit decreases. Nonetheless, in spite of this temporary recovery, the outlook for the next future still looks highly uncertain. Risks for the pound are therefore on the downside, all the more so if elections will actually take place: in this case, electoral uncertainty would add to Brexit uncertainty, both weighing on the British currency.