European exports to the Russian market showed a significant fall, due to administrative and economic factors.

Since March 2014, the European Union has launched a series of restrictive measures against Russia in response to the Ukrainian crisis and the subsequent annexation of Crimean territories. These economic and diplomatic concern both individual restrictive measures and economic sanctions, currently extend until 31 January 2020. These measures provide for:

In response to the European sanctions, in August 2014 Moscow launched a series of counter-sanctions against the European Union and other allied countries, like United States, Canada, Australia and Norway. This sanctioning regime affects certain food products and will be in force until the end of December 2020, subject to further extensions.

The effects of the intensification of EU-Russia tensions on trade

What effect has this mechanism of sanctions had on EU exports to the Russian market? The graph below shows the EU export performancein recent years. It is clear that EU exports have been significantly reduced since 2014. The contraction of European exports is particularly evident for 2015 and 2016, after which there has been a slight recovery, but without returning to the levels of 2013. 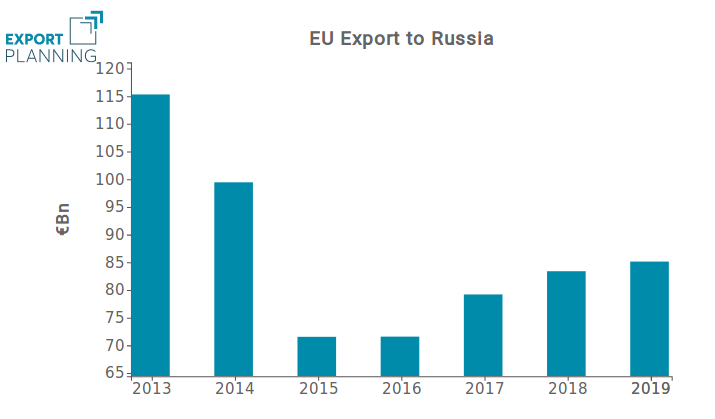 However, the reasons for the contraction in European exports recorded on the Russian market are to be found in a number of concomitant factors, which have been added to the sanctions regime in force between the EU and Russia since the second half of 2014.
The graph below provides an analysis of the performance of the various industries of European basket of exports to the Russian Federation, comparing the average annual rate of change recorded in the post-sanctions period (2014-2019) with the rate of change of the immediately preceding period (2011-2013). In order to identify the sectors most exposed to the sanctions regime, each ball is proportional to the level of EU exports in 2013.

It is particularly evident that the contraction in exports has affected almost all industries, pointing out difficulties in Russian demand. As mentioned above, in fact, in addition to the direct effect of Russian counter-measures on the agri-food sector, EU exports have been hit by the economic crisis that has affected the Russian economy following the fall in oil prices that began in 2014 and the entry into force of specific restrictions for foreign companies (not part of the Eurasian Customs Union with Russia, Belarus, Kazakhstan, Armenia and Kyrgyzstan) in public procurement.

The performance of consumer goods

The first focus is dedicated to agrifood products, which, as mentioned above, was the main subject of the Russian embargo that affected both fresh and packaged products. 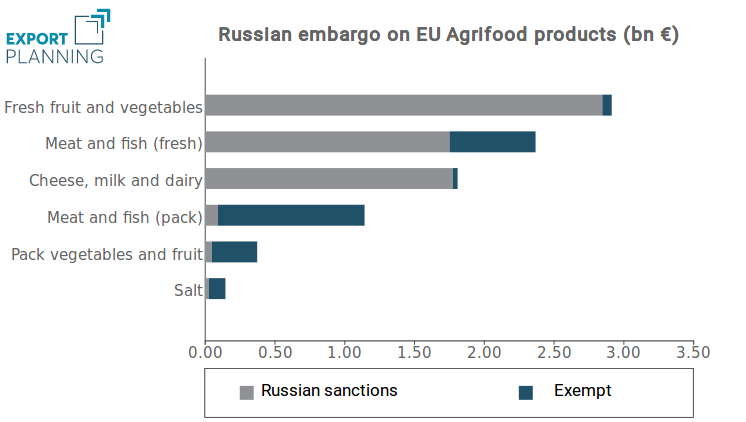 The fresh food sector has been hit hardest, as the existing embargo has more than halved the value of European exports to the market between 2013 and 2019. Exports from Poland, Germany and the Netherlands were particularly affected, mainly due to the contraction in fruit and vegetables, meat and fresh fish. As far as packaged products are concerned, on the other hand, exports from the Netherlands, France and Germany recorded the biggest drops, which affected not only products subject to sanctions, such as cheese, fish and packaged meat, but also other types of goods, such as confectionery and wine. In particular, the reduction of these types of goods must be linked above all to the loss of purchasing power of the Russian population due to the economic crisis. After 2016, in fact, imports of these categories of food have increased slightly, but without returning to the values of 2013.

In addition, there were also negative performances recorded by European exports of the Fashion and Health System. In both cases, however, these contractions do not only concern European partners.
Also in this case, the effect of the Russian economic crisis is evident, to which were added the effects of the Russian government's import restrictions policies approved during 2015. The economic crisis has clearly shown the limits of a development model focused on the exploitation of energy resources and the Russian government has therefore promoted activities aimed at diversifying the economy. Within the ambitious Russian plan of Import Substitution, which aims to reduce imports and increase domestic production, several restrictive measures in the field of public procurement have found space. In particular, these measures have prohibited public authorities from obtaining supplies of foreign-sourced cars, medicines and medical devices, clothing and software where a domestic alternative is available.

The economic recession and the subsequent restrictions on imports are at the root of the significant contractions in imports of pharmaceuticals from India, France and Belgium and imports of footwear, leather goods and cosmetics from China, Germany and Italy.

The performance of capital goods

The weight of the economic recession and import restrictions was also evident for the capital goods and intermediate goods sectors. The most significant reduction was in fact in the Means of Transport sector, due to the sharp reduction in imports of vehicles from European partners such as Germany and the United Kingdom, and from international partners such as Japan and South Korea.

In conclusion, in addition to economic sanctions, EU exports appear to have been penalised mainly by the severe economic crisis and the restrictions imposed by the Russian Government. In the most recent period, renewed economic and geopolitical stability seems to point to better times for the market, especially in view of the recovery in domestic demand, as written in the article Russian Ruble: a Phase of Stability. Moreover, Russia's strong positive balance with the EU, thanks to exports of oil and natural gas to European markets, does not seem to point out potential threats for bilateral trade relations. However, before approaching the Russian market it is necessary to know in depth the state of the geopolitical relations of the country with its geographical area and the prospects of industrial policy of the country, in order to be able to take advantage of the opportunities offered minimizing the risks.