A Map of main applications and top producing countries worldwide

This article was written in collaboration with Acimit (the Association of Italian Textile Machinery Manufacturers)1.

As documented by the 2019 preliminary data, and as illustrated in a previous article ("The leading role of European Technical Textiles"), Technical textiles applications1 are showing a long-run growth.
In 2019, world trade in technical textiles reached a new peak in euro values (estimated at 41.5 billion), at levels more than double those of ten years earlier2. 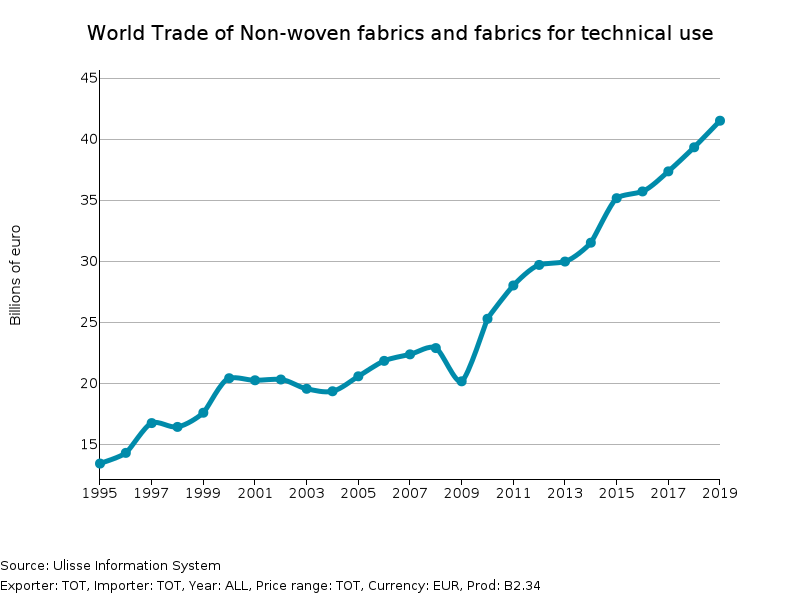 The worldwide ranking of main producing countries of Technical Textiles sees the leadership of China, by far the leading 2019 producer country of nonwovens and technical textiles, with an estimated annual production value of about 17 billion US Dollars. 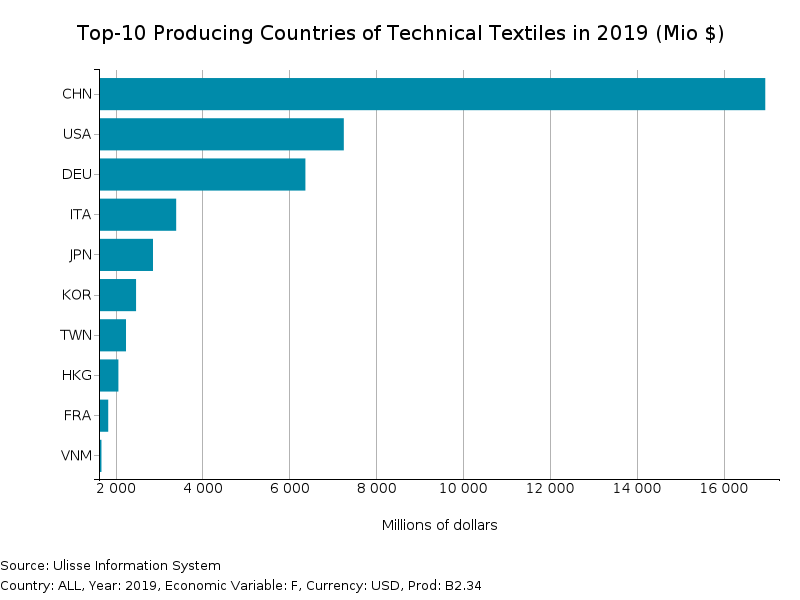 However, behind China, in the ranking there are numerous high-income competing countries, which testifies to the presence of particularly differentiating technological content for this range of products:

The wide range of applications of the Technical Textiles industry suggests, however, to decline the analysis of producing countries, and possible target markets of technology suppliers, for business areas.
Although not exhaustive3, this article will focus on the following business areas of Technical Textiles' applications, as top-potential end-users for textile machinery manufacturers:

China and Vietnam, but also Italy, France and Germany top world manufacturers of technical textiles' applications in the Sportswear industry

The ranking of the top-10 producing countries of Unwoven, felt or coated garments (see the graph on the left below) shows the undisputed leadership of China, which - with an estimated production of 4.8 billion USD - accounted for about 29 percent of worldwide production in 2019. Behind China, there is the positioning of Vietnam (1.7 bn USD) and Italy (more than 1 bn USD).

Tracksuits not knitted or crocheted

The ranking of the top-10 producing countries of Tracksuits not knitted or crocheted (see the graph on the right below) highlights, instead, the co-leadership of France (with an estimated 2019 production value of 611 million US Dollars) and Italy (546 mio USD), preceding China, India, Egypt, India and Vietnam. 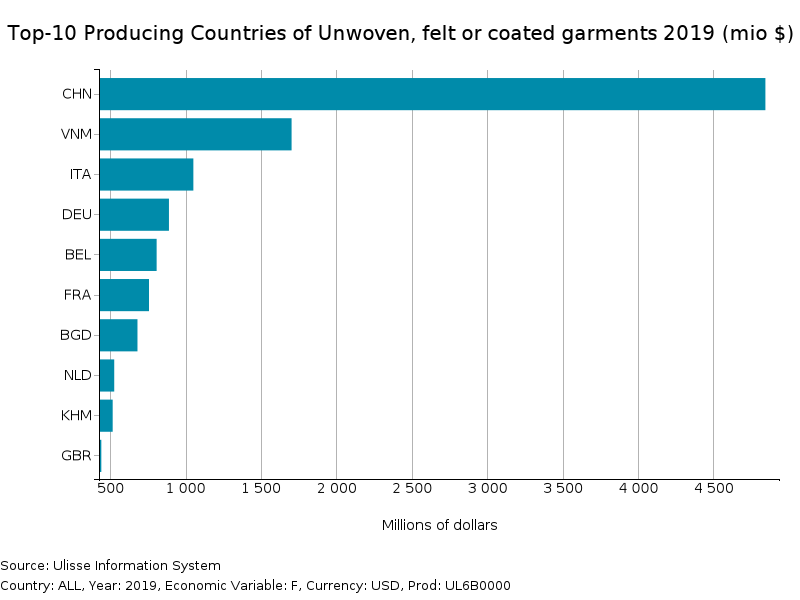 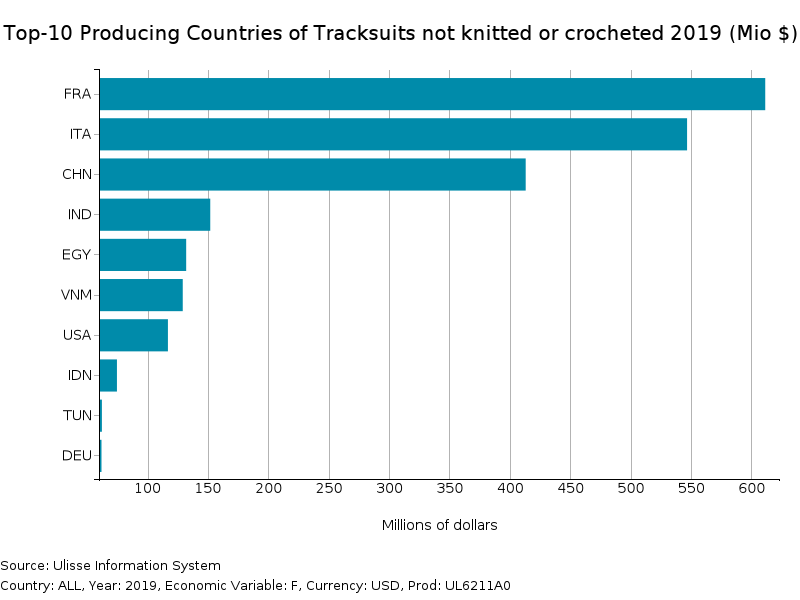 With reference to the automotive industry, the analysis reported here focuses on a couple of representative cases of technical textile applications.

The ranking of the top-10 producing countries of Seats of a kind used for motor vehicles (see the graph on the left below) shows in first place Germany, with an estimated production value in 2019 of 670 million US Dollars, preceding - in order - United States (534 mio USD) and Czech Republic (462 mio USD). Behind them are the productions of Mexico (USD 286 million), Turkey (USD 212 million) and Italy (USD 188 million).

The ranking of the top-10 producing countries of Seats of a kind used on aircraft (see the graph on the right below) highlights the leadership of United Kingdom (with an estimated 2019 production value in the region of 1 billion US Dollars), preceding - in order - United States (661 million USD), Germany (457 mio USD), China (382 mio USD). 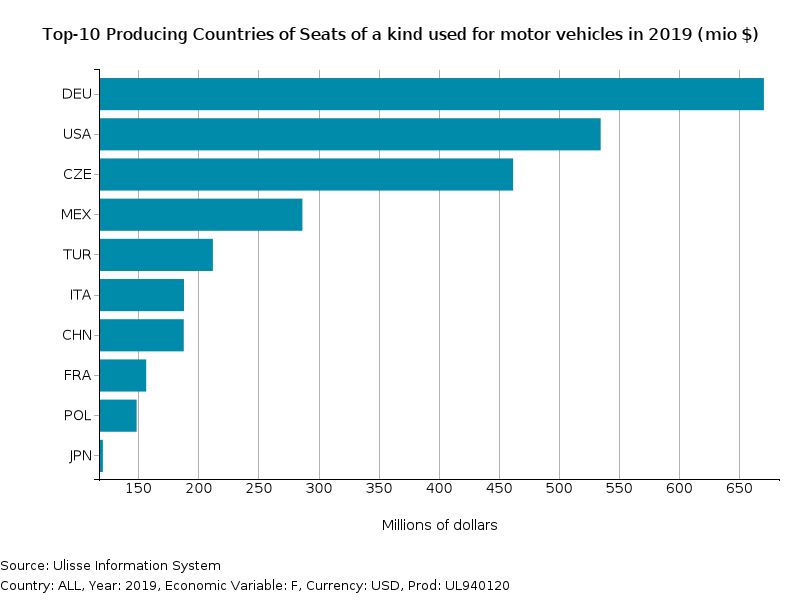 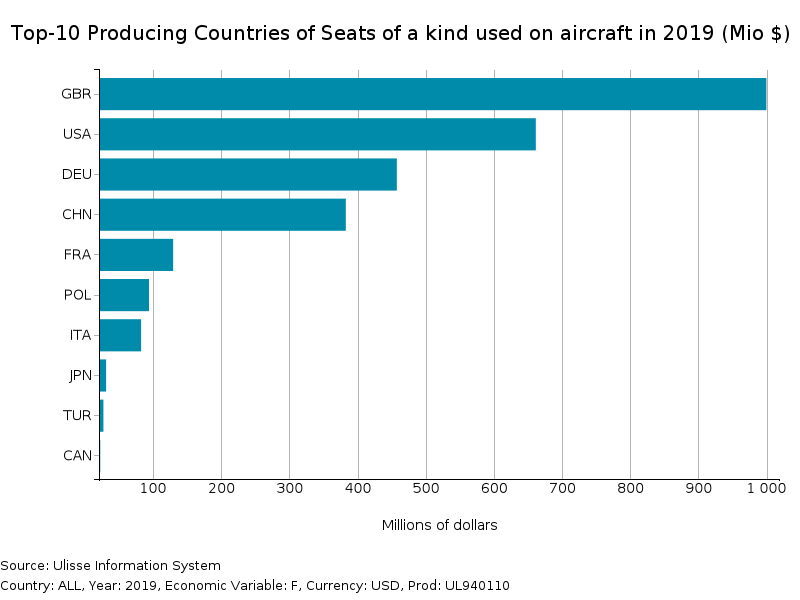 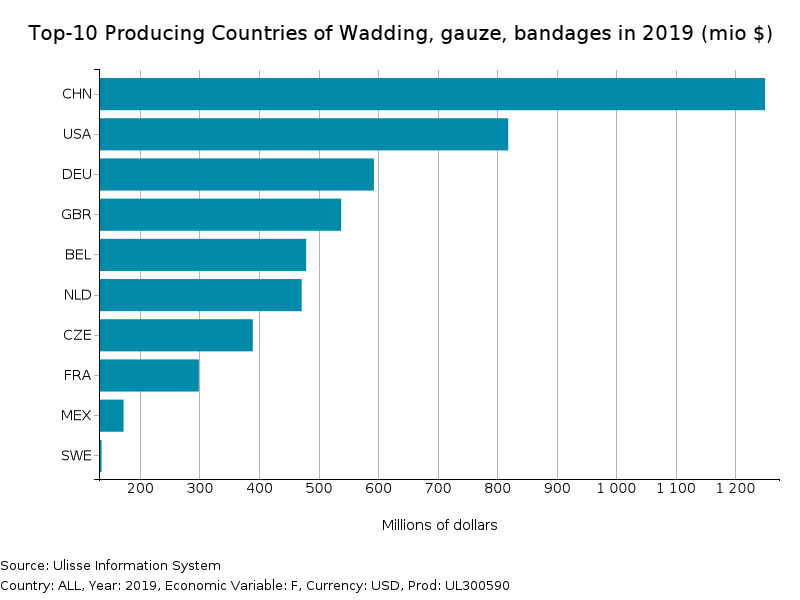 As regards Tissue products5, the analysis of the producing countries in the industry (see the graph below) shows the first place of China, with a 2019 production value of 7.2 billion US Dollars, ahead of US (5.7 billion USD), Germany(4.5 bn USD) and Italy (2.5 bn USD).
There are also other European countries in the top-10 of the producing countries, such as Poland (2.3 billion USD), France, Belgium and the Netherlands. 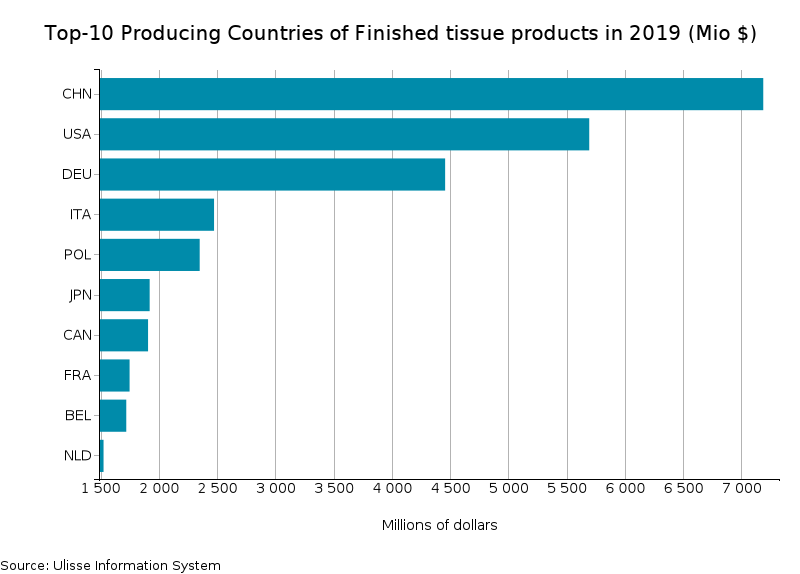 Last but not the least, as regards air filtration, the analysis of Air Filters producing countries (see graph below) reports the The United States in first place for 2019 production value (with 866 million US Dollars), preceding - in order - China (454 mio USD), Belgium (429 mio USD), Germany (426 mio USD) and Mexico (340 mio USD).
There are also other European countries in the top-10 of the producing countries: France, United Kingdom, Poland and Czech Republic. 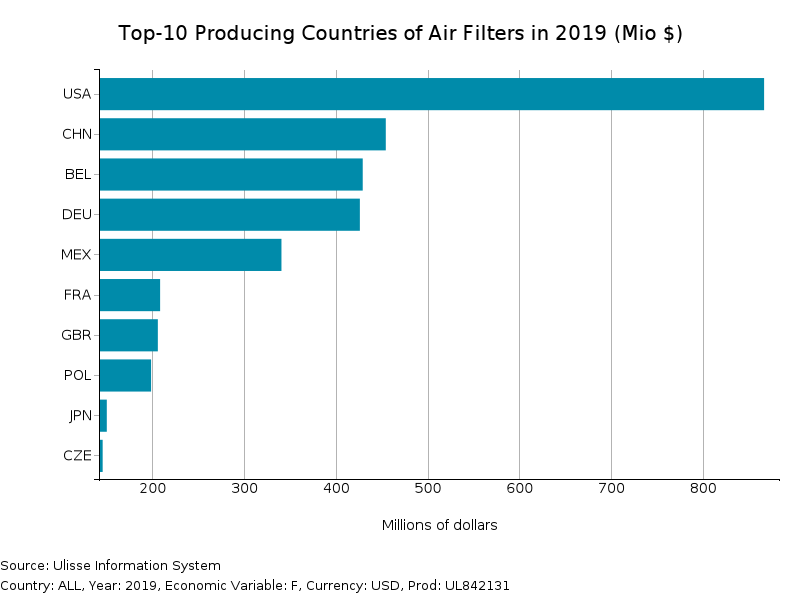 The joint use of information on Technical Textiles' applications and machinery demand for the selection
of priority markets for textile machinery producers.

The analysis of the business areas of Technical Textiles' applications can support technology providers to assess the relevance and the characteristics of textile machinery demand (in terms of imports, apparent consumption, segmentation by price range, positioning competitors, forecast), to be able to better plan the restart phase of the international economy, once the current health emergency has normalized.

1) This segment is represented by a wide range of products, the main goods of which are non-woven fabrics and impregnated, coated or covered fabrics obtained by processes other than weaving and knitting, such as resin-coated fabrics, glass fibre, TPU and PVC.

2) The data and graphs reported in the article, from source Sistema Informativo Ulisse, are taken from the portal ExportPlanning-Acimit, as a service reserved for Acimit member companies.

3) The following are also relevant business areas in terms of Technical Textiles' applications:

In Q1-2022 U.S. market demand for Machinery continued to grow at an accelerated pace [ Read all ]

The transformation of the Russian food supply chain

Since the early years of the 21st century, a change of trend in the agri-food sector has been taking place in Russia [ Read all ]