The dollar is hanging in there, even if the US economy is starting to feel the pinch of the Covid crisis.

This week, one of the main issues in economic and financial debate is the strength of the dollar, again. After last week's slight weakening, the greenback has in fact shown a partial recovery, as can be seen from the chart below. 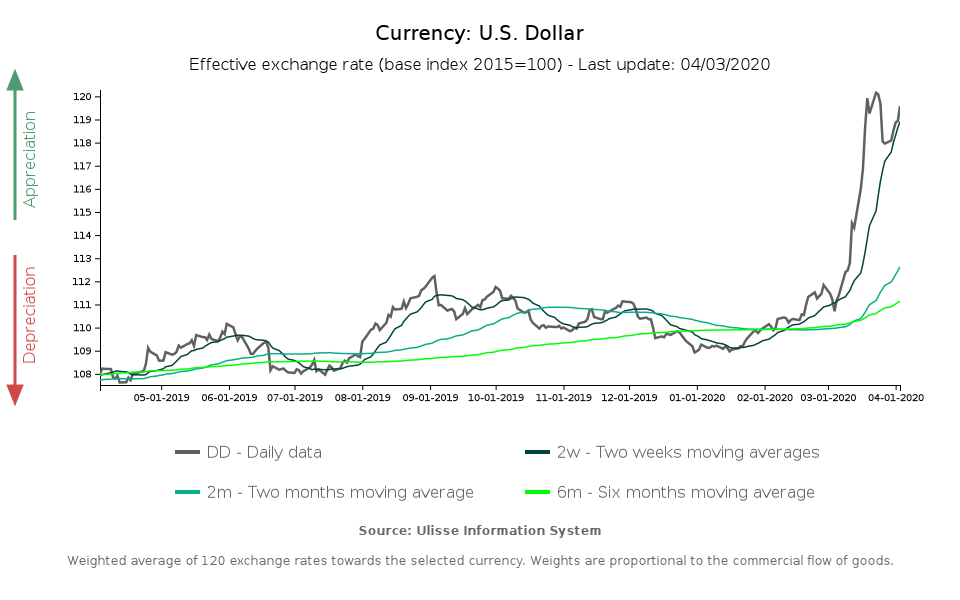 According to analysts, this recovery can be attributed to two main factors:

After "pandemic", it is now "recession" the word that arouses the most fear these days. Several institutions have begun to release forecasts of significant and widespread GDP contraction: Fitch, for example, forecasts a decline in global economic activity close to 2% in 2020. A collapse of more than 3% is forecast for the US, more than 4% for the Eurozone. In times of crisis, countercyclical currencies traditionally perform well: first and foremost the dollar, but also the euro, Swiss franc and Japanese yen, which in fact remain at multi-year highs.

In particular, the greenback is proving strong even in the face of a national economic scenario which, as expected, is beginning to deteriorate. No good news on the employment front: in the second half of March, about 10 million American workers applied for unemployment benefits, of which more than 6.6 million in the last week of the month. These values represent historic highs, according to the US Department of Labor.

For the near future, a possible retreat of the dollar is expected in the face of two hypothetical scenarios:

As mentioned above, recent oil price rebound may also have helped to lift the dollar, as the United States represent one of the world's largest oil exporters.
A downward trend in oil prices started at the end of February, due on the one hand to concerns about the coronavirus-driven fall in demand and, on the other, to the price war between Russia and Saudi Arabia. The combined effect of these factors pushed oil prices to historic lows, levels never reached even during the 2008 financial crisis. On March 30, the WTI hit $20.09 a barrel, while the Brent hit the $24.74 trough the next day. In both cases, in the following days a recovery took place, amounting to about 30%.
This early April rebound is attributable to signs of thaw from US President Trump, according to whom Russia and Saudi Arabia may be close to an agreement to end the price war. The news was enough to raise the price of oil and to sustain a slight rebound, not just for the dollar, but also for the currencies of other oil exporting countries, such as the Canadian dollar and the Norwegian krone. 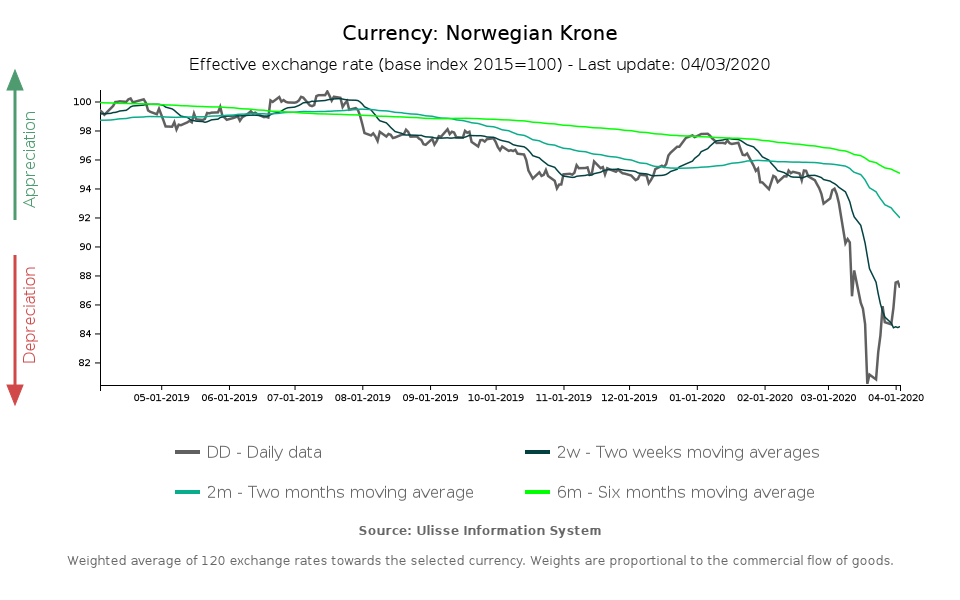 In particular, the Norwegian krone has recovered 3% of its value in terms of effective exchange rate. But it is not just a oil effect: various expansionary monetary policy measures adopted by the Norges Bank at the end of March, as well as fiscal policy measures adopted by the government to support the economy in the fight against the virus, have contributed to the rebound.