Will the global demand crisis be V, U or L-shaped?

The dynamics of Chinese foreign trade in the first three months of 2020 may give some insights.

Europe has entered the "dance" phase of this health crisis. Without lowering our guard on the health front, the attention is increasingly shifting towards economic issues. Each economy is the subject of specific studies aimed at understanding the shape and intensity of its cycle.
There are many factors that link the economic cycles of one country to those of other countries. Among these, the most important one is world demand, which is the sum of all the trade in goods between all the countries of the world. It is not excessive to say that the shape that the economic cycle of a single country will have in 2020 will be strongly influenced by the shape that the world demand cycle will have.

Two cycles in this century

In this century, world demand has basically undergone two phases of crisis. The first began in the first quarter of 2001 and lasted a total of 8 quarters. It is considered a V-shaped crisis, with a downturn lasting 4 quarters and an equally long growth phase, necessary to return to pre-crisis levels. The second crisis started in the second quarter of 2008, with a slight decline at the beginning and a dramatic collapse in the aftermath of the bankruptcy of Lehman Brothers on 15 September 2008. The downturn lasted 5 quarters. The growth phase, necessary to return to pre-crisis levels, lasted 9 quarters, bringing the total length of the cycle to 14 quarters, with a shape that more closely resembles an "L". In terms of intensity, measured as the distance between the highest and lowest point, the 2001 cycle fell by 6% in volume; the 2008-2009 cycle by 18%.

It is useful to note that the 2020 cycle, caused by the health emergency that began in January in China and then spread worldwide, overlaps with a negative cycle that began in the summer of 2018 due to the trade war started by the Trump administration. World demand in volume terms peaked in the third quarter of 2018, followed by a phase of great uncertainty in which the factors supporting world trade, linked to the growth of the world economy, were more than offset by the effects of the protectionist policy implemented by the United States.

The information about the first three months of the year

As the statistical offices of the various countries of the world publish their foreign trade monthly data, it is possible to build a picture that will gradually allow us to understand whether this crisis will tend to take the V-shape of the 2001 crisis or the L-shape of the 2008-2009 crisis.
As the most intense phase of the health crisis has been overtaken by China by the end of March, China's foreign trade figures are fundamental in building the picture of this crisis. Unfortunately, China has not published the January data, and in February it published the aggregated January-February data. This prevents from reading in the continuum the evolution of China's trade, using declarations from Chinese companies. However, it is possible to use the declarations of China's partner countries. Chinese exports are in fact declared as exports by Chinese enterprises, but also as imports from China in the declarations of the enterprises of the partner countries. The same applies to flows in the opposite direction, from partner countries to China.
The following two graphs show the trend changes in Chinese exports and imports, as a result of mirror declarations by partner countries. 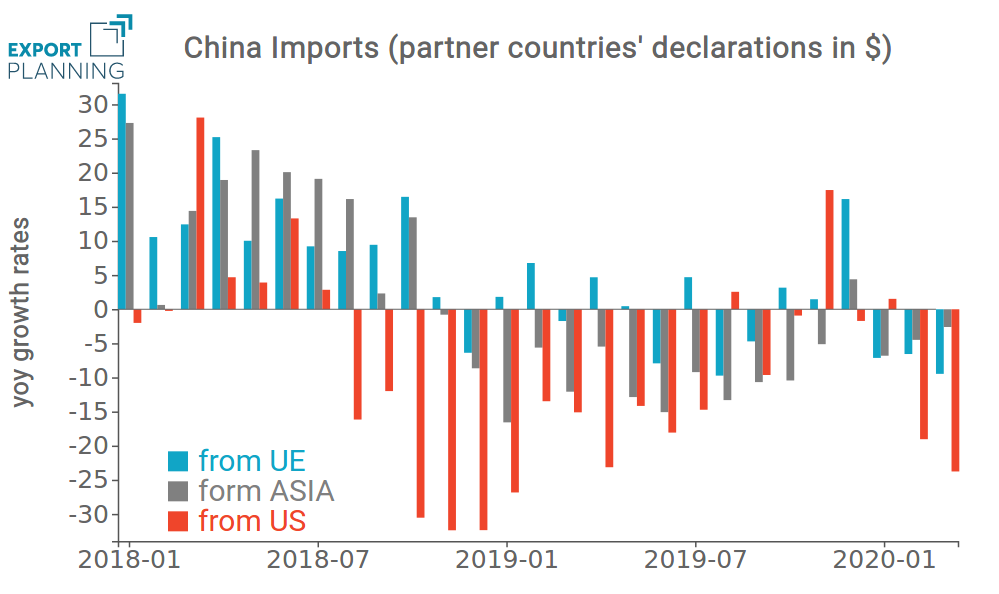 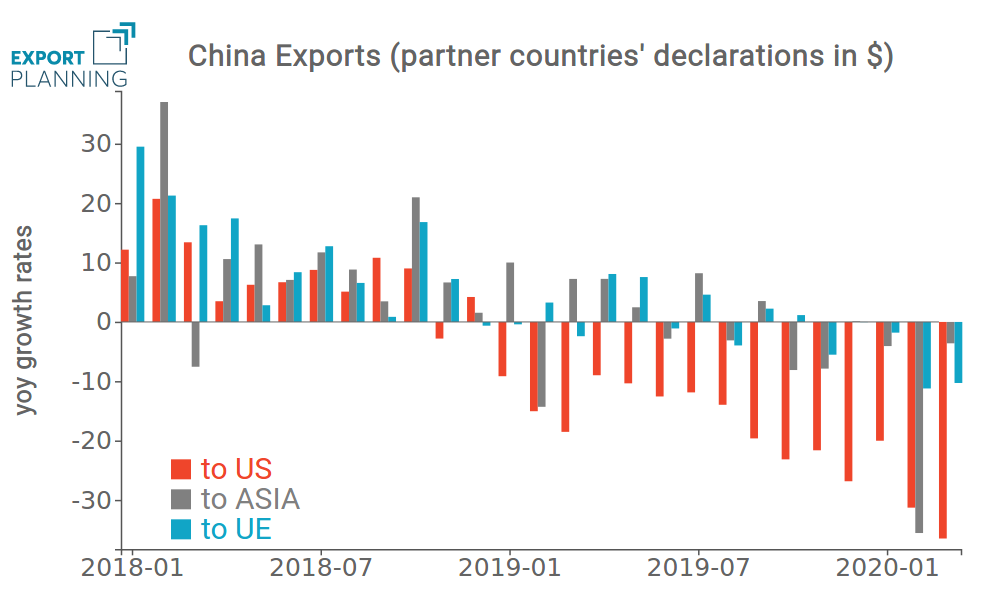 From the analysis of these two graphs, some important facts can be noticed:

The analysis of Chinese trade flows in the first three months of the year highlights the possibility that the effect on world demand of the restrictions imposed to contain the Sars-Cov-2 epidemic may quickly fade once they are removed. From this point of view, the current cycle appears to be V-shaped. However, the time lag of the evolution of the epidemic in the world and the resulting restrictions will widen the basis of the "V", through the effects of transmission of the respective economic difficulties between countries.
The negative effects on world trade of the lockdowns are compounded by the continuation and accentuation of the protectionist policy started by the Trump administration in the second half of 2018.