The Airbus-Boeing Saga and the Transatlantic Dispute

A year after the US tariff imposition, the European Union also hits 4 billion worth of American products. Which ones?

The saga of the transatlantic trade dispute between the European Union and the United States because of the Boeing-Airbus judicial affair continues. After a 15-year trial, last year the WTO authorized the United States to apply countermeasures against $7.5 billion (per year) of imported goods from the European Union. Moreover, through the mechanism of the carousel retaliation, the amount and the type of goods affected are reviewed by the United States on a regular basis, helping to create a climate of uncertainty and thus maximizing the effect of tariffs.
About a year later, in particular last October 26, in a judicial case parallel to the first one, the WTO authorized the European Union to introduce tariff measures as well, for a total amount of $4 billion (€3.4 billion) on US products, as compensation for illegal subsidies granted to the Boeing company by the United States.

The decision came on the eve of the US elections, which at first suggested a wait-and-see attitude on the part of the European Union, according to the new trade policy strategies of President-elect Joe Biden. A few days later, however, the Executive Vice President of the European Commission Valdis Dombrovskis made it known that, although the path of dialogue was the one initially preferred, based on the current circumstances, the EU decided to assert its right and impose the penalties sanctioned by the WTO on American products. The tariffs came into effect last November 10, affecting several US goods, based on what was published on the European Official Journal website (see link).

The products made in US included in the list of Brussels

In defining the list of American products subject to tariffs, the European Union has followed a punitive logic mirroring the one adopted last year by its American partner, hitting the aircraft industry with 15% duty and a wider basket of US goods with extra-duties of 25%. Net of the aviation sector, the most affected American products are shown in the graph below. 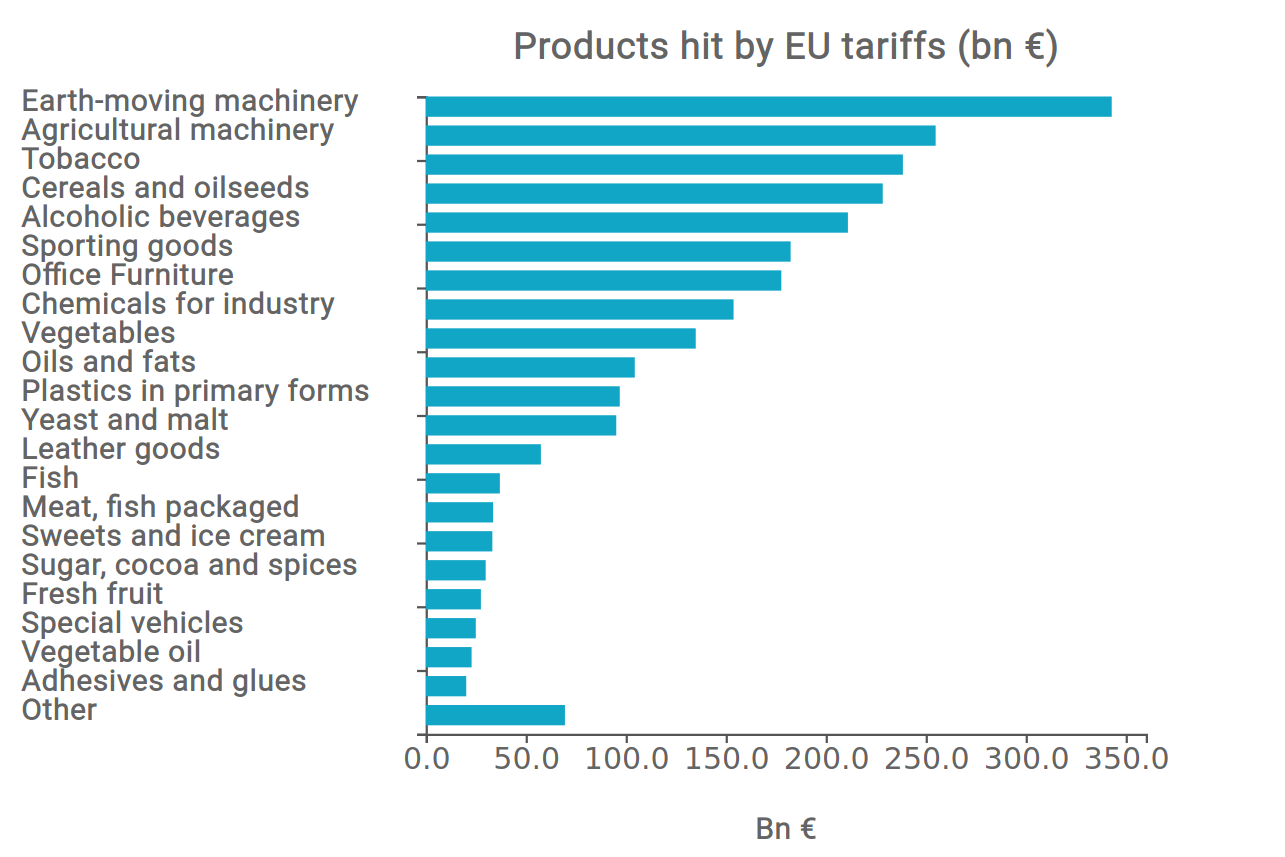 Based on what decided last year by the US administration (for further details see the article "USA-EU: new front of the trade war?"), the new EU tariff measure affects especially American exports of Agri-business products, together with the Agricultural and earthmoving machinery sectors and Personal goods, for the duties imposed on sports articles and leather.

The agro-food industry is by far one of the sectors most affected by the European measures. EU duties affect about €470 million of US exports of tobacco, peanuts and wheat, a total value of €347 million of vegetables (potatoes), malt and fish fillets (salmon).
In these sectors the United States do not have a market leadership in the European market, thus being more exposed to a possible distorting effect of tariffs.
For the packaged food sector, on the other hand, the tariffs impact on about €413 million worth of products, affecting alcoholic beverages and spirits - especially vodka, rum and vermouth.
For these products, the positioning of the American partner on the European market is more robust: e.g. in the case of rum, the United States is the first trading partner of the EU.

On the mechanical front, EU tariffs affect a total of about €623 million, including agricultural tractors and some categories of earthmoving equipment. For these products, the United States is the third largest trading partner on the EU market, competing with several EU member countries, which could benefit from a downsizing of the US presence.

For Personal goods, EU duties impact especially on fitness equipment and leather goods, for a total value of €240 million.
Also in the case of fitness equipment, the United States is among the top 10 trading partners of the European Union. However, in the presence of an increase in demand for these items in recent quarters, the US partner's export performance has been weak, in contrast to the Chinese partner.

Although, for the moment, the transatlantic tariff front seems to be widening, some timid positive signals for the US-EU dialogue have emerged in recent days. Last November 18, the European Council supported a tariff package of reciprocal concessions, abolishing the customs duties currently in place on certain crustaceans and electronic cigarettes, in order to improve transatlantic trade relations. The resumption of dialogue and a strengthening of Washington-Brussels relations are in fact increasingly desirable actions in the face of a possible new international geo-economic configuration, especially following the signing of the Regional Comprehensive Economic Partnership.