Focus on the Eurozone, Turkey and Brazil

It has been quite a busy week for central banks around the world, which have faced a long schedule of meetings. Below we document some of these sessions, setting monetary policy decisions in the respective macroeconomic and currency context.

Of primary interest is the policy line adopted by the Frankfurt institution, speaking as one for the whole Eurozone. In terms of interest rates and programmes currently in place (Asset Purchase Programme, Pandemic Emergency Purchase Programme, targeted longer-term refinancing operations), yesterday's meeting essentially confirmed what was reported at the December session. Indeed, ample monetary stimulus remains essential to grant favourable financing conditions to the real economy, in a context marked by:

Risks continue to be on the downside but, compared to the previous assessment in December, they apprear less pronounced, thanks to elements such as the start of the vaccination campaign in Europe and the agreement between the EU and the UK on Brexit, which removes a good amount of uncertainty from the outlook.

During President Lagarde's press conference, particular attention was paid to the comments on the still hot topic of the appreciation of the single currency. In line with the conference of last December, it was reiterated that "we are monitoring exchange rates very carefully" and that "we (the central bank) are very attentive": the ECB thus reiterated the message that it is alert and ready to act with all the instruments at its disposal, to prevent the exchange rate dynamics from worsening the medium-term inflation outlook.

The latest data on the euro-dollar exchange rate, which closed the week at 1.22, suggests that these levels are certainly worth monitoring, as they represent a 3-year high, but at the same time they show that the euro has lost some ground in recent weeks; therefore, the situation does not seem to require immediate action. Markets expect the ECB's action to remain just verbal for the time being. 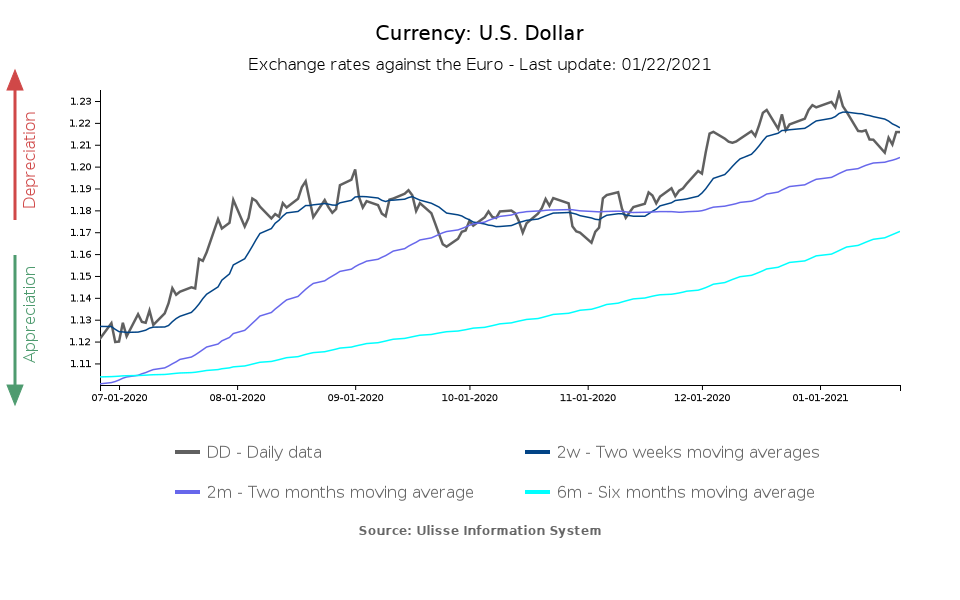 Another monetary policy meeting worthy of particular attention for its currency implications was the one held yesterday by the Turkish central bank.
In November, Turkey underwent a significant change of course in economic leadership, leading the country towards more orthodox monetary policies, needed to cope with the lira's depreciation. The central bank's first actions respected the announcements of change and break with the past: in November, the central bank raised its benchmark interest rate by 475 basis points, and by further 200 basis points in December.
This new course exerted positive effects on the lira, which recovered more than 13% of its value to date since its maximum depreciation against the dollar in early November. 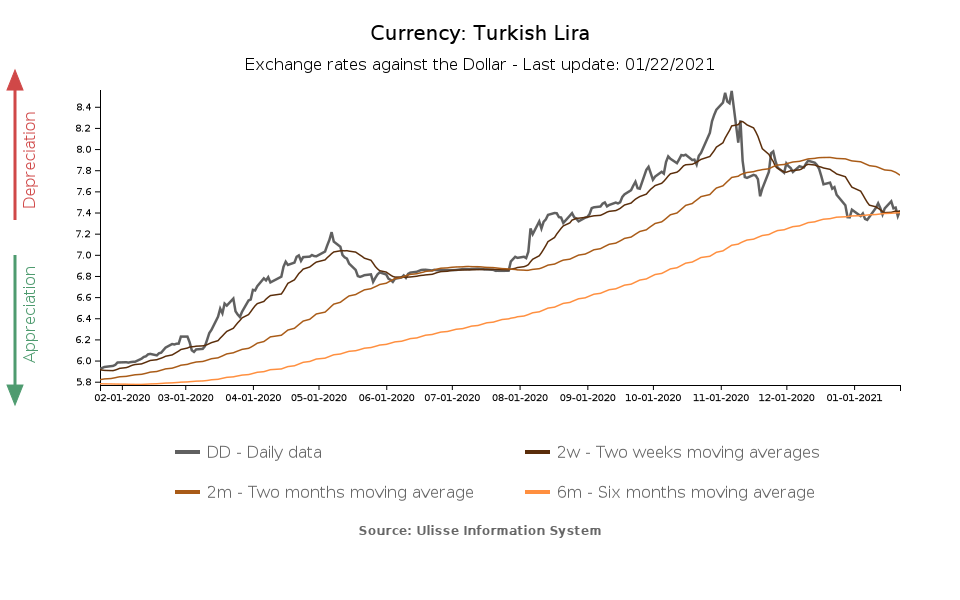 The first meeting of the country's Monetary Policy Committee in 2021 was therefore a test for Turkey, which is being closely watched by the markets to see whether its commitment to maintain a restrictive stance would be respected. The committee decided to leave the key rate unchanged at 17%. At the meeting led by the new governor Naci Ağbal it was also stated that this restrictive monetary policy approach will be maintained as long as indicators suggest falling inflation and stable prices.

On Wednesday, the meeting of the Banco Central do Brasil's monetary policy committee (Copom) took place. Here too, the reference rate, the Selic, was left unchanged; in contrast to the Turkish case, however, the Brazilian reference rate is at 2%, an all-time low, in line with the generally accommodative approach adopted by most of the world's central banks in the face of the Covid crisis.

An element that attracted particular attention to the Brazilian central bank's monetary policy statements was the decision to eliminate forward guidance, introduced in August (i.e. the commitment to maintain low interest rates over an indefinite time span). This decision is linked to the dynamics of inflation, which has shown a greater acceleration than expected in recent months, in connection with the rise in commodity prices and their effects on food and fuel prices.
Although the removal of forward guidance does not mechanically imply a rate increase, in the face of an emergency situation that still requires monetary stimulus, the Brazilian central bank, looking at the objective of price stability, is therefore preparing in its toolbox the possibility of normalisation.