One of the most significant inheritances of the current economic crisis caused by the Covid-19 pandemic on the recovery of international trade is perhaps the strong heterogeneity that is currently characterising the recovery framework of different industries and geographical areas.
The article EU foreign trade: the final figures for 2020 documented how the different speed of demand recovery in the EU's main trading partners has led to a rather heterogeneous performance in the different target areas. 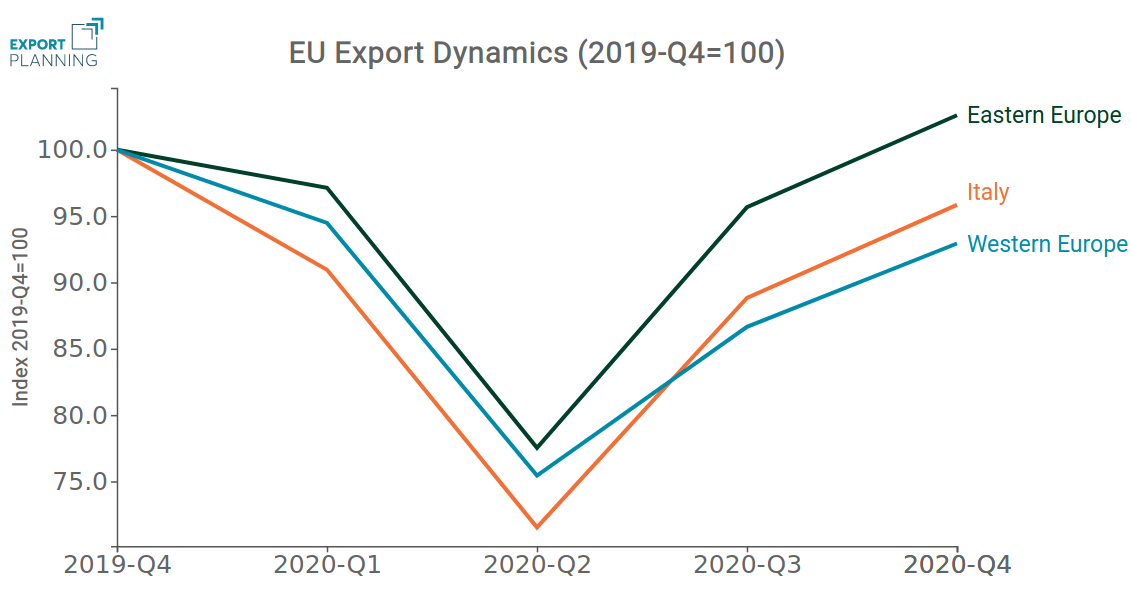 Against this backdrop, it is particularly interesting to note that Italy's export performance is roughly in the middle between the two areas under scrutiny. Italy's export recovery is in fact more marked than that of its region and highlights the good responsiveness that characterised Italian exporting companies during the recovery phase.

On the European landscape, Central and Eastern European countries have therefore emerged in terms of greater resilience to the negative effects of the current crisis. In order to investigate the results from a sectoral perspective, the following graph shows the main export industries in the area under analysis. The map positions the industries according to the overall rate of change recorded for 2020 (X-axis) and the YoY rate of change recorded in Q4 (Y-axis); the width of each ball is proportional to the 2019 value of exports.

Firstly, it is important to note that most of the region's export macro-sectors are above the grey line, confirming the strong intensity of their recovery in the latter part of the year. In fact, the Q4-2020 recovery concerns almost the entire consumer goods and investment goods cluster.

Particularly significant is the recovery of the automotive sector, which involves both the transport equipment (F3) and components (D3) sectors. The industry has been one of the hardest hit by the current economic situation: despite a positive performance in the fourth quarter, exports from the sector ended 2020 largely in negative territory, with a drop of around 10%. At the same time, however, the result stands out for its greater resilience compared to the performance of the European automotive industry, which on the export front showed a drop of 18%, according to preliminary data for 2020.

On the consumer goods front, the Finished Personal Products (E2) sector, another industry deeply affected by the negative effects of the crisis, also held up well. Exports from Central and Eastern Europe closed 2020 with a weak contraction of 1.8%, compared to a 13% drop for the EU average.
Exports of those macro-sectors that proved most resilient to the current recessionary context closed 2020 in positive territory: the agri-food sector (B1 and E0), the Health System (E4) and ICT Tools and Services (F1), which respond to new international consumption trends.