Among emerging economies, South Africa has been characterised by particularly high nominal and real 10-year interest rates in the last two years.
Last spring, at the peak of the health crisis, South African rates exceeded 12% for a few days, while Brazilian rates remained below the double-digit threshold and Russian rates did not exceeding 8%. In the following months, as financial markets gradually absorbed the shock of the first wave of contagion, the interest rates on South African bonds dropped below 10%, stabilising at around 9%, but maintaining a spread over Brazilian and Russian rates averaging more than 200 basis points.

Given this situation, the South African rand has been the currency that financial markets have turned to over the past year, whenever improvements on the pandemic side or signs of recovery in the world economy have led to an increase in risk appetite.
The effect has been a gradual strengthening of the rand.
The following graph compares the exchange rates of the Rand, Ruble and Real against the dollar, given at index 2020=100, to better visualise their relative dynamics.

The graph shows the different dynamics of the Rand and its marked appreciation, notably:

This long appreciation phase has led the rand to remain below the 14.5 rand per dollar this week (see the graph below). 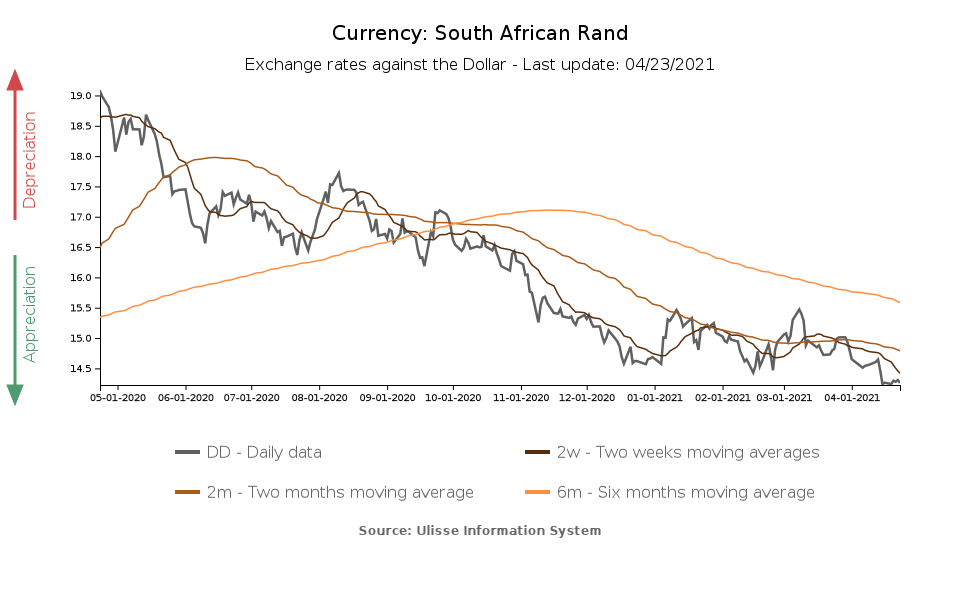 In this context, the exchange rate of the rand against the dollar has become an indirect indicator of the risk appetite/aversion of financial markets: when it appreciates (and thus the Rands needed to buy a dollar are reduced), it is a sign that global financial operators are becoming less risk-averse. Conversely, when it depreciates.