The strength that the Israeli currency, the shekel, holds in the international landscape, is currently well known. Specifically in the last few years, the currency has always managed to maintain its resilience on forex markets, despite the cyclical re-emergence of the Arab-Israeli conflict1 and a political stalemate that lasted two years; during this period, four general elections were necessary to arrive, last June, at the formation of the new executive led by Naftali Bennett.

Looking at the effective exchange rate of the last year, after the fall experienced in January, a progressive strengthening trend can be noticed: this dynamics has brought the shekel to exceed, in the current month, the high levels of the beginning of the year. 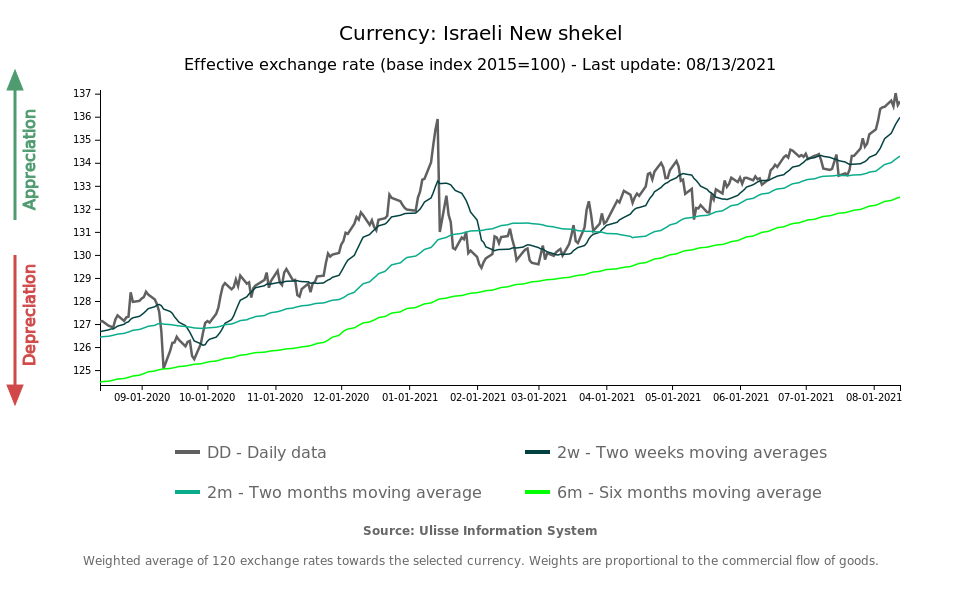 Looking instead at bilateral exchange rates, in recent days the Israeli currency has newly strengthened against the euro, surpassing the highs of last January; on the contrary, we can find a weakening against the dollar, related to the bull trend of the greenback.

As reported in a previous article, in recent months the excessive tendency of the currency to appreciate had already alarmed the Bank of Israel (BOI) which, with the aim of counterbalancing this strengthening, had launched in January a new phase of foreign currency purchases amounting to $30 billion over the year. Despite the fact that the central bank's move had an immediate impact on currency markets, the structural tendency of the shekel to appreciate progressively re-emerged in the following months.
After purchasing, in the first six months of 2021, more than 80% of the stock announced at the beginning of the year, in July the Bank of Israel's monthly purchases drastically dropped to $500 million - an element that partly explains the significant strengthening of the effective exchange rate during the last few weeks (+2.2% between the end of July and mid-August).

As can be seen from the chart above, the acceleration in the growth path of Israeli foreign exchange reserves began as early as 2020; according to statements from the central bank , last July the threshold of $201 billion was exceeded. In the face of interest rates still low and maintained at 0.1%, it is clear that intervention on FX markets appears to be the primary method to curb the appreciation of the shekel.

Despite legitimate concerns about the impact that the strengthening of the currency could have on exports and the country's economy, according to IMF forecasts (World Economic Outlook, April 2021), the Israeli current account balance should continue to remain in positive territory in the coming years: although slightly down from the 4.9% reported for 2020, it is expected to reach 4.1% in 2021. As for gross domestic product, the IMF forecasts a growth of 5% for the current year, which would therefore lead to a more than complete recovery compared to the 2.4% fall recorded in 2020.

World trade in goods ended the year with 4% growth on pre-crisis levels, but the slowdown continues [ Read all ]