The Israeli shekel, well known for its status of strong currency, was not spared by the Covid crisis: its exchange rate against the dollar weakened significantly in March, in line with the trend observed for many world currencies; it then gradually recovered ground in the following months and stabilised around pre-Covid levels.
At the beginning of November, however, the currency's stability gave way to a new phase of sustained strengthening against the dollar, which led the exchange rate to exceed its pre-crisis values. Between the beginning of November and yesterday, the Israeli currency strengthened by more than 8 percentage points against the greenback; in the first 14 days of 2021 alone, the shekel strengthened by 2.2%. Nonetheless, the trend was abruptly reversed today, with the shekel's exchange rate against the dollar returning, within a day, to levels last seen in early December.

The events. The developments that can explain the recent dynamics of the shekel are linked to the actions of the country's central bank, which delivered a strong message to financial markets yesterday.
In the last few days, the exchange rate of the shekel against the dollar reached an all-time high: until yesterday the Israeli currency was at its highest level in 24 years. This situation prompted the central bank to take action, or rather, to announce action, "to provide the market with certainty regarding the Bank’s commitment to dealing with the recent sharp appreciation". Yesterday, the Bank of Israel announced that it will make foreign currency purchases amounting to $30 billion during 2021, in an attempt to "moderate the negative effect of the shekel’s appreciation on Israeli economic activity during the coronavirus crisis". The excessive appreciation of the currency poses risks for the normalisation of inflationary dynamics, as well as for export-oriented sectors.
According to the central bank's statements, purchases will continue for as long as is deemed necessary to stabilise prices and achieve the broader objectives of financial stability.
With key interest rates already close to zero, intervention on forex markets appears to be the central bank's reference method to try to contain the shekel's appreciation.

Although lower than what planned for 2021, the Bank of Israel's foreign exchange purchases last year were also significant, totalling $21.2 billion. Nonetheless, they do not seem to have been sufficient to effectively curb the shekel's appreciation, particularly in recent months.
The institution's monetary policy choices are clearly reflected by the data on Israeli international reserves, which experienced a significant growth during 2020. 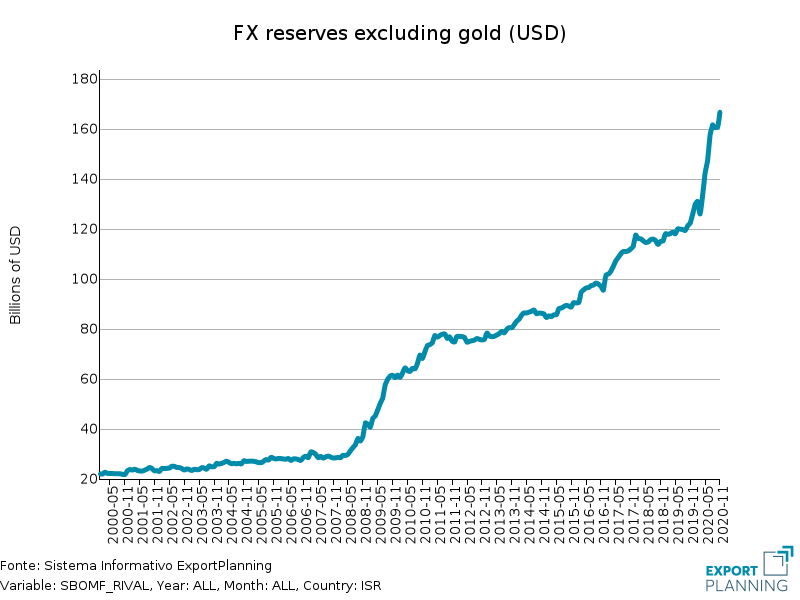 The reasons. The factors identified by the central bank behind the recent strengthening dynamics of the currency can be summarised as follows:

The reaction. The central bank's move had an immediate impact on currency markets: today alone, the shekel lost 3.8% against the dollar, from 3.14 to 3.26. Although the factors behind the appreciation are mainly structural, the Bank of Israel's resolute action to counter this trend must have proved highly credible in the eyes of the markets.

In the lighting segment, Italy and Germany do not catch the positive phase of Global Demand [ Read all ]