In these two years of pandemic, Italy has seen its international reputation grow due to its ability to fight the economic and health crisis from all points of view. The 2021 prestimate of the annual ExportPlanning database gives Italy another reason to be proud. With 475 billion euros of exported goods Italy will surpass France this year, standing at 456 billion.
The following graph illustrates how such result was obtained. It shows, for each month since 1989, the cumulative function for the last 12 months. 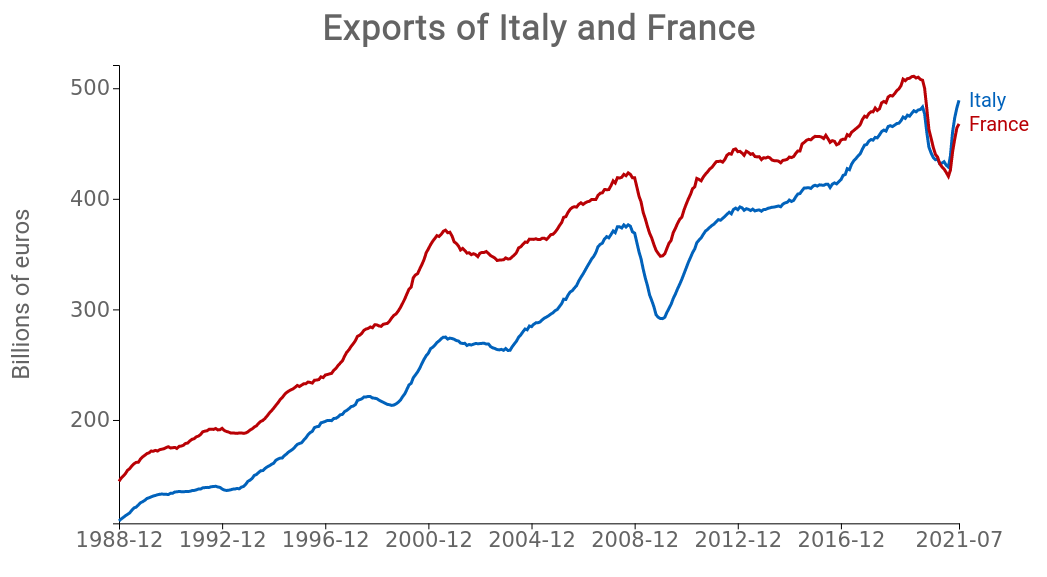 Over the last century, Italy has always exported less than France, with an average gap close to 25%. With the recovery of 2004, mainly driven by global demand, this gap began to decrease, falling below 10% in the aftermath of the bankruptcy of Lehman Brothers on September 15 2008, coinciding with the beginning of the great recession. In the course of the crisis and subsequent recovery, the gap narrowed only slightly, until March 2020, when the freeze on manufacturing activities caused exports from both countries to plummet. French ones collapsed the most, signaling less resilience of the French manufacturing system to the anti-covid rules. The year 2020 closed with exports essentially balanced, for both countries close to 430 billion euros. It was in the recovery phase of this year that the greater flexibility of Italian industry allowed the overtaking and subsequent lengthening.

Many factors underlie this result. An initial analysis can be made by comparing the change in exports between the first 9 months of 2021 and the corresponding period in 2019, of Italy and France. These two industry-level measures are shown in the scatterball below. The bisector is also drawn in the graph. It allows us to highlight those industries in which Italian exports have increased more than French exports (positioned above the bisector), distinguishing them from the cases in which French exports have increased more than Italian exports.

Analysis of the data allows us to highlight some facts:

What emerges from this analysis are two fundamental factors: first of all, the Automotive industry reflects French weakness (rather than Italian strength), even in this period of strong economic recovery; finally, the sectors strongly linked to Made in Italy are driving Italian exports, mainly thanks to the flexibility of making the most from moments of radical change.

With 51.7 million consumers and a high-spending middle class, South Korea is rightfully among the most attractive markets for wine exports in Asia [ Read all ]