One of the markets with the highest potential for European agro-food exports is undoubtedly China, which in recent years has grown a great deal and has progressively expanded the recognition of EU Geographical Indications. Over the years, relations between the two areas have been strengthened and have led to the ratification of an agreement for the mutual recognition, by 2021, of 100 geographical indications. It is well known that both Italy and its transalpine cousins make the agri-food industry the flagship of their exports, however, the two countries enjoy a completely different positioning on the Chinese market.

As widely documented in the article The importance of the distribution network as a driver of export growth, since the beginning of the century, the French large-scale retail trade has invested a lot in the Chinese market, bringing its products to be more widespread and recognized in the country of the dragon. On the contrary, Italy has moved with more delay and seems to have been penalized by the presence of the French large-scale retail trade, not intercepting as well the Chinese demand for agricultural and food products.
The Italian market positioning has therefore been largely affected, as shown in the following graph, which highlights the market shares of Italy and France in the last 8 years (cumulative last 4 quarters). 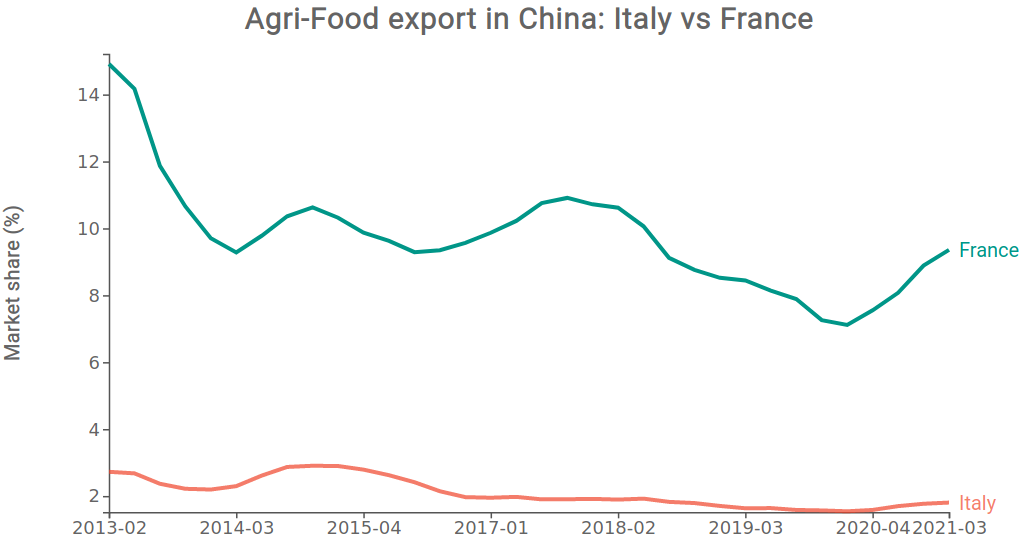 As we can see from the graph, France has a market share of agro-food goods of around 10%, a much higher value than Italy, which is around 2%. As witnessed by what was previously said, the gap shown is very wide, even though it is a sector of excellence for the Belpaese.

The scatterball graph below makes it possible to investigate in which segments there are the greatest differences in terms of the competitive positioning of the two countries, showing on the x-axis the French market share held on average over the last 5 years, and on the y-axis the Italian market share.
The bisector has been drawn in yellow, making it possible to highlight those sectors in which the Italian market share is greater than the French one (the balls are positioned above it), distinguishing them from the opposite cases in which the French market share is greater than the Italian one (the balls are positioned below it). Finally, ball width is proportional to the average between Italian and French exports in 2019 to China.
For the purposes of analysis, another sector that is particularly renowned and prestigious for both countries, namely the fashion system, has also been included in the proposed graph.

From the proposed graph, it is clear that the gap between French and Italian competitive positioning is typical of the agro-food industry and is not found for the fashion system.
We can immediately see that most of the sectors that are part of the food industry are positioned below the bisector, the only exceptions being oils (E0.12) and pasta and rice (E0.15), all typically Italian products. What stands out above all is the enormous gap recorded by the sector of alcoholic beverages (E0.42) dominated by champagne, which leads France to hold a market share of over 30%, compared to Italy, which stands at 4%. The situation is diametrically opposed for the fashion system, in which Italy has a greater market share for most of the sectors taken into consideration. Outwear and footwear stand out above all others, as well as clothing accessories and underwear.

This comparison between Italy and France has highlighted the obvious problems of Italian agri-food exports to China. The Italian distribution network has not been able to develop sufficiently to support the growth of the sector in a market potentially rich in opportunities.
However, the fashion system does not show these difficulties and, in accordance with the trend of Italian exports, especially in the last six months, Italy has managed to maintain its market share above its transalpine rivals in almost all segments, signaling a higher level of recognition of the country's system in this sector.