The ongoing economic diversification from oil&gas, the opening to foreign markets, the reforms of recent years make the country an interesting target market

The United Arab Emirates (UAE) represent one of the most important and dynamic economies in the MENA region. Since its birth in 1971, the country has started a process of economic, social and cultural development with few equals in the Middle East. With Expo 2020 the UAE is, not by chance, the first country in the area to host the Universal Exposition, thus formalizing the pro-active role it holds on the Middle Eastern and on the international economic scene.
The country's growing commitment to diversification of its economy from the oil&gas sector, the greater openness to international markets and the reformist path of recent years have restored the country's solid institutions and increasing confidence among foreign investors. From a macroeconomic point of view, the country's opportunity conditions appear very favorable, compared with a risk profile that, although present, remains at contained levels.

In the pandemic year the UAE experienced a large decline in gross domestic product, amounting to -6.1%, marking a relatively worse performance than the global economic average (-3%). As in other oil-exporting economies, the result also reflects the negative effects on the Emirates economy of oil prices fall recorded in the first part of 2020. 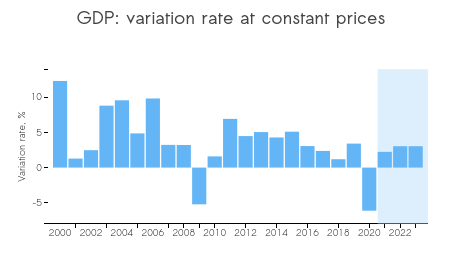 From 2021 the recovery has been sustained by the effective health response to the pandemic (the country is among the first places in the world for fully vaccinated population), expansive fiscal policies, the increase in oil prices and the gradual rebound in tourism thanks to Expo 2020, which began last October.
According to the latest estimates of the IMF, in the next two years the economy of the Arab Emirates will grow by an average of 3%, as Germany. 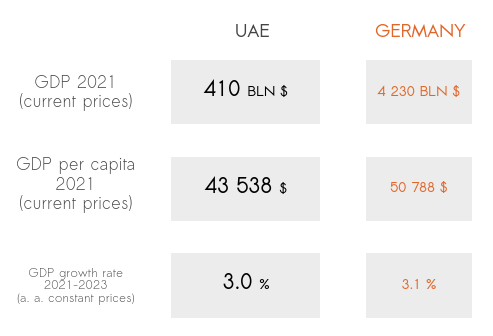 A distinctive element of the economy of the Emirates is the level of per capita income, which is among the highest in the world, comparable to the main Western European nations, and which allows for particularly high standards of living. In fact, the young Emirates population represents a privileged target for the "premium" and luxury sectors.
An economic situation with a positive outlook is also associated with a business environment that is particularly flourishing for international partners and highly attractive thanks to the good quality of local institutions.
According to the latest release of the Index of Economic Freedom, published by The Heritage Foundation, the Emirates are in 14th place in the world ranking, among prevalently free economies with a score of 76.9 (0-100, where 100 is the max of freedom), slightly better than Germany (score of 72.5).
Compared with the German economy, in fact, the UAE is characterized by relatively more effective judicial, fiscal and regulatory systems, although it suffers from less freedom of investment and autonomy of the financial system. 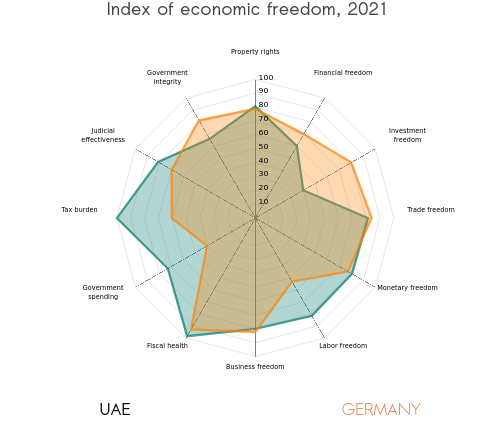 Overall, in recent years, the increasing openness to international markets, in a solid institutional context, has been accompanied by a reform process that has strongly supported foreign direct investment (FDI). The political objectives of economic diversification from oil dependence and the strategic geographical position have led the country to become an "incubator" of globalization. In particular, with a policy of incentives for the creation of free zones, the UAE has become one of the main global commercial hub. Their introduction has not only favored economic development and foreign investment, but has also contributed to attracting the know-how and professionalism that have sustained the economic growth.

The Emirates are the largest trading country in the Middle East. In addition to raw materials, the structure of the country's imports is strongly concentrated in ICT equipment, means of transport (especially cars) and fashion, with a strong incidence of precious. 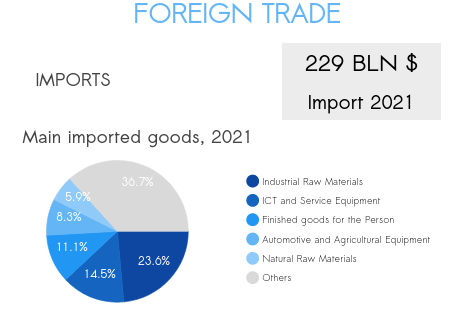 The country's riskiness appears to be very limited, thanks to the institutional quality, political stability and favorable business climate, which are combined with a very low sovereign credit risk. It should be noted, however, that relatively higher is corporate and banking counterparties riskiness, based on SACE (Italian Export Credit Agency) estimates.

Despite significant progress in the economic diversification process, the strong dependence on oil price represents an element of risk, given the vulnerability of the Emirates economy to the energy market fluctuations.
It should also be underlined that an area with great potential, such as the United Arab Emirates, can however present risks if it is not approached with adequate knowledge of the market. Only the joint analysis of opportunities and risks, in relation to the strengths and weaknesses of the company, can constitute an objective reference for deciding whether or not to make this area one's target market.