In the first five months of 2022, the EU trade balance was in negative territory for the first time since the Great Recession

The availability of European foreign trade data, covering the first five months of 20221, allows us to document the significant worsening experienced by the European Union's trade balance, which for the first time since the Great Recession is moving into negative territory for several consecutive quarters. Specifically, the cumulative trade balance (first 5 months of 2022) was in deficit by 90 billion euros, compared with a trend decline of more than 180% compared with the same period last year.

Since the trade balance is defined as the difference between the value of exports and imports of goods at current prices, the result can be attributed to a plurality of factors, which are simultaneously influencing European import and export trends.

Since the end of 2021, the eurozone's trade balance has entered negative territory (see Fig.1).
This result highlights, first and foremost, the vulnerability of the European Union to the increases in commodity prices that are characterizing the current economy. Since November, in fact, the growth of European exports, while positive, has not been sufficient to offset the increases shown by the value of imports, driven mainly by generalized increases in commodity prices, primarily energy prices. 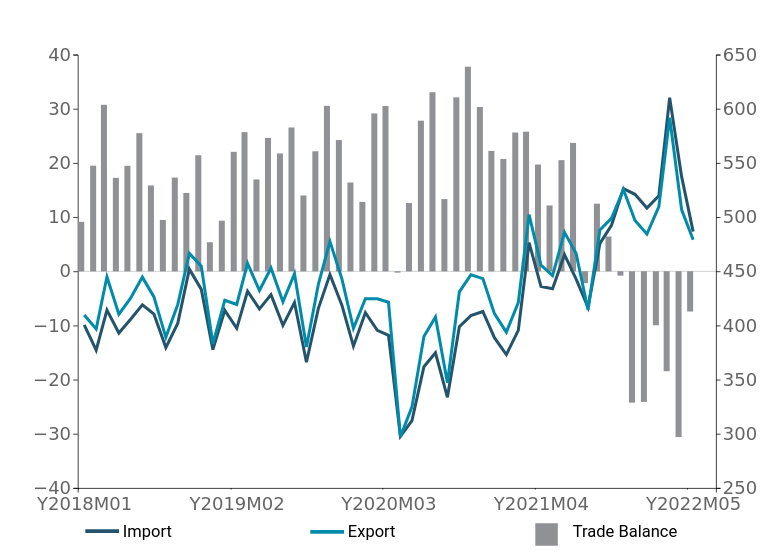 In the early months of the new year, the outbreak of the Russian-Ukrainian war further increased price pressures, especially in the face of Moscow's role in the Old Continent's energy supply. Indeed, in March 2022, European imports from Russia hit an all-time high, even in the face of difficulties in replacing Russian gas supplies with third countries (see Fig.2)2. 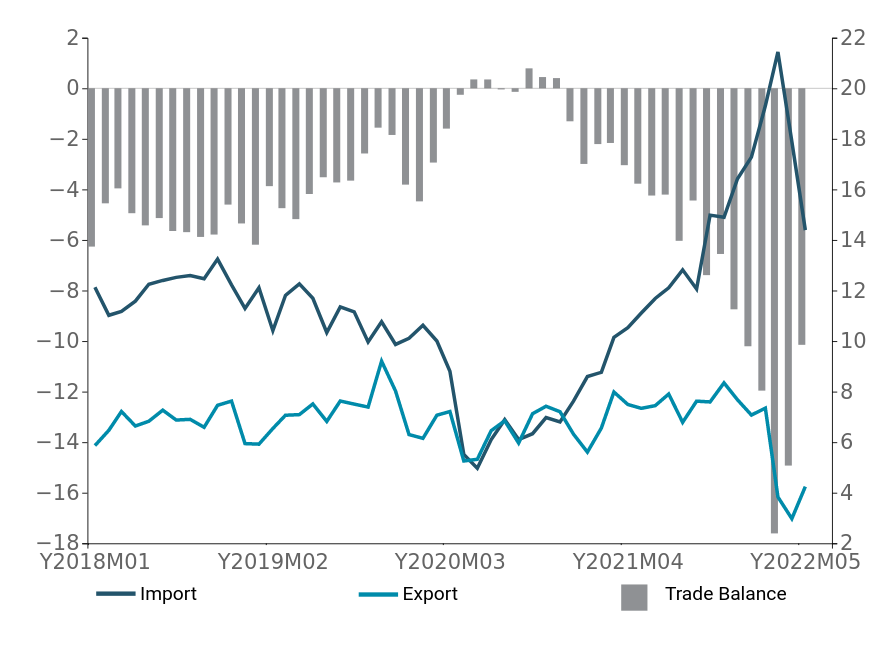 Sanctions toward Russia and Chinese lockdowns

On the export front, on the contrary, the sanctions actions put in place by the allies and restrictive measures on EU exports to the Russian market have led to a significant worsening of the EU-Russia bilateral trade balance. Consider that the Brussels-Moscow trade deficit exceeded 50 billion euros in the first five months of the new year, a 350 percent widening compared to last year.

In addition to Russia, another country has significantly affected the negative balance of European trade: China. In fact, the value of European imports from the country of the Dragon has grown significantly since the second half of 2021, compared with a stable trend in EU exports, which have been partly penalized in recent months by lockdowns affecting strategic cities in China, such as Shanghai and Shenzhen. 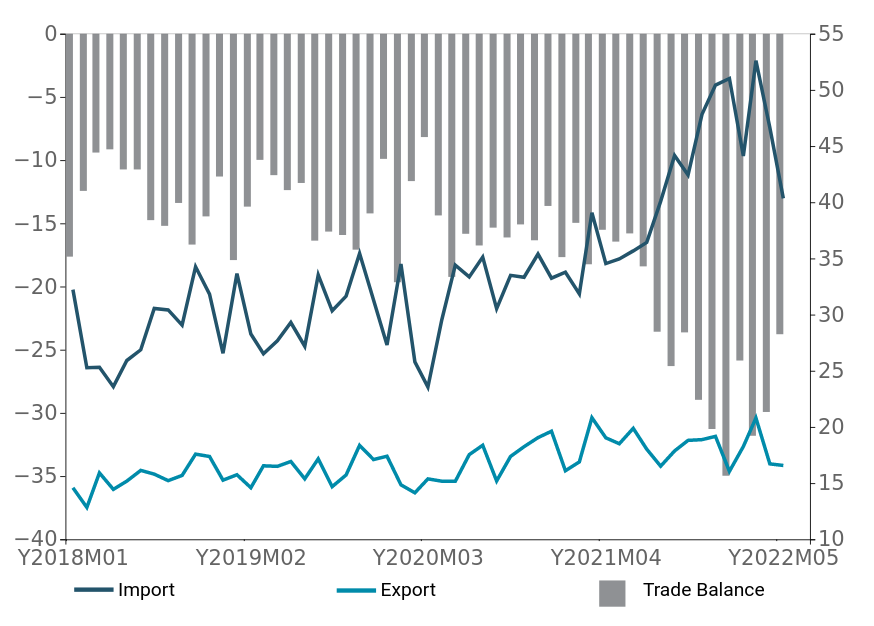 Which member states have seen their trade deficits worsen significantly?

By breaking down the analysis by individual member state, it is possible to document how the worsening of the trade balance in the first five months of 2022 was a phenomenon that was essentially spread across all euro area economies, except for Ireland. One figure that is particularly significant is the deficit recorded by an export-oriented economy such as Italy's. Again, this is a reversal of the sign of the trade balance of recent years, which has generally always been positive, with a trend decline of more than 150 percent compared to the same period last year.

Increases in the cost of raw materials, especially the energy family, persistent inefficiencies along international value chains (primarily Chinese lockdowns) and European sanctions against Russia have led to the negative outcome of the European trade balance in these first five months of the year.
An additional factor to take into account, however, is the evolution of the euro-dollar strength ratios in recent months, which have been characterized by a significant appreciation of the dollar against the euro. This phenomenon certainly has the effect of improving the competitiveness of European products in the world, with the effect of reversing the trend in the European trade balance highlighted in recent months. Within this framework, the element to be monitored will certainly be the evolution of commodity prices during the second half of the year, in order to understand whether "imported" price increases can be more than offset by increased international demand for European commodities.

1. May Intra-EU declarations are pre-stated.
2. The data do, however, allow us to document an increase in the European trade deficit with other supplier countries, such as Norway, Algeria and Azerbaijan, a sign of European attempts to reduce energy dependence on Moscow.