On June 30, 2022, the European Union and New Zealand concluded the four-year negotiations for an ambitious trade agreement

On June 30, 2022, during Prime Minister Jacinda Ardern's visit to Brussels, the European Union and New Zealand reached an agreement, concluding a four-year round of negotiations.
The ambitious trade agreement, which is still awaiting ratification, aims to open up significant economic opportunities for businesses and consumers in the two markets, and includes unprecedented sustainability commitments, including compliance with the Paris Climate Agreement and basic workers' rights.

Indeed, the agreement fits into the broader spectrum of "new generation" agreements signed by the EU, such as CETA between the EU and Canada in September 2017 and the EU-Japan Economic Partnership ratified in February 2019.
The goal at which these agreements aim is to preserve the economic benefits of free trade, while limiting its negative effects, through a "deepening" of the agreement areas.
These are, in fact, not merely limited to the reduction of tariffs and non-tariff barriers, but extend to environmental and civil rights issues, the improvement of working conditions, intellectual property and the protection of geographical indications.

In fact, the new EU-New Zealand arrangement will provide:

Of particular note is also the fact that, according to the European Commission's statement, the full text of the agreement will have a chapter dedicated to facilitating the export of small and medium-sized enterprises.

The European Commissions estimates that the ambitious trade agreement would guarantee an increase of up to 30 percent in bilateral trade between the two areas, thanks to the elimination of tariffs (currently in the range of 5-10 percent). This dynamic would lead to a significant strengthening of the growth momentum of bilateral trade interchange recorded since the Great Recession.

In fact, trade relations between the two geographic areas have intensified over the past few years, especially with regard to European exports to the New Zealand market. Despite the sharp fall marked in the annus horribilis, they fully recovered their pre-pandemic levels in 2021, reaching a record high of around 5.5 billion euros (Fig. 1) and placing themselves along a path of particularly sustained increases. More stable, on the other hand, is the trend of EU imports from New Zealand, which have already been settling at around 2 billion euros for several years. 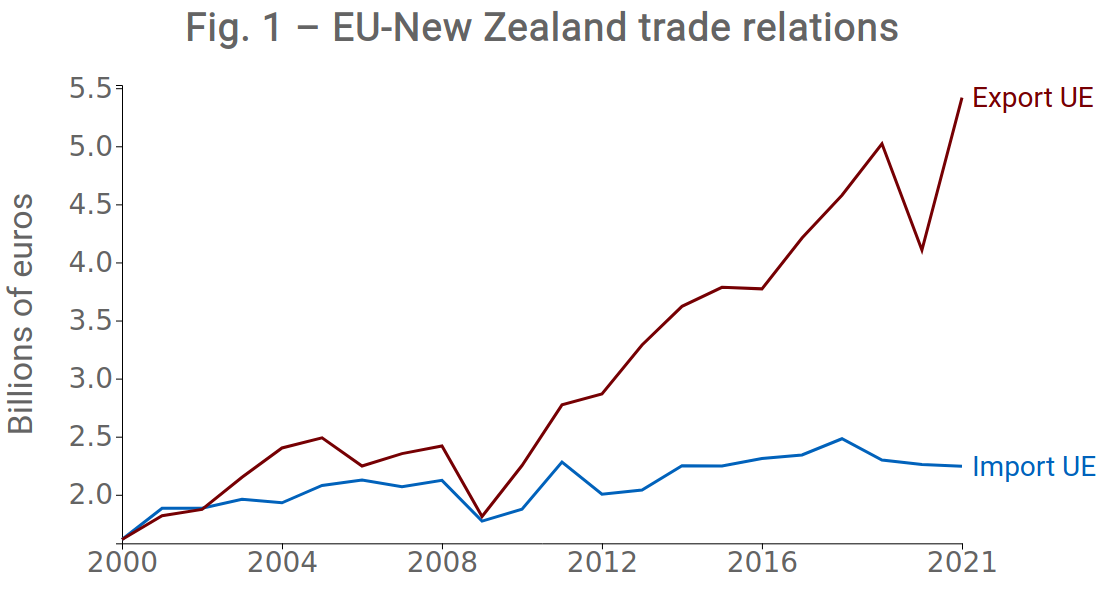 A more in-depth analysis at the sectoral level reveals that the main export sector of the European Union to New Zealand is transport and agricultural equipment, which in 2021 exceeded 1.2 billion euros; however, components also show a key role (350 million euros in 2021), along with medical products (680 million euros), among which the greatest weight is occupied by pharmaceuticals, which reached 490 million euros in 2021, doubling the 2020 value.

Definitely noteworthy, finally, is the segment of food goods (packaged and unpackaged), which put together moved a turnover of more than half a billion euros in 2021. Italy is by far the leading European exporter for the packaged food goods segment, and one that could therefore benefit significantly from the abolition of tariffs and the protection of typical geographical indications, in which Made in Italy is strongly represented.

More than 3 years after the ratification of the agreements with CETA and Japan, in fact, Italian agri-food exports to the two markets have grown significantly: +30% to Canada since the entry into force in 2017, growing steadily also during 2020, and +6% to Japan since 2018 with a growth that in the first year had been 9%, then halted due to the pandemic crisis.
Therefore, the assessment on the benefits obtained by Italian companies is definitely positive, and the new trade agreement opens profiles of interesting opportunities.

Against a backdrop of strong growth in EU exports to the New Zealand state, the free-trade agreement soon to come into effect will result in EU exporters benefiting greatly from the immediate removal of tariffs, which translates into substantial annual savings for European exporting companies, which will have a competitive advantage over non-EU competitors.