The Swiss defence from smartphones and smartwatches invasion

The great product detail of ExportPlanning trade data allows us to monitor the evolution of consumer preferences worldwide, with deepening of country and of all consumption categories. In this article we will focus on a category that has undergone many changes over the last 20 years: the wristwatch.

Talking about wristwatches means talking about the Swiss industry. At the beginning of the century, Swiss watch exports did not reach 6 billion dollars, while in 2018 they amounted to 23 billion, with an average yearly growth of more than 7%.
If we consider that, during the same period, the average yearly growth rate of the entire fashion exports was 4%, it is clear that Swiss watches can be considered winning products.
Yet they had to face with three major challenges:

The Asian challenge of quartz watches

The Asian challenge in wristwatches originated in the second half of the 1970s, when the Japanese industry developed quartz watches. In the late '70s, a Swiss watch was a valuable work of art, with a complicated mechanical movement handmade. It took months or years of savings to buy it. In this context, the Japanese company Seiko introduced the quartz watches, cheaper and more precise than the Swiss mechanical ones. For the Swiss industry it was a real shock. The share of Swiss foreign trade collapses from 50% to 15% in less than a decade, threatening the survival of the Swiss watch industry.

The Swiss answer was a second watch, not an expensive jeweler object but a design one, elegant, seductive and innovative, available at a price that is accessible to everyone in order to create a fashion trend. The first Swatch collection was presented in Geneva in 1983. It was an immediate success and in a decade the Swiss electrically operated watch industry was able to regain a position on the podium of the world's leading exporters.

In parallel with the recovery of competitiveness in the market of electrically operated watches, Swiss companies have maintained their undisputed leadership in mechanical watches (in the segment of mechanical watches, 3 watches of every 4 sold worldwide have always been manufactured in Switzerland) and starting a progressive transformation of the product, from an everyday object to a status symbol. This transformation of the product has led to an increase of the average price of automatic Swiss watch, which have risen from the last century value of 400 dollar to the current 1600 dollars, supporting the price increase of the entire sector. The chart below shows the worldwide sales of electric and mechanical watches in dollars. 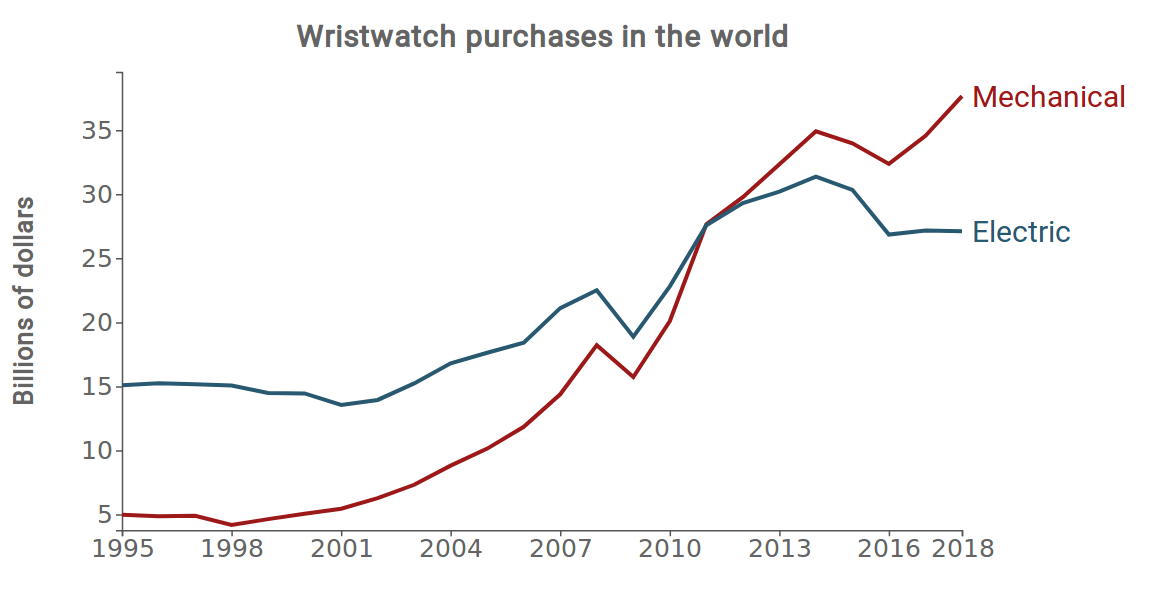 During the first years of the new century, world purchases of mechanical watches rarely exceeded 80 million units (compared to over 1 billion units of electrically operated watches), but the increase in sales price was sufficient to result in a high growth of value purchases. In 2012 , in fact, the value of purchases of mechanical watches exceeds that of electric watches and it approaches in 2018 $ 40 billion .

The use of the smartphone as a watch

The mobile phone was born in the last century, but only in this century, thanks to the evolution of mobile standards, it had a strong development. At the end of last century, less than 200 thousand mobile phones were sold each year in the world; in 2018, over 2 billion have been purchased, including 1.4 billion smartphones. Time has always been a basic feature of mobile phones and smartphones.
This has led many consumers, especially young people, to no more need watches. The effect was a drastic reduction of watches sales, especially the electric ones. On the contrary, the effect has been relatively positive on the mechanical watches purchases that, already in the last century, under the success of the electric wacthes, had changed their function of use becoming clothing accessories.

The introduction of wrist devices

The most recent challenge for wristwatch is the market introduction of wrist devices, both smartwatch and fitness-band.
The first indicate weather, who called the phone, what messages we received, what are the latest news. The second (but also the first), how many beats our heart has, how many steps have we come down or gone up, how many calories we have consumed, and so on. At the end of 2018, almost 300 million people have already bought one. Experts claim that their growth will be high, supported by the growing offer of new models that allow you to connect to the internet without the support of a smartphone in your pocket. The first effects on watches have already been seen, but only on electric watches, whose purchases in value have decreased from 30 billion dollars in 2015 to 27 billion in 2018.
No effect has been recorded on purchases of mechanical watches, which are protected from their increasing role of status symbols, they have increased from 34 to 37 billion dollars in the last 3 years.