Forex market: dynamics and trends at the beginning of 2019

Taking a look at currency market dynamics in the first two months of the year, major trends can be summarized as follows.

In Europe, in the face of a slight weakening of the single currency, the pound keeps strengthening: this reflects the progressive decrease of the risk of a no-deal Brexit.
The last developments that lead markets to consider unlikely that UK will leave the EU without a deal concern the 3 alternatives recently proposed to Parliament by PM May. From March 12 to March 14, British Parliament will vote about: 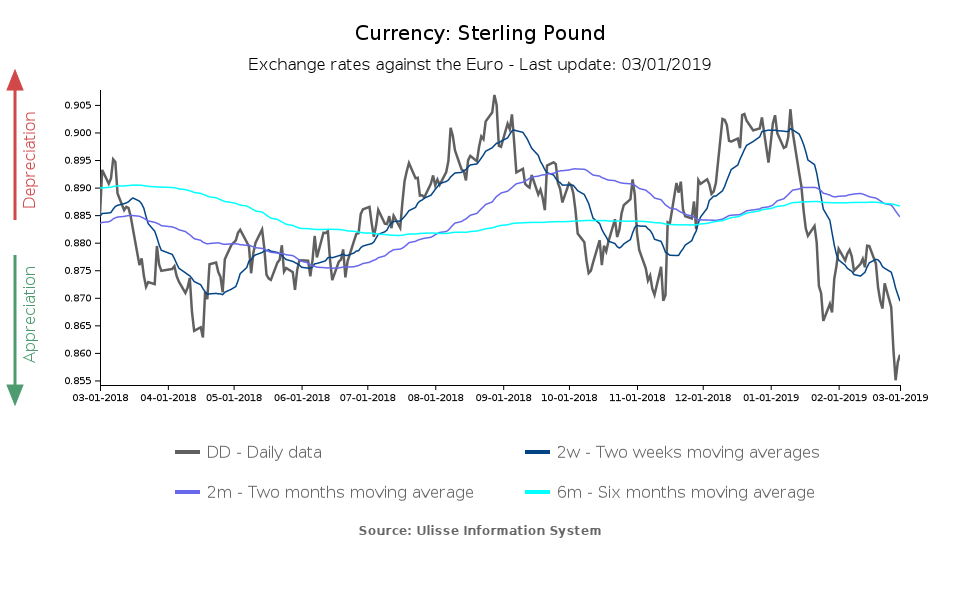 On the other side of the Atlantic, the dollar shows a turnaround at the beginning of 2019, compared to 2018. After a 6% appreciation in 2018 (effective exchange rate), since the start of 2019 the greenback lost almost 2% of its value.
This dynamics could reflect a slowdown in US growth rate, as you can infer from a slowdown in inflation (from 1.8% in Q3-2018 to 1.6% in Q4) and from the dynamics shown by the Purchasing Manager Index (USA). The PMI fell by almost 9% between November and December, while in January it remained at the same level recorded the previous month.

Yesterday, US economy’s slowdown has been confirmed by the initial estimates on GDP released by the US Bureau of Economic Analysis: after a 3.4% annual growth in Q3, the rate stopped at 2.6% in Q4. Possible reasons for this slowdown can be found in the vanishing of the effects of Trump’s fiscal stimulus, and in the impact of the trade war, that imposed economic costs on both countries in the mid-term. Nonetheless, US economy remains strong.

As regards eastern currencies, it is also worth mentioning the case of the Yuan. Unlike the dollar, the Chinese currency started strengthening at the beginning of 2019 (+2% in terms of effective exchange rate), after a phase of depreciation in 2018 as a result of the trade war with the US.
The dynamics of the Yuan reflects, among other factors, optimism about the possibility of an agreement with the US that, after months of talks, seems now close. At the end of February, Trump announced that he will postpone the increases in tariffs imposed on China - that should have been triggered today - given the satisfactory advances in bilateral negotiations.

....productive talks, I will be delaying the U.S. increase in tariffs now scheduled for March 1. Assuming both sides make additional progress, we will be planning a Summit for President Xi and myself, at Mar-a-Lago, to conclude an agreement. A very good weekend for U.S. & China!

On the other hand, Japanese Yen has been showing signs of weakening during the first two months of 2019. Nonetheless, recalling the appreciation recorded at the beginning of the year, which confirmed the role of the Yen as a safe-haven currency, the dynamics of the last two months are not surprising: they can rather be explained as the currency returning to normal, back to 2018 average levels.