To estimate market trends for wastewater treatment equipment and components, ExportPlanning modelled raw data to create aggregate groups of goods that are used, inter alia, in the construction of wastewater treatment plants e.g., tanks, barrels or vats with a capacity exceeding 300 litres; pumps for liquids; water filtering or purifying apparatus1.
While not providing a precise picture in terms of numbers, this method gives clear indications about the trends that the sector is experiencing. 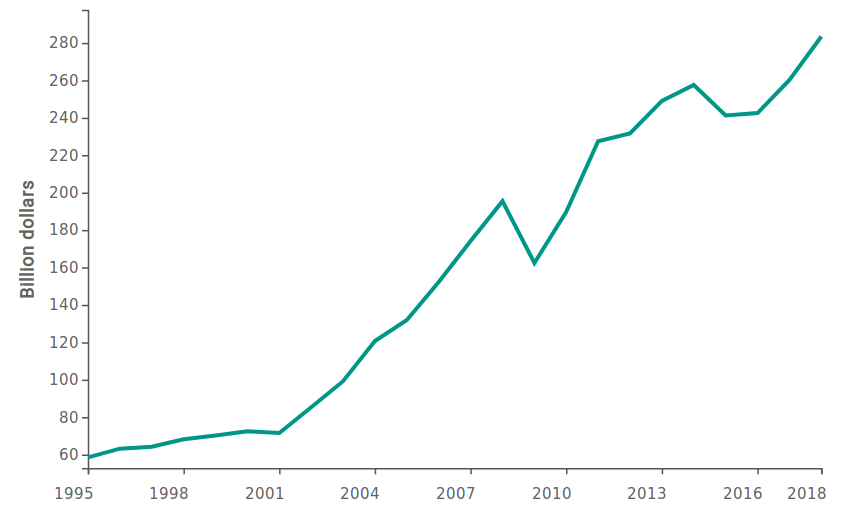 It can be seen from the above graph that world trade in wastewater treatment machinery and equipment has more than tripled in the last 20 years, from $70 billion in 1998 to $280 billion in 2018.
The United States, Germany, China, Mexico, Canada and France rank as the largest importers. Nonetheless, these countries have not shown strong growth rates in recent years: between 2012 and 2018, the compound annual growth rate (CAGR) of their imports was moderate, ranging from 2% in Canada to 6% in Germany. On the contrary, it is developing countries that have shown the most dynamic performance in the last 7 years, as the following graph shows.

Wastewater Treatment Machinery and Equipment:
CAGR (2012-2018) and value of imports in 2018 (estimated data)


Although the demand for wastewater treatment machinery and equipment in developing countries is still limited, a clear trend can be identified: Central African, Middle Eastern and Southeast Asian countries are increasing their imports of wastewater treatment technologies much faster compared to other market players. As their economic development moves forward, their environmental awareness increases and so too does their need to fight water scarcity.

The role of the EU

In the context of growing demand, the EU plays a significant role: its exports of wastewater treatment machinery and equipment amounted to $115 billion in 2018 (40.6% of total world exports). In the 2018 ranking of the world’s 10 largest exporters, we find 5 European countries: Germany leads the EU and world rankings, exporting $43 billion worth of wastewater treatment technologies, followed by Italy with $10.5 billion. Great Britain and France export close to $8 billion each, while the Czech Republic has over $6 billion.